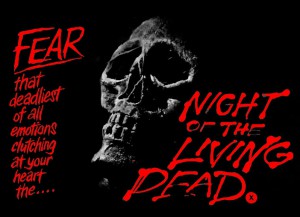 Part I of some tips for the troops from the leader of the Orange Brigade ~ R.C. Murphy

As you can see, the living dead are not walking amongst us. They are not banging down farmhouse doors in search of flesh to sate the unrelenting hunger that drives them. Right this moment the dead are doing what they do best; staying dead.

However, signs of the pending Zombiepocalypse are popping up around the globe. Birds are falling right out of the sky. Fish started doing the glossy-eyed backstroke. Bees are making themselves scarce. While some might argue the last as a good thing, others are concerned. Rightfully so, we think.

That is why we at the ZSC are encouraging members to get to know the enemy now, before the first zombie rises. Obviously there are no animated corpses for us to study, however there are numerous films and television programs that will suffice until the time comes to kick some undead butt.

Thanks to George Romero and his Dead series of movies, most of us grew up knowing only one kind of undead menace. In Night of the Living Dead the Romero zombies were slow, stupid, and died pretty darned easy once one learned that you had to damage the brain to kill them. However, these zombies did something none of the others have. They evolved. Or more accurately, they re-evolved; becoming a shadow of the human they were before death. Romero zombies (as of the 2009 release of Survival of the Dead) are smart enough to use crude weapons. However, these zombies are still lacking speed and death is certain if the brain is damaged, making them the easiest breed to dispose of.

Movies with a similar breed of zombie are Zombieland (2009), Shaun of the Dead (2004), and Fido (2006). The cause of resurrection is unknown in this breed of zombie. Theories abound. Some consider it an alien attack. Others blame radiation from a meteor. Whatever the cause, the virus that mutates the dead is unpredictable. It will kill the host slowly, painfully. Resurrection time after death seems to vary, even within the Romero series, which is considered the “zombie bible” for some fans. The best course of action if one of this breed bites a fellow crewmember is to dispatch the victim with a single bullet to the brain. This will save them from agonizing pain and ensure they do not rise from the dead to gnaw on your kneecaps.

A lesser-known breed of zombie is the Nuclear zombie. This breed consists of humans that have been mutated due to exposure to nuclear waste or radiation from a nuclear bomb. Examples of Nuclear zombies can be found in Dance of the Dead (2008), I was a Teenage Zombie, and the short film “Zombie Prom” (2006). Like the Romero zombie, these undead move slowly and retain little of their human selves. (Except for “Zombie Prom”, which is an adaptation of a stage musical. Yes, dancing zombies, folks.) Killing them is simple, blunt trauma to the skull/brain.

Nuclear zombies infect victims in a similar method to Romero zombies, by swapping bodily fluids. Not as disgusting as it sounds, though you won’t see any of us lining up and offering to play lunch buffet for a zombie. The radiation that resurrects the zombies mutates their saliva and blood. Exposure to nuclear waste or radiated bodily fluids of the undead turns you into one almost instantly.

That is the conclusion of part one, lesson one. Take your time to research the zombie breeds we have covered. Visit again tomorrow for part two of What Breed of Zombie Is It?