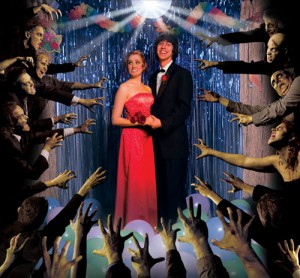 Another subspecies of the biochemical zombie is illustrated in the Resident Evil movie franchise (based on a video game series, however the infected in the movies and games differ a little. We’re focusing on movie examples here, though the games are nifty as heck!). These zombies are infected with something called the Tyrant Virus, or T-virus. The T-virus was created by a private corporation, not a scary government agency, on the off chance of a bio war, but not intended to be spread on home turf.

Humans and animals infected by the T-virus are a lot like Romero zombies. The virus kills the infected slowly and then works to resurrect the corpse. They are insatiable, devouring live flesh as quickly as they can get their hands on it. This need constantly propels them forward. A T-virus zombie is rarely, if ever standing still. The contagion is spread via bodily fluids (bites, scratches, blood exposure). However, unlike other zombies of any breed, there is a known anti-virus that is already in production. Infected persons must be injected with the anti-virus before the infection kills and revives them.

T-virus zombies can be neutralized in the same manner as Romero zombies. They will also succumb to spinal damage. We suggest a lot of target practice with your weapon of choice. If surrounded by this subspecies they will quickly overwhelm you. Take them out swiftly with a single shot to the head or through the spinal column.

Biochemical zombies can be further studied by watching The Crazies (2010), Planet Terror (2007), and Zombie Strippers (2008). Each film has its own variation of zombie. We think this is because there are numerous contaminates at play. Proceed with caution when approaching a biochemical zombie. Many of the viruses are airborne or able to contaminate the water table.

That is the conclusion of part two, lesson one. Take your time to research the zombie breeds we have covered. There make be a pop quiz next week. (or not. I loathe quizzes.) Visit again soon. Next time we will be covering more in depth ways to dispatch the undead using films and video games as our study material.