It has come to our attention that there is a commonality to The Walking Dead cast made up humor, intelligence and just plain chutzpah.

Every time the Zombie Survival Crew reaches out to take on a cast member (think IronE Singleton, think Anthony Guajardo) we seem to get just a little bit more than we bargained for.

Steven Yeun is no exception! 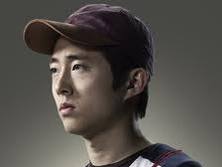 Steven – from all of us on the #zombiesurvivalcrew – THANK YOU for doing this, for taking the crew’s craziest questions and putting them back with panache! You will forever have an honorary spot on Command’s rapid response team!

If you had to choose two of your cast mates to accompany you should a real zombie apocalypse occur, who would you choose and why? Thanks for taking the time for questions!

– Hi Jennifer!  This is hard, also this question could get me in a lot of trouble.  Man, could I take everyone?  I know it sounds lame, but I really would want everyone.  But let’s see, to just answer the question.  If I were to look at it from just a survival angle…then I would probably bring Jon (Shane), because he’s basically gonna take care of the protection issue.  Then, I would bring Jeff (Dale) for the wisdom end.  He has a home in the mountains in real life, I imagine he would have tons of knowledge on survival.  Also, he is awesome.

Steve my man! You are awesome as Glenn! This is not a knock by any means, but dude you look just like the art in the books when in character! Great season! Great job and acting! Loved your line “what did you do before this? Delivered pizzas.” You are probably the smartest and most savvy of the group and could probably lead, while Rick and Shane squabble next season over Lori! My question is are you into the zombie genre at all outside of the show? If so and you had to prepare for a real zombie apocalypse what would be your top 3 items to have at arms’ reach at all times?!

Thanks so much Harley!  To answer your questions, I think I am a very mild Zombie genre fan.  I really dug 28 DAYS LATER when it first came out and also SHAUN OF THE DEAD, but how could you not right?  To be honest, however, I haven’t really scratched too much into the genre.  What would be my top three must have item’s be?

1) A shotgun (loved shooting those things)

2) A bat with a large nail spike on the end of it.

3) And finally a bindle.  So I can carry other loot.  I imagine maybe you could reason with Zombies to leave you alone, because you’re a train jumping hobo with a bindle?

What was it like to work with such an amazing cast? And who is your favorite character on the show?

It was pretty awesome to work with the cast.  I honestly said to all of them, “Hey I’m gonna just be a sponge on you guys so please drop any knowledge whenever.”  And they did. They taught me more than I could have ever learned in maybe 2 years of theatre school.  It was great!  My favorite character on the show right now would have to be Shane.  He’s just so twisted up in his reality, it’s awesome.  Jon is doing an amazing job.

What is your favorite zombie movie?

SHAUN OF THE DEAD – BAM

Which cast member did you become the closest too?

I would have to say I’m pretty tight with Jon Bernthal.  He kind of was a big brother mentor to me while we were there as was Andy and Jeff.  But Jon and I would play basketball on the off days together and we’re the only two that live in LA.  But, to be lame again.  We all sincerely bonded on set.  Every single cast member.

(ZSC note: This was obviously an attempt by our furry little friend to win an ally in her blood feud with the Twitter Dixons)

Squirrels are great!  They forage for nuts, they are responsible and keep nut treasure troves for the winter.  They are fast and they can climb up trees.  What’s not to like about a squirrel?

What did you learn about yourself (as a person, as a survivor) while filming The Walking Dead?

Great question, Alta.  You know, I think I came to the realization that will power and determination can get you very far.  I was very nervous to be on set because I was kind of the newbie of the whole group.  But I think being able to humble yourself and accept your position and be open to advice and learning is very important.  So, because of that I was able to accomplish a lot and also push myself to points I didn’t know I could get to.  I think that translates to being a person and also being a survivor.

Hey Steve! I am wondering if you think you’re anything like your character on The Walking Dead? And what would you like to see happen with Glenn as the character grows? Thanks for answering some questions from us!

Hi Delaney!  I totally identify with Glenn.  I think of him as my 19-21 year old self.  I was very much like him, just kind of a kid trying to make his mark on the world by proving himself in whatever capacity he could at that point.   I would love to see Glenn start realizing his potential.  I think he could be a natural leader, I think he takes cues from others and digests them so he can bring them out in his own way.

What would be your weapon of choice in the case of a zombieapocalypse? And why?

Hmm… my weapon of choice would have to be a rocket launcher.  Because if they work like they do in video games then I’m all set!

Have you ever experienced any challenges related to your ethnicity in the business – such as being stereotyped in terms of casting?

Sonya, nice question.  It definitely is challenging.  There have been a lot of instances in my career where I was put in a position where I had to choose between getting a job or doing something I didn’t want to do.  I think it’s unique to each individual but, personally for myself, I am not a fan of doing an Asian accent.  I believe there are instances where they are redeemable, but most of the ones I have run into so far are not at all.  So, in the situations I deferred to not doing it.  It’s a personal choice for me and I am fortunate enough that I was afforded other opportunities so that I might be able to pass on those things, but definitely something that was a continual struggle for me.  Also, sometimes I had the feeling that people didn’t take me seriously at first because of my ethnicity.  Then after they saw me they realized that I could do what they wanted.  So I really do believe that that general prejudice exists out there.  As to why?  There are probably a million answers to that.   What I have learned though throughout this whole short process so far is that there is progress being made and that it’s on me and other minorities to keep sharp so that we can deliver when we need to.  Also, it’s on us to create our own content.

If a zombieapocalypse was unfolding what items would you absolutely “have to have” in your go bag?