Chief’s Note: the decision to publish the following assessment from ZSC Member @Wulfie_ was not taken lightly. She has inadvertently uncovered internal Command structure and planning secrets. Retribution is not out of the question.

Let’s face a few things here. No matter how the Zombie Apocalypse begins or ends it isn’t going to be pretty. Not all of us are going to make it.

Sure, we have the Zombie Survival Crew. We’re gathering forces, training, getting ready to defend ourselves. But there will be battles, and casualties. People we care about will go down and, if they rise up again, are we prepared to take them out? What would you do if one of our Commanders, or First Lieutenants, got infected and decided you’d make a nice snack?

Last week Neil Brown Jr. delivered a valuable dispatch designed to help us survive in the event of a cataclysmic global event. With that in mind I’ve written a report profiling the ZSC officers we look to for advice, protection and communications. Yes, they’re well trained, but if they become infected with the zombie virus, we need to know how to protect ourselves. This is especially true if the zombies we have to deal with aren’t just shamblers but intelligent walkers. 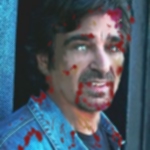 David Della Rocco is the one who’s going to catch us off-guard because, while we’re rearing back from his zombie appearance, he’s going to be throwing out the funny one liners. Being stressed out by the apocalypse is going to have us off our game and one good joke will have us snickering, then chuckling, then laughing our backsides off. He’ll be making some wise crack about The Walking Dead. We’ll be trying to hold ourselves up because we’re laughing too hard and that’s when he’ll get us with his weapon of choice: the chainsaw. Watch out for the zombies who can make you laugh; they’ll kill you with the jokes first and their teeth later. 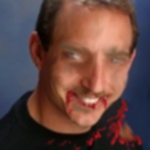 Jim Burleson is trouble from the get go as a zombie, or otherwise. He’s gifted at orchestrating major events which means he’ll be the one putting together the zombie attack plans. His secret weapon is a Ball Pein Hammer. Ouch. The problem in dealing with him as a zombie is that he’s smart enough to have designed a plan hidden within a plan that’s hidden within another plan. By the time you figure out something’s going on, you’ve got a hammer slamming you between the eyes. This one needs to go fast, if he’s turned, or we’re all dead. 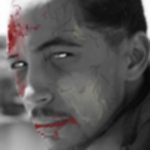 If Neil Brown Jr. gets zombified, he’s going to be on the front lines of any planned attack because he can bring it. Our lead vato is going to go ballistic and run off in all directions trying to find out whose fault it was that Neil got turned. (It will probably be Jim Burleson’s fault because he’ll know what a strong zombie Neil will make.) Neil’s dangerous as a mere mortal; put him in a meat suit that doesn’t feel pain and he’s going to cut loose with his martial arts as soon as he’s used up his katana. If he isn’t drop kicking you into your next life, then he’s going to be charming you with that hypnotic voice and calm demeanor, and will probably talk you into believing that it’s a great idea if you allow him to bite one of your fingers; after all, you’ve got nine others, right? Either way – you’re dead meat. 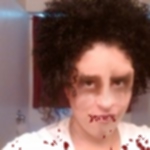 Pauline Campos is our first female zombified Lieutenant. Don’t be fooled by her gender. She’s got a Mexi-fro that no man in his right mind could resist. While said male is distracted by that and trying to help her with her diaper bag, she’s going to be nibbling on his appendages and shooting anyone who tries to stop her with her .45 ACP pistol. As a former newswoman, she intuitively knows where the action is and the best place to position herself to get to the…meat of the matter. Watch out for this little hottie from hell should she be looking in your direction with zombie eyes. 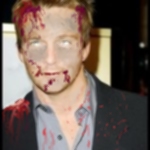 Sean Patrick Flanery as a zombie? All I can say is head for the hills, kids! I’ve seen this guy in action and, the way he takes out a Jedi Warrior with his mad skills, none of us stand a chance. Jus’ sayin’. Besides, having 2 black belts in Karate and Brazilian Jiu-Jitsu, this guy is walking death to the walking living. After reviewing his portfolio, I’m betting that the first thing he’ll do if he becomes a zombie is to infect his specially trained assassin dog, Donut. Don’t let the name fool you. If you see Sean coming…shoot AND run because if you don’t take him down with the first shot, you’re just going to piss him off. Donut will catch you and be gnawing off your leg, while Sean sidles up to finish you off. If Sean goes Zombie, it’ll take a fleet of us to bring him down. 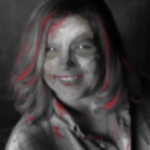 LK Gardner-Griffie was abducted into the ZSC at the point of a crossbow. Not a good sign. If she’s zombified and teams up with Jim Burleson, we might as well give it up…unless they’ve been brain damaged. Because if their brains are in tact then, between the two of them, we’ve had the meat…er…become the meat. She’s got files on us and, if she happens to retain that information, she’s going to know exactly who each and every one of us are and where we live. She’ll assemble groups of Geeks to take us out one by one, moving from the most threatening down to us lesser munchies. If she actually happens to own a functioning flux capacitor…we might as well slit our own throats because the attacks will be like something out of Star Trek. Teams of zombies will be beaming in and out. We won’t know what bit us. In fact, it’s a safe bet that we’ll be zombiefied before we even realize we’re dead. LK will be at the very top of our Most Wanted list if she’s turned. 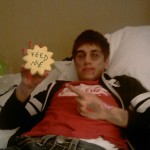 Don’t let Anthony Guajardo’s youth and pretty face fool you. He never goes anywhere without the protection of his dogs and is extremely dangerous, as proven by the fact that he has survived encounters with Daryl Dixon and “T-Dog”. He may look innocent, but he’s not. Be wary of him because when he’s not side-tracking you with the cuteness, he’s going to be hacking away with his machete looking for some finger food. 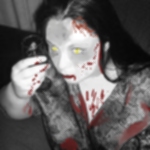 RC Murphy’s weapon of choice of is the sword but she seems to have a somewhat unhealthy obsession with our fearless leader’s sacred crossbow. This one hides behind a facade of outrageously funny mood swings and ADD tendencies. The trouble here is that it’s a clever ruse masking the fact that she’s actually psychotic. Several of her other personalities are made of the stuff that no one, and I do mean NO-ONE, on the ZSC wants, or is prepared to deal with. Don’t be fooled by her mild mannered wife and mother persona. There’s some real evil in her lusting to break free and being zombified might be just the thing that does it. Watch out for this cutie. Trust me on that. Also…avoid the Z’s. 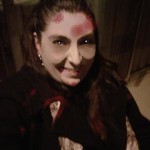 Ah yes, our beloved, multi-tasking and somewhat flighty Jinxie_G. Self-proclaimed creator and destroyer of worlds. On top of being an Amazon, she’s proficient with the compound bow. Being nocturnal and constantly pumped up on caffeine and nicotine makes her hyper-vigilant. As long as she’s one of us, we’re fine. But if she goes zombie, I’d suggest the duck and cover technique. A grenade, or explosive of some kind, might be our only choice in taking her down as a zombie. The problem with this is, she has a gaggle of supernatural buddies who can step in at any time and kick our collective butts. Our best bet is to make sure, she’s not Turned. 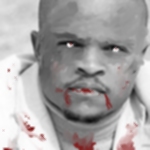 IronE Singleton’s weapon of choice is the up-close-and-personal hammer. YIKES! Add his willingness to get a bloody facial to his passion for work, life and family and he’s a formidable opponent. He’s one of the most huggable on the crew and that makes him more dangerous than all the others. The shortage of hugs during any apocalypse makes IronE (a.k.a. Mr. Huggy) particularly dangerous. Watch yourselves! He might look like a teddy bear but embracing this zombie is a fast-track to zombification. 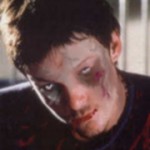 Now we get to Norman Reedus. Oy! Norman’s weapons training, crossbow abilities, and his gift for remaining clear and focused on missions makes him a valuable commodity to the ZSC. He’s an expert survivalist which, I’m sure will save our butts if we’re on the run. He handles stress swiftly and directly – though I have to wonder what’s going on behind those eyes when he’s just sitting around in silence. I believe Norman would make the most dangerous zombie of us all.  In character as Daryl Dixon he’s shown patience, reserve and a willingness and ability to set his personal feelings aside and just get on with surviving. But I think he’s got a long memory and is capable of a multitude of surprises that could prove dangerous if he’s pushed too far. Right now he’s on our side and doing his part. But all of us need to remember that he doesn’t need us and he might very well be better off without us. We’re liabilities to him and I’m sure he knows this. At the same time, in the event of a zombie attack, he’ll have a few bodies to throw at them while he makes his getaway. As a zombie…yeah…I’d be totally unable to predict what he’s capable of so let’s try to make sure he stays human – that’s dangerous enough. 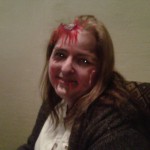 Our fearless leader, Juliette Terzieff, the humanitarian. She is the official leader of the ZSC and that’s an understatement. She might be known for running around in circles screaming, but don’t let her fool you. She’s not flighty. She’s not overwhelmed. (Tired yes, overwhelmed, no.) There are things we don’t know about her; things she has hidden from us – a move any good leader should make, by the way. But let’s remember that she’s been in actual war zones and heavily involved in international politics. While her human heart is humanitarian, I’m positive her zombie heart would be zombitarian. As the leader of the ZSC, she’d be a primary target for an intelligent zombie invasion.  She’s the one that knows everything about everyone, including information that the rest of us don’t have access to. Information that she may, or may not, share with those under her immediate command. She could turn zombie and set us all up for the biggest fall yet and none of us would know it. As a zombie she could infect each of those closest to her, until the rest of us are wiped out. If that happens it won’t be long before she’s giving out bags of human meat instead of the bags of chocolate that her human self awards us with. Keep an eye on Juliette. Don’t let her height fool you either; one round of ChaCha Ferrigno and you’d be zombie food.

Moral of this report, friends and neighbors? Watch your back and don’t forget for one second that, despite our best efforts to organize and band together in the event of the Zombie Apocalypse, any one of us could become a casualty.