The following letter was received from a crew member over the weekend. We can confirm that while attempting to aid commander R.C. Murphy, Grae Wolffe (@grae42) was targeted by the UGA. While we are unsure of how they knew of his involvement, the photo evidence is proof enough. Someone is watching every move we make. Commanders and crew members alike must remain vigilant.

The truth is out there…

At least that’s what they keep telling us on television. But I think it is reverse psychology at work; “They” don’t really want us to know the truth, but prefer us to stay in a semi-ignorant state, stupefied by reality tv and celebrity gossip. There are some shows out there that try to keep us prepared, but very few people seem to take those seriously.

I was recently introduced to a small group of proactive thinkers, planning ahead for the inevitable apocalypse They don’t want us to know is coming. This crew is dispersed throughout the world, in small pockets, and in a short time have gotten organized and prepared to handle the reality behind this veil of secrecy They are keeping from us.

Who they are is as much of a question as what they have planned. Is it some mega-corporate conglomerate, or some Unknown Government Agency pulling the strings in clandestine fashion until such time as They feel empowered enough to announce Their presence to the masses? We who have been duped all this time need to wake up to the reality behind that veil They try to keep in place. 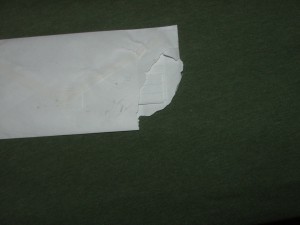 The envelope pictured is proof that someone out there is monitoring the correspondence of the Crew. I am a relative unknown in this arena, only recently becoming involved online. But in my first attempt to provide assistance to one of the leaders that envelope was the result.. and it didn’t even make it out of the town I live in. This is the measure of Their influence already.

If They are this aware already, have infiltrated to such depths as to affect things on the local level at the town level, we must all prepare. The belief is this UGA Conglomerate has something nasty prepared, and indications are it will be some kind of pandemic leading to mass chaos – a Zombie Apocalypse.

So prepare now. Reach out and investigate for yourself.. Don’t get caught, be one of the survivors.