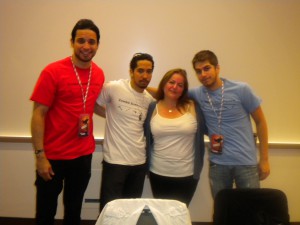 Dallas Comic Con started with a bang. As soon as the doors opened, fans of The Walking Dead came pouring in. I threw my arms around Juliette and forced her to stow the crossbow beneath the table, and tossed a “stand down” glare at the boys. Yep, the Zombie Survival Crew was in kill, er, I mean meet-n-greet mode alright. Within a span of less than 20 seconds we couldn’t see the Vatos –Anthony Guajardo, Neil Brown Jr, and James Gonzaba –through the crowd. I released Juliette and that’s when it hit me.

It was hard to know how to react. (Shush, Juliette, running in circles saying “oh my gods” is a legitimate way to react to the situation!) 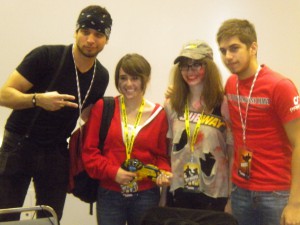 We dug in our heels and embraced the crowd. Well, and immediately eyed people we could tag for help, as much as they could. Huge, huge thanks to Veronica! Honestly, I have no clue how you managed to keep track of that system you set up. For all I knew you were doing it in hieroglyphics. (This may also be testament to how little sleep I’d had since Wednesday night. . .)

Lisa and Gilbert did wonderfully as ninja photographer and line wrangler, respectively. Seriously, we had to have a person to stand in food lines. They were THAT scary. Why didn’t anyone warn me of this? The rumbling in my tumbly was frightening! 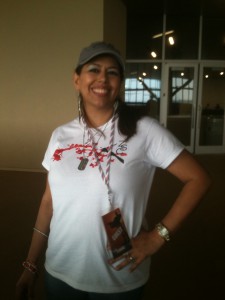 Before I forget, we need to thank the DCC volunteers. Fred, you were a god with that velcro! James, we never went dry. You kept us very well watered. Rebekah, thank you for talking to keep me awake. Stephen and Craig, you rocked…and Tracy, we would not have survived without you!

Saturday had a lot of highlights, not the least of which was Neil leading us in a rather loud rendition of Day-O right after our lunch break. Everyone out in the hall stopped just outside our door and peered in like the bunch of us had lost our minds. . . which was true.

The crowds at DCC absolutely loved the Vatos. James, Neil, and Anthony were brilliant. They handled every twist and turn with a smile. 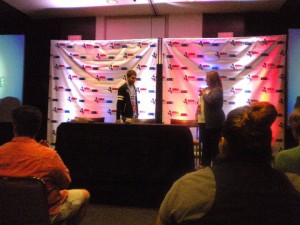 Media folks came by to interview them and walked away astounded with how nice the Vatos are.

At the last minute Juliette got drafted into introducing The Walking Dead panel. I’d be lying if I said I didn’t enjoy watching her squirm when faced with the large crowd and the microphone. She got lucky and we think nobody but me saw her trip-step off the stage when she was done. Neil, Anthony and James fielded dozens of questions from the fans –Anthony was sweeter than sugar, James was articulate and Neil kept the crowd roaring with his antics. 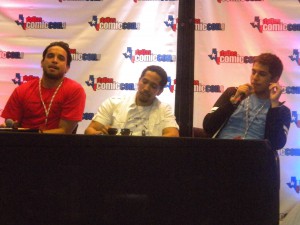 And, like Neil, we will repeat –we can neither confirm nor deny that the Vatos will be back for season 2 of The Walking Dead.

That night we all went out to dinner –after Juliette managed to have the strangest conversation ever with Thomas Jane as he took off his boots and socks in the hotel lobby. What? Yeah, you read that right. Let me tell you right now, it is impossible to eat with Neil and Anthony popping off jokes right and left. I almost had to call a time-out just to eat my salad without a tomato shooting out of my nose! 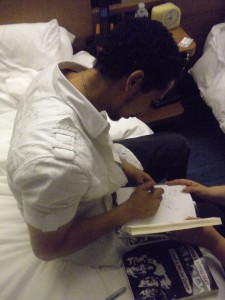 (not quite the pickle mishap Juliette had in Jersey, but it was close.) Juliette had to get up and leave the table a couple of times. I’m thinking it was the really loud rendition of Rick Springfield’s Jesse’s Girl that first made her run…no, wait. She’s the one who started it. That, and Neil’s onion rings. Don’t ask.

And because we are a bunch of lunatics, after dinner we went back to the hotel and… worked some more. We tackled a few important missions for the ZSC. Before you ask, no we can’t tell you what just yet. Patience is key. You will find out in time and believe us it will be worth the wait! After missions were confirmed completed (including the successful attempt to bring James on board with the ZSC) everyone loaded into the elevator and went down stairs to the party. Only we were still working! 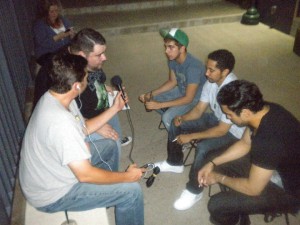 The guys had an interview with Nerd Heard podcast. We met Kenneth and Chubtoad (Richard) Friday night and right away they blew us away with how cool they were. That coolness passed on to their professionalism. We made quite a sight out by the pool, business-like while the interview was going on. It drew a few positive comments on everyone’s level of commitment to success. Yeah, your commanders kick backside and take names. All for you, ZSC faithful! 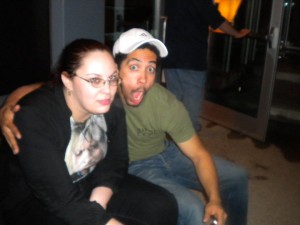 After the interview we all hung out at the hotel during an impromptu party. We, uhm, may have been the last ones to leave. Did your commanders pay the price for late night shenanigans? Just wait until you read about Sunday’s adventures.