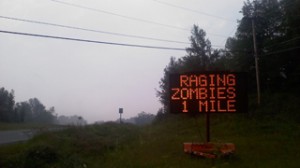 This sign was spotted in Danville, Vermont on Tuesday July 12, 2011. Once the local news was made aware and started to broadcast it, the sign was quickly changed.

All local news sources are now reporting that the message on the road sign is the work of hackers. And although many angry and even potentially violent people were spotted, the official word was that it was in response to long traffic delays and not a zombie invasion.

However, I remain skeptical of the official word as the only government official to make a statement was a bit vague in his response.

“No zombie attack has occurred, as far as I know,” chuckled Vt. transportation secretary Brian Searles.

I will continue to monitor the situation and will report any new developments as soon as I can.

Thanks to Blue Brigade faithful, Sarah Q for bringing this to our attention. All crew members must remain alert and report any signs of zombie activity to command as soon as known.

So, a lot of you commented on our Guess What’s in Rocco’s Go Bag contest, and boy, were some of you close. I know you were wracking your brains trying to remember that frantic moment in The Boondock Saints when Rocco threw whatever he could into a bag as Norman and Sean watched in amusement.

WARNING: graphic language and violence are in this video.

Well, David made his picks for the top three items in his Go Bag should the Zombiepocalypse arise.

David picked: a baseball bat, his guitar, and a canteen

How many of you are doing the *face palm* right now? 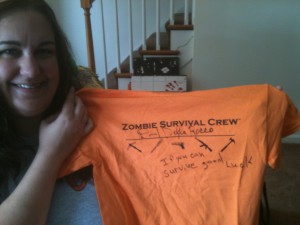 And the winner is………

Lora! For correctly guessing the baseball bat, and since she said bottled water, which we decided was close to a modern day canteen, she gets the prize. Congratulations Lora!!!