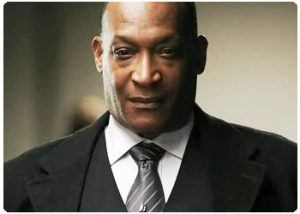 His deep voice stopped me in my tracks before the sentence was finished. “I believe we have business to finish?” I looked up to find Tony Todd smiling down at me. On several recent Zombie Survival Crew missions ZSC Commanders have had the chance to interact with Tony, discussing battle tactics and survival strategies with a bonafide zombie killer. With Tony’s history it was perhaps only natural that he initially view any Zombie Survival Crew with a bit of curiosity and caution.

When it comes to battle-tested, capable individuals you want by your side during the Zombieapocalypse Tony meets every desired criterion …and then some. He’s got brains, brawn, training and experience. And while he is known for playing tough guys in productions such as The Crow, Night of the Living Dead and Candyman, the truth is it’s the smile that really kills.

Tony’s years of fighting and, in some cases, being the undead give him a unique understanding of the battles we may face as the Zombiepocalypse unfolds and ZSC command is delighted to announce that he has officially joined our ranks!

While we work on defining future mission parameters with Tony, take a look at his latest feature film project, Sushi Girl! (You can follow Sushi Girl on Twitter (@SushiGirlMovie) and for more information go to the website: Sushi Girl Also, check out the trailer below: