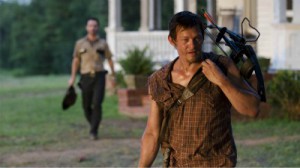 It has to be said, Greg Nicotero and his crew really, really, really outdid themselves for this episode. If you haven’t watched yet, just be prepared for a scene worse than Rick taking an ax to a decomposing walker in season one’s “Guts” episode. Oh, and don’t even think about eating. I had to leave a bowl of ice cream to melt on my side table.

With the nod to outstanding and epic grossness out of the way, lets dig into the meat of the episode. (Did you just gag a little? So did I. Promise that’s the last intestinal pun in this review.)

Can we address the Shane problem? Last week’s review lit off a small debate in the ZSC command center about whether or not Shane acted within reason given the circumstances he was in. I was hoping this week he’d give us a clear direction his head is going, but it became impossible to tell if the guilt eating him alive stems from using a good man as zombie bait or because he feels that he failed Otis in some way by leaving him behind. Later in the episode he tells Andrea that in order to kill you basically have to turn off everything that makes you human and act on instinct. The need to survive is a strong instinct, I’ll give him that. But… wasn’t there another way? A humane way at least?

This episode brought our core group of survivors back together. Once they were all gathered two people stood out, T-Dog and Daryl. T-Dog had a bad patch in the last episode, meaning he lost his ever-loving mind while burning up with a fever. Some of what he told Dale made sense in a way and that is what haunts him. The idea that because the group may see him as weak, it could cost him his spot with them. How rough would things have to get for any of them to look at T-Dog and, essentially, vote him off the “island”? He could simply be paranoid with a bit of brain fry from the infection… or maybe he’s got every right to fear being left behind.

Then you’ve got Daryl who seems from the get-go to want nothing to do with anyone on the farm, whether they are original survivors or part of the new group living there. As soon as they parked he was off into the woods alone. All of that progress he made being a decent man around Andrea vanished. Only thing I can think of is he fears opening up, at least until the Cherokee Rose. Daryl gave Carol a deeper look into himself than he has with anyone. Again he knew exactly what she needed to hear and gave it to her in this wonderfully sad story about the flower. He knows that crying won’t bring him Merle back, but also understands that Carol needs the tears to voice her grief, worry, and the sliver of hope that Sophia will come back. 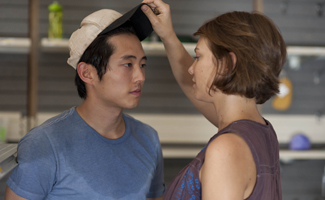 Seeing where everyone ended up this episode has me rethinking what I said about Glenn last week. I assumed that he would likely jump at the chance to ride at Rick’s side again when he resumes the hero role. Only… Glenn became his own hero this week. Sure there was a lot of awkward moments where he became really goofy and cute, however you’ve got to give the man a hand at lassoing a bloated zombie like that. We know he’s not exactly a smooth talker with the ladies, but Glenn is growing out of the sidekick role if he keeps this up. Go, Glenn, go!

I’ll wrap this up with a quick thought on something Hershel said to Rick. Faith seems to play a huge part in how Hershel approaches life. He sees God’s hand in everything around him. If a rainbow forms after a storm, God sent it. A car hits a man on his way to dinner with his wife; God decided it was his time to go “home”. But, you see, I cannot fathom how his faith holds up when faced with the animated corpse of someone he knew. Is Jesus cleverly disguised in the blood splatter and we just can’t see it because the need to survive has blinded us to faith? Or is Hershel clinging to the one thing he has left to give him hope for his family? That’s got to be it. Mankind will tell themselves anything to maintain hope, even if it means believing in a miracle cure that’ll never come, from God or mankind.