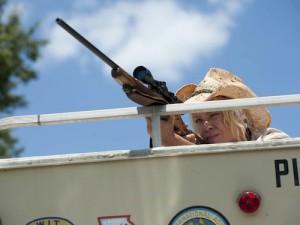 This episode had a lot going for it. A. Lot. So much so that I had to sleep on an idea on how to tackle this review. Which, by the way, didn’t help one dang bit. My head is still spinning. The writers for TWD are mean, mean people. I’m just going to jump right in and hope this makes sense.

Carol broached the subject of an internal power ranking system for the original group of survivors. For Hershel’s family, it is obvious who is in charge. With the other group it gets fuzzy because there are so many males vying for that top spot. You have to look at them like a pack of wolves. As Carol sees it, and others as well, Rick and Lori are the Alpha mating pair. Where it gets murky is trying to rank the rest of the group. Who is the Omega member? That one person left to fend for them self until they prove their worth, takes the brunt of everyone’s aggression, but also is there to ease tension in their own way. Can you guys figure it out?

Glenn and Maggie get a lot of grief this episode as people begin to connect the dots and see something brewing between the two. Maggie is treated like a child, scolded for making the decision to get close to someone not approved by Hershel. He has such a tight grip on everyone who lives on that farm that the idea of one of his slipping free to interact with the newcomers tweaks his nose big time. She’s lonely and wants to reach out to feel alive again after god knows how long of simply existing. Glenn flat out admits to Dale his reason behind wanting Maggie. Any day could be his last. In a world where the dead don’t stay dead nothing is certain, least of all tomorrow. That being said, poor Glenn needs lessons in wooing a lady. Maybe Shane, the ladies man that he is, can teach him a few things. Or not. Shane can gather notches on his headboard, but none of them are meaningful relationships. I don’t think he’s capable of that.

Speaking of, Shane makes a very telling statement about the passage of time after the zombie outbreak:

“It’s like we’re old folks, the people in our story are all dead.”

They’ve been living on the run for less than a year, from what I can tell. In that time everyone they knew, except for the family and friends traveling with them, have probably been eaten, turned to walkers, or just died. A year for your life to flip completely upside down and turn “I know her” to “I knew her”. It’s really a hard concept to grasp. This also means that time is not measured in days, but resources. 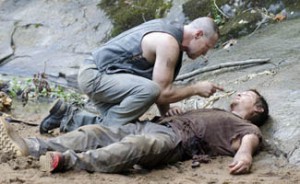 Rick’s guilt over leaving Sophia doesn’t cause Shane to lash out about time wasted, but people injured or killed during the hunt. Yes, people are resources, especially after you’ve established a camp and everyone has their separate duties to uphold.

I’d be remiss if I didn’t address the Dixon brothers. Honestly, when I heard Merle would be back I could not figure out how the heck the writers were going to make that one work. A lot of far-fetched things happen on the show, but the long-lost brother walking out of the shrubbery? Impossible.

[Slight spoiler below. If you haven’t watched, turn away now.]

That being said, how messed up does your family have to make you in order for your subconscious to kick up the image of your abusive, druggie brother to play cheerleader? I mean, it is very obvious that Merle never did anything to help Daryl, even when he was a child. Daryl has been left to fend for himself over and over again by his brother. So what the heck? Leaning on personal experience, I know how far one will go to prove to their sibling that they aren’t needed any more. Everything is moving on just fine without them there to muck up the gears. Even in the end of that scene, Daryl did not reach for Merle. He got himself out of the bad situation. Only to walk into another one that he has no control over. No Merle cheerleader to provoke him into action that time.

Normally I’m all about women fighting against gender roles and branching out to do “manly things”. Unfortunately, Andrea goes about it all wrong. She is very fragile emotionally, I get that. The last few weeks of her life have been spent planning how to opt out of existence so she can join her dead. Then Daryl pops some sense into her head, but she is still torn. If she can’t leave then she wants a bigger role; she wants to move up within the “pack”, so-to-speak. Her drive to be more nearly costs someone their life. Where is that line between challenging the “norm” and knowing when to fall back and follow orders? Andrea crossed it, no doubt about that. Will this incident throw her back into where she was or can she press on with her reforming backbone?

One last note… Who the heck is in the barn?! I want to hear your theories about the barn’s occupants. Next week we’ll see if any of us were correct.