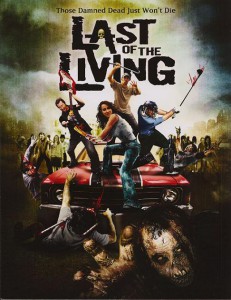 If anyone ever tries to convince you that the ladies from the ZSC are kind and forgiving, laugh at them. They have torture down to an art form. Normally, watching zombie flicks isn’t too bad. I’ve actually enjoyed the majority of them… until today. I tried to like Last of the Living, I really did, but there were too many flaws to do the premise justice.

Three guys find themselves the only survivors in New Zealand after a zombie outbreak. Their main nemesis isn’t the undead trying the chew off their faces, but total and utter boredom, having no one else to interact with. Or so they thought… Until they blunder into a church and miraculously find a scientist working to find a cure.

The three friends are caricatures. Bad ones. You have the egotistical actor, the shy nerd, and the failed jock/musician. Ten minutes into the movie I wanted to gnaw through their vocal cords. This is a first for me; I’ve usually made it half way through before becoming ravenously hungry.

On the zombie action front, there wasn’t really any. The undead got a couple decent jump scares, but for the most part they were just slow, cheesy, and apparently not very hungry. They didn’t attack so much as stumble into the lead actors on accident. Lazy zombies starve, someone should tell them that.

One thing that did work was the fact that these characters are so self-centered that they don’t seem capable of adapting to the fact that the world as they know it has come to an end. They spend their time ogling women in exercise DVDs and worrying about getting a copy of the latest CD from their favorite band instead of worrying about the long-term ramifications of what is going on around them, the apocalypse. That character flaw was the most believable thing written into the script.

I’m going to give Last of the Living two and a half bashed in heads out of five. The premise had promise, but overall execution just didn’t work. Parts where they could have been moving the plot along were filled with bad jokes. If you want a movie to sit and watch for the sake of watching a b-movie, oh and zombie farts, this is a decent choice.