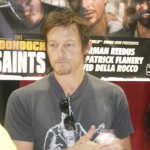 The only warning I got before tuning into a replay of this week’s “The Walking Dead” came from my mother, of all people. I told her I needed to catch up, she replied, “All I’ll say is, when Daryl is the sane one, you know things got bad.” With that statement in mind I tuned in… and quickly realized how right she’d been.

I’ll get back to Daryl in a moment, but we’ve gotta talk about Shane. This man strives to be the hero that Rick is, and fails miserably. He tries too hard. Doesn’t plan his strategy. Shane barges in headfirst and damn anything or anyone that gets in his way. That would be a good trait except for the fact that Shane’s motives are purely selfish. He didn’t go off to fetch supplies for Carl. He rode into the sunset, hoping that the display he made would get him back in Laurie’s good graces. I spent a good chunk of the hour grinding my teeth at Shane.

And because Shane has his head wedged, Glen is beginning to have an identity crisis. His main purpose in the first season was to be the sidekick to the hero. Well, our actual hero isn’t in the game. He’s sidelined with his family, holding their breath to see what the future holds for Carl. Glen can’t help there and he realizes it. The guy trying to be the hero isn’t, leaving Glen to flounder around searching for someone to connect to that he can help. It seems he’s found that in Maggie, but what will happen when Rick is ready to don the white hat again? Will his Tonto abandon the potential Maggie presents to be just a sidekick again? Only time will tell there. I don’t even try to predict what TWD’s writers will do. They’re kinda crazy.

Speaking of crazy… I can’t believe my mother was right about Daryl. It is a trip to watch this character slowly open up to the other survivors. From the get-go we were supposed to think he’s like his brother, but this episode shot that to hell. We actually see Daryl for the first time. It isn’t the hardass squirrel killer in those woods with Andrea, but an intelligent man who was given the short stick in life and still managed to make the best of it. The way he dealt with Andrea and her determination to opt out of life was brilliant. This is a character to watch, not that you guys weren’t already.

The overall tone of this episode was hopelessness. Each character had a moment when they looked at the world around them and the pressure became too much to handle. Our survivors are beginning to buckle. They are getting desperate and we all know that desperate people do stupid things. The next couple of episodes are going to be interesting, to say the least.