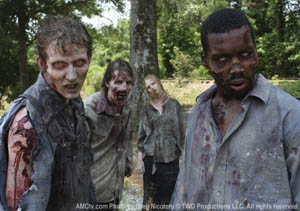 The first half The Walking Dead’s second season introduced us to some pretty epic zombies. I know none of us in Command will ever forget the Well Walker that burst in half before being dispatched by T-dog. Nor will we forget the final zombie of the mid-season finale. Truly heartbreaking, that one.

On the show, each of the featured zombies has their own story to tell. Right before the second season kicked off, the show’s creators produced a web-only series documenting the life, death, and reanimation of the walker we all came to know as Bicycle Girl. That got us thinking—which we do a lot right now while impatiently waiting for the second half of TWD season 2 to kick off. What better way to “know your enemy” than to create your own zombie? To take it a step further, how would you then put that zombie out of its misery?

So here’s the deal: We want you to create your very own zombie using any medium you are comfortable with. You can write a description, draw a picture, paint it, heck if you’re up to it turn one of your friends into your ideal zombie with makeup. The sky is the limit (please don’t really kill your friend…).

After you’ve created your zombie, then we want you to write out where the zombie would be found. Is she a soccer mom prowling the suburbs? Did a trucker pick up the wrong passenger on the freeway? You get the gist. Put them in a realistic location and then… kill them. You may use your weapon of choice to do the deed, or utilize the environment the zombie hunts in to find a suitable weapon. The more detail you use, the better.

The entries will be judged by a panel of ZSC commanders. We will pick the top two zombies. The first-prize winner will receive a t-shirt signed by 11 cast and crewmembers of The Walking Dead. The runner-up will receive a ZSC logo t-shirt (up to size XL). You have from January 10, 2012 until January 30, 2012 to create your zombies.