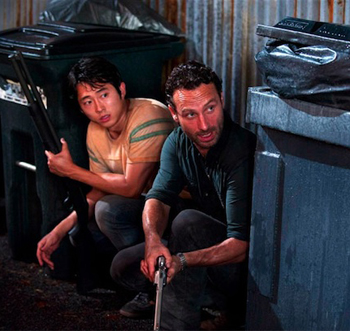 First things first… I must take a moment to applaud the folks at KNB EFX. The first walker we see in episode 209 is incredible. My inner makeup geek sat forward in my seat, watching how the walker’s face changed while it pushed through the glass trying to get… tsk, tsk. Almost spoiled things there. Needless to say, this episode in general is very detailed in the gore department. And I loved every drop of it.

Which becomes the biggest threat in the Zombiepocalypse, walkers or the living? The second half of TWD’s season 2 is focusing on this very question. A lot of complaints about the show include the now tiresome, “Where are all of the zombies?” For me, the real danger isn’t walkers. The living are far more cruel. They eat you up in ways the undead cannot. Humans destroy you from the soul out. Look at the road our survivors have gone down since the first season. Rick, in particular, went from an idealist who thinks everyone—even lost causes like Merle Dixon—can be saved to the brutally practical man we’ve seen the last two episodes. But then he lapses back into honorable cowboy mode… and nearly gets his backside full of buckshot.

Hershel Greene goes through a similar transformation after the barn incident. Actually, that’s not quite true. It took Rick tracking him down and their discussion about being in a hopeless situation that turned Hershel around in the way he approaches the changes in their world. He even goes so far as to give silent approval of the drastic measures Rick went to in order to keep not only his family safe, but Hershel’s as well. Will these changes stick? I think so. His confrontation with Shane towards the end of the episode strengthened the tentative bond formed between Glenn, Rick, and himself back at the bar. It also displayed to his family his shift in thinking about how to deal with the walkers.

Hershel seems to be finally be warming up to Glenn. It’s likely he won’t ever be happy about Glenn being involved with Maggie, but he didn’t let him get gunned down by the rogue survivors—who by the way are a prime example of how not to run a survivors group, folks. What distresses me, though, is Glenn’s insistence that he can’t fulfill his role in camp while being in love with Maggie. He’s finally stepped up to be more of a hero; he could be her hero in every sense of the term and now he is backing away from it. All because of that hesitation and the drive to keep her safe emotionally. I’m with Maggie on this one. His behavior is frustrating. It goes to prove that no matter how intelligent someone is they can be awfully stupid when it comes to matters of the heart.

Allow me a moment to profess my love for Carol. Out of everyone, she is the true survivor. Her personal story line through two seasons of the show is a series of moments where she’s kicked around, both physically and emotionally. This week she stood up for herself. She didn’t let Daryl push her around. Carol spoke her mind, tried to talk some reason into him. Daryl is uncomfortable with positive emotions thanks to his rough upbringing. So when Carol reaches out after denying him the chance to comfort her in her mourning, he lashes back at her. He must think she will be like everyone else in his life, users that don’t take his feelings into account before they act. Daryl doesn’t realize that Carol spent years of oppression comforting herself, that’s just her way. He pulled a jerk move, getting in her face as though he meant to hit her. He’s above that. It got what he wanted, though. She let him be after that. The men in this episode were aggravating, to put it nicely.

Okay, fine. I can’t end this without addressing the Shane Issue. Deep breath… here we go.

The last cog on Shane’s mental mechanism finally snapped. No, it didn’t just snap, it shattered into a million pieces. Humpty Dumpty has a better chance of survival than Shane’s sanity. His mountain of lies is beginning to topple over. The only one still buying them is Andrea and that’s only because she thinks that he’s got the secret to being a true blue zombie slayer—shut off your emotions. It’s impossible for Shane to see reality. He’s regressed into a fantasy world where he has a family that loves him and needs him to play hero. This must be a coping mechanism to make up for the fact that obviously Shane didn’t have much in the way of love before the walkers shambled onto the scene. A string of one-night stands does not make up for the lack of a loving relationship. The fantasy rotted his brain. And the most disgusting part of everything is Shane using his twisted love for Lori to justify the horrendous things he’s done to others.

Shane pushed Lori to the point where she can’t continue to deal with his crazy on her own. That last shot of Rick at the end of the episode says more than anything he could’ve said out loud. Things are going to get tense with those three. Who will be caught in the crossfire?

Have something to say about this episode of The Walking Dead? Add your own comments below.