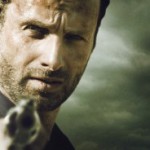 After weeks of waiting and gnashing teeth, AMC finally brought us back into a world where the dead refuse to stay dead and the living struggle daily to cling to that precious whatever that makes us human. To be honest, around the ZSC Command Center, we weren’t looking very human ourselves. Call it TWD withdrawals.

A brief recap before diving into the mid-season premiere: We left Rick and the gang in the midst of a pile of walkers with severe cranial leakage. Hershel and his family were aghast, watching how the others dealt with walkers. And the only hope for some of the survivors—in a tiny, innocent form—just met their final rest courtesy of Rick. Got that so far? Good.

The mid-season premiere picks up exactly where the previous episode left off. I know it may be wrong, but I got a bit smug being able to ask Hershel, “Still think they’re just sick after your wife attacked your daughter?” Yes, I talk to the television. Nevertheless, my main beef with Hershel came, not from his insistence in clinging to faith, but in his inability to look in the eyes of a walker and know that they aren’t human any more. Shane’s methods in forcing everyone to deal with this fact are faulty, but necessary.

I know I’m not the only parent that cringed at how matter-of-fact Carl became about what happened at the barn. He had one scene in the episode and it made a heck of an impact. Lori is right to be concerned about the coldness weaving into Carl’s childhood. However, she thinks Rick should be able to fix it by being there to do the hard things for him. In reality, Carl will still see everything his father does to protect the camp and want to be that person. He wants to be the cowboy hero. It could cause serious problems down the road.

On the parenting train of thought, I could not help but cry when Carol conveyed to Daryl and Lori how she planned to cope with her loss. It wasn’t a scene with ugly tears and a huge breakdown. It almost would have been more preferable to the controlled, calm way she spoke. That reining it in is what broke me. Her grim acceptance of fate took her to a different level where no one was sure how or if they could comfort her. Daryl, most of all, seemed hurt by the fact that he’d been denied that chance. In comforting her, he could have comforted himself and she left him out in the cold. Seeing where those two go after this will be interesting. He thinks he failed her and she’s lost her hope.

That anyone can contemplate finding love in the Zombiepocalypse seems ridiculous, right? Yet we have this wonderful love story building in the tangled vines of TWD. Glenn and Maggie are possibly the last bits of hope left on the show. Can their Romeo and Juliet love survive everything that is happening around them at the farm? She thinks so. He’s afraid. Not afraid of love, but what would happen if he lost her. Rick is right; he needs to tell her how he feels, despite the fear.

Time to address my least favorite subject, Shane. He is going to implode soon. Dale sees it and is well aware of what kind of man Shane really is under the hero façade he’s put on since rescuing Lori and Carl. How do we know it is a lie? Listen to what he says to Carol. Here is a woman that’s just suffered the greatest loss a woman can suffer and he only addresses her feelings once. The rest of that conversation is all “poor Shane”. Why doesn’t he get recognition for getting rid of all those nasty walkers in the barn? Wah, wah, wah… Dale called it. Unless Shane gets what he wants—Lori—he will probably kill again. Unfortunately by confronting him about it, Dale has put himself in Shane’s sights. 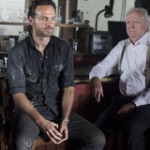 This episode was the death of hope for everyone. Hershel can no longer sit and pray that his wife to be cured. Carol won’t be able to console herself with thoughts that Sophia is safely tucked away in the woods, too afraid to find her way back to camp. Lori is stripped of the notion that Carl will not be forced to grow up too quickly. And Rick’s desperation to keep everyone safe takes a bullet to the brainpan. However, it is up to Rick and Hershel to face their families, those that rely on them… and lie through their teeth. They must create hope again. People cannot, will not continue to march down the long road unless there is a light at the end of the tunnel. For numerous survivors, not just our heroes, this hope manifests in Utopia-like areas where there is plenty of food, water, and supplies for them to create new homes. They don’t really exist, but gives people hope that somewhere out there safety is possible.

There were two OMG moments in this episode… which I can’t talk about without giving spoilers. Needless to say, they will make next week’s episode a must-watch.

What are your predictions for the next episode? Leave a comment and let us know.