For those of you who have been following the plight of Blue Brigade loyalist, Moira Jones, we received another communication from her last night. You may recall she sent the Zombie Survival Crew command a cry for help, and we are proud of our crew, because the response was immediate. Field reports came in and a rescue mission was mounted. Below is the communication record of a call received last night in the command center. While the situation seems dire for our brave crew member, we will not give up hope.

JONES: Oh, my gosh! It works! THE PHONE WORKS!

JONES: Hello? Are you… 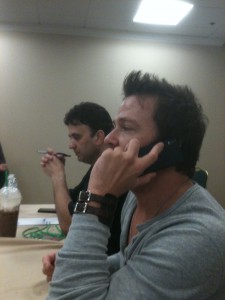 JONES: I think so, but I need your help!

FLANERY: Commander Reedus and Rooker have put together a retrieval team. They’re on the way to you now. Just hang on.

FLANERY: Moira? Are you okay?

FLANERY: Have you been bitten or scratched?

FLANERY: Oh kid. That’s okay. Hell, if you weren’t scared I’d be worried about you.

JONES: I wish Donut was here.

JONES: Will you stay on the phone with me until the rescue team gets here?

FLANERY: Of course, I will, kid. We just need to make sure you’re as safe as possible. Are you in a contained space? Can the walkers get to you where you are?

JONES: I don’t think so. The only way up to the sixth floor now is the stairs and I blocked the door. I don’t think they can get in.

FLANERY: Good. Now what we need to do is…

FLANERY: Oh no, what?

FLANERY: Moira? Can you hear me?