Review of The Walking Dead 306 “Hounded”

Talk about an action-packed episode. A lot happened in Woodbury and at the prison. To make things easier, I’m going to start with the Woodbury crew. 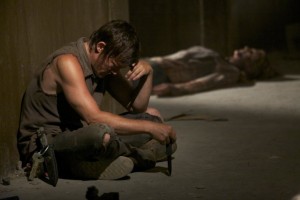 There is no love lost between Merle and Michonne. This week we’ve seen what happens when they attempt to hunt each other. They are equal in their abilities to fight and think like the purest of predators. Michonne is stealthier, able to use the wilderness to her advantage. She is also a very quick learner, collecting information about the walkers to use to her advantage. Merle isn’t that savvy. He’s all hack-and-slash. Anything that gets in his way ends up with a bullet in their head or that wicked arm-baronet he’s rigged.

Merle also has a very distinct disadvantage—he is a believer. This is a side of him we never saw until the Governor took him in, cleaned his system of drugs, and set him on a path to a specific purpose. Unlike Hershel when we first met him, Merle is not crippled by his belief in God. He knows during the end days, one has to look closer to earth to find someone to follow. His ten commandments came straight from the Governor’s mouth. Merle is happy to be a disciple in this strange cult that’s formed in Woodbury. He will go to any lengths to spread the word, even cutting down unbelievers like Michonne. Despite the fact that she could be one of their strongest allies in the fight to survive.

Andrea doesn’t see the cultish side of Woodbury. She thinks the darkest secret behind those tall walls is the undead MMA match we witnessed in last week’s episode. Oh honey, it gets a lot worse. No matter how much you dig, they’ll keep deflecting your questions; convince you there’s nothing amiss. For all of her time fighting, scraping by during the winter, Andrea is still very naïve. She wants to believe in the good in people—so long as that good goes toward making her life more comfortable. There’s an internal struggle she’s fighting. The need to have a place to call her own that is safe and the thrill of the kill, taking down walkers to earn her keep. The last time we saw Andrea fight this hard to prove herself, Daryl nearly had his head blown off. The Governor keeps a tight leash on his little army. She is too wild, too unpredictable. Will he tame her to suit his purpose?

It seems like he fully plans to tame her through…softer means. We all saw it happening long before it did. But I will admit, seeing both of them let their guard down long enough to have a private moment was surprising. Then again, how low were the Governor’s, I mean Phillip’s, mental walls? If he’s playing a game with Andrea, he is winning. She is utterly clueless and falling for each and every smooth line he feeds her. Someone needs to shake some sense into Andrea before it is too late.

Now let’s see what is going on in the prison with Rick and his crew.

Warning! There may be spoilers below. If you have not watched episode 306 of The Walking Dead, turn around and go watch it.

The sound of grief is different for everyone—a sob escaping as you walk past a spot that triggers memories of the one you lost, the roar of anger at your inability to keep a loved one from harm. It could be the deafening quiet filled with everything left unsaid before they left this world, or the sound of a kiss to remind yourself that you’re still alive.

The sound of grief may even be a phone ringing in an empty room.

Daryl’s way to cope is to jump into action. He can’t sit still and do nothing while the group stews in their grief. The show of emotion makes him uncomfortable. However, he doesn’t run from it, he acknowledges it. Daryl took Carl aside and showed him a glimpse of his past, just enough for Carl to know he has someone he can relate to. He is not alone, despite the loss of his mother. He will survive and grow to be a stronger person. Of all the people for Carl to look up to, Daryl is the first I actually want him to be like. He’s capable, smart (but not book smart), a quick thinker. Daryl also cares on a level no one else is capable of. How else would he be able to know at a glance that it is Carol’s knife in the walker? He does have a breaking point, but it is handled in private. His anger over failing Carol almost cost him the chance to find her again.

You have to look outside of your grief or you’ll be blind to important things.

Rick is beyond blind. He’s put himself into total isolation. That he remembered to clean up and speak complete sentences is a small miracle at this point. His gourd is cracked. No, it isn’t just cracked; he stuck that sucker in a blender and hit frappe. Rick’s behavior is causing some serious concerns. The minute Rick admitted to talking to someone on the phone, the warning bells went off in Hershel’s mind. We saw the thought on his face, “If Rick has snapped, what will happen to us? How will I tell everyone that the man we’ve relied on to keep us alive will no longer be able to help?” To be honest, I don’t think Rick can any more. When one begins to hear the voices of the dead calling, there’s no going back. You’ve passed Go, gone straight to the asylum—forget about the two hundred dollars.

The group will have to deal with a new face at the prison in next week’s episode. This arrival is what ties the two groups of survivors together and brings us one step closer to a face-off with Rick and the Governor. Can Rick handle it, though? His people need him to rally and save the day.

What do you think? Will Rick rise to occasion and help his people? Let us know in the comments below.