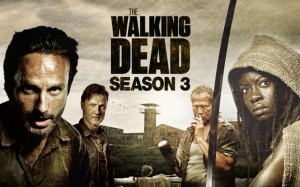 As hard as it is to believe, everything happening so far in season three of “The Walking Dead” was the calm before the storm . . . and the first arm of the hurricane swept through the lives of Rick and his crew in the newest episode. Hope you have something to hang onto. It is going to be a bumpy ride. 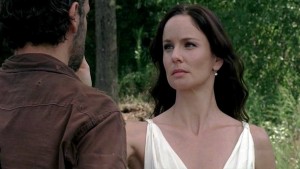 Let’s get this out of the way, the show hasn’t jumped the shark and added ghosts into the mix. Robert Kirkman clarified it on “Talking Dead” after episode 310 aired. Rick is hallucinating. There are various forms of hallucination. Rick progress from auditory hallucinations—hearing the voices of the group’s dead through the telephone—to visual hallucinations. He picked an image of Lori from a happier time in their lives to cling to. In other words, he’s cracked his gourd and is no use to anyone anymore. Even when Hershel pleads with Rick, he is reluctant to listen to reason. His eyes move constantly, seeking the comfort of his vision of Lori. It isn’t until the last moments of the episode, after the fecal matter hits the fan, when Rick’s eyes lock on anything other than his hallucination. But by then the damage has been done. 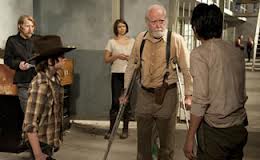 Being crazypants pulled Rick out of the running to be the leader for Team Prison. His second-in-command, Daryl, decided to go on a road trip with his brother. That leaves an old man with one leg, a kid, and the funny sidekick to try and keep the others safe. Glenn tried to keep everyone together, working on fortifying the prison. He also came up with the best plan to take care of the Governor—send Michonne to Woodbury to assassinate Phillip and cut the head off the snake slithering their way before it can strike. The problem? Glenn is working from a deep-seated revenge against the Governor. He would, if given the chance, forget about keeping everyone safe in order to avenge what was done to Maggie. Hershel sees this and calls him on it. When trapped in a corner and forced to think, Glenn backs down from his plan. Hershel is no Dale. He tries to guide Glenn to the right decisions. Their history makes it harder to convey what is the right decision, and just like Rick, Glenn is thinking three steps behind Phillip. 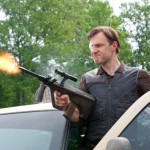 If Rick and Glenn are scrambling to keep up with the Governor, Andrea is about a mile behind and running in cement boots. She’s a smart woman, but she’s even more guilty at this point of letting her emotions blind her to the truth—Phillip is a d-bag and will slaughter everyone she’s loved because he has the power. Andrea was so focused on being the savior Woodbury needed, she never saw what she needed to in order to truly save anyone. One can only hope she catches up with the scheming of everyone else, or we’re going to see more graves pop up in the next few episodes. There are no saviors in war. There are people who believe they are doing good and are used as pawns, sacrificed by the kings in order to ensure their survival. 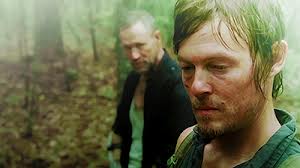 This was a huge episode for the Dixon brothers. From the get-go it was obvious Daryl had his fill of Merle’s Flavor-Aid and started to think for himself again. The brothers have drastic views of what is right and wrong. Daryl, for all his gruffness, genuinely wants to help others. He wants to make a positive difference in the lives of people caught in a bad situation. Merle claims it is Rick’s pansy behavior rubbing off, but I’m not so sure. When we first met Daryl, he was brash, loud, and angry. However, he hunted to feed the camp as a whole, jumped into fights to protect others even after failing to find his brother in Atlanta, and took care to be as gentle as possible with the emotions of the women in the camp—namely Carol. Merle, on the other hand, works from a selfish place and likely has since the day he left Daryl to fend for himself against their abusive father. Merle uses people to make ends meet, and if he can’t get anything from them, well forget those bastards. There is a kinder side to Merle, but so far we’re only seeing it around his brother. That won’t get him far with Team Prison, though.

Lastly, we have to say goodbye to yet another character. Axel’s death was so sudden, it took a good long time for it to sink in. Really, though, we should have seen it coming. Minor characters never get to have nice, cheerful conversations unless they’re going to bite the big one. The writers are horrible about making us like someone, only to splatter their brains across the pavement. Lew Temple really made us love Axel in this episode. It sucks to see him go so soon. 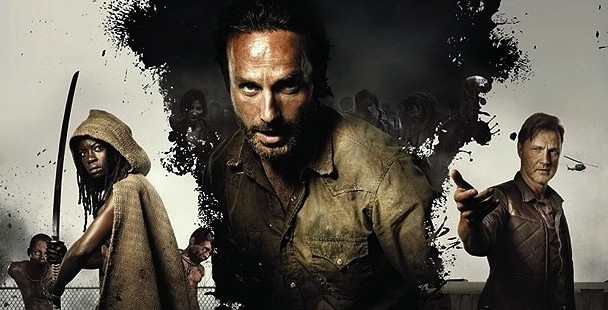 With Daryl back in the mix, who do you think will take the reins for Team Prison? Let us know what you think in the comments below.