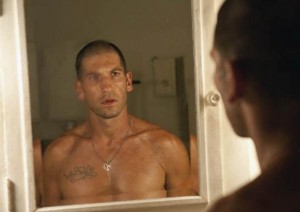 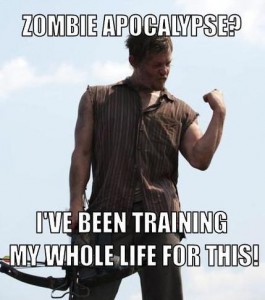 There’s a lot of chest-thumping and bravado that goes into preparing for the Zombiepocalypse. Even your brave Zombie Survival Crew commanders are not immune to a certain amount of arrogance about the skills we’ve added to our lives in order to defeat the undead masses. However, an ounce of humility will go further to keep you alive when faced with the end of days than a well-sharpened knife.

Humans are flawed creations. Eventually portions of our bodies just stop working properly. Even a healthy eighteen year old male could have a blown out knee, which won’t allow him to run when cornered by a herd of zombies. Not everyone is going to have the upper body strength to operate a bow and arrow with the precision necessary to kill a dust bunny, let alone food for your camp.

Divide and conquer. Have an open and honest conversation with your family and those in your camp, laying out any physical limitations each of you may have. If someone can’t lift more than thirty pounds, obviously they aren’t an ideal person to send off to fetch water. The guy with the bum knee isn’t going to make a good lookout if he can’t run back to camp and warn everyone. Everyone will be able to find a chore/duty in camp which plays to their strengths without crushing their hopes of survival because of a physical ailment.

Likewise, if you require medications for serious conditions, keep extras in your go bag. Every so often, refresh your supply—just in case. While on the run is not the time to find out your inhaler expired and is as useful to help you breathe as a mouthful of dirt. If you need a walker or a cane to get around, keep your spare next to the rest of your survival gear. The same idea goes for glasses, contacts, ankle/knee braces. Prone to sprained ankles? Pack extra Ace bandages in your gear. Clumsy? Make sure your First Aid kit is well-stocked with bandages, antibiotic ointment, and peroxide.

The stress of the zombie outbreak will only accentuate any limitations we have in the comfort of our homes. Just because some zombies are walking around, doesn’t mean we’ll all be transformed into Super Zombie Slayers. Life just doesn’t happen that way. It’s better to accept it now and plan accordingly. The alternative is stepping in to a situation you can’t physically fight your way out of. 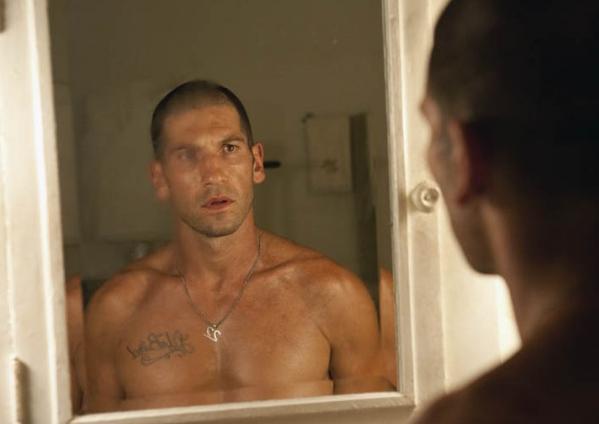 If The Walking Dead is any indicator, the character flaws we try to bury in our everyday lives will jump to the surface and do a little dance for attention. Personally, this is not a thrilling idea. However, just like our physical limitations, we need to prepare ourselves mentally for what could happen come Z-day.

Mental illnesses which you control with medication need to be planned for. As said previously, pack spare medications in your go bag, rotating out the supplies to make sure everything is within the expiration dates. You may also want to speak with your doctor for certain conditions to see if there are any natural remedies you may use in case of zombies. Though, if you’re going to your therapist and talking about zombies, it may cause a whole new set of problems on the mental health front. We’re just trying to cover all the bases on the off-chance something happens. Nothing that should overly concern mental health professionals.

Be honest with yourself. If you cannot cope with accidentally stepping on a snail, there is a seriously slim chance you will be able to pull the trigger when face to face with a zombie. They were people. Living souls we talk to, laugh with, love, and care for. Shooting someone, even for survival purposes, is not something one goes into lightly. You are still ending a life. Still putting yourself above the needs of another, even if they have been turned into a mindless eating machine. No one will be unaffected by pulling the trigger that first time. Even you macho men, thinking you’ll be the next Dixon on the block, will be changed after you kill your first zombie. Kind souls, those who cherish every life on earth, you’ll have the hardest time.

People who suffer from conditions such as bipolar or depression need to make sure others are aware. Those unaffected by these conditions will not understand when they accidentally trigger a bad episode. Life is difficult enough with depression, let alone adding in the stress of life on the run, fighting every day just to stay alive. Simplify things by making sure your companions are fully aware of your mental welfare.

In the end, the number one thing is to be honest with yourself and the people relying on you to survive. Do everything you can to pull your weight, but injuring yourself or causing mental duress in the pursuit of survival is not any way to begin a new life.