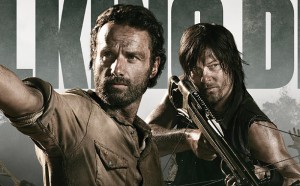 It is that time of the year again. The time when half of the entertainment industry—from video games to feature films—descends on San Diego with sizzle reels, swag, and actors in tow. “The Walking Dead” blew everyone out of the water with their epic four-minute trailer. What did the people involved have to say about the upcoming fourth season?

The producers hit the stage first at the hour-long panel on Saturday afternoon. The general consensus was season four would be, “Way crazier,” “Going to get insane very quickly,” and a series of escalations to keep the danger inherent in their world ever-present. Producer and FX genius Greg Nicotero hinted that the walker “gags” for the upcoming season are above and beyond anything fans have seen so far. As a matter of fact, the Thursday before everyone packed up to fly from Atlanta, GA to San Diego, they’d filmed a rather gruesome walker scene. Or so we were lead to believe. The producers remained rather mum about season four. Instead they let the trailer do the talking. 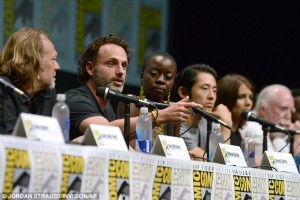 The cast couldn’t say much about the new season, either. They covered a lot about the previous season and coping with the numerous main cast deaths. It isn’t easy for the actors, they form bonds with these people in character and out. Then they’re suddenly gone. Danai Gurira admitted it was rough losing the person who’d indoctrinated her in the “Walking Dead” universe. But all of the actors understand early on, with the volatile nature of the world, people come and go in their lives. They have to go with the flow.

Going with the flow seems to be the theme for the upcoming season. They’ve brought in the survivors from Woodbury and built a city confined within the gates and walls of the prison. With the tension natural between large groups of people, all they can do is take it one day at a time. There’s no one person in the group capable of predicting human nature, any more than they can predict the walkers. Don’t assume this means the show will shift its entire focus to the dangers from the living, though. Everyone was adamant about the walkers still posing a significant hazard. The proof came in the trailer. Dang, those zombies are looking really ragged this season!