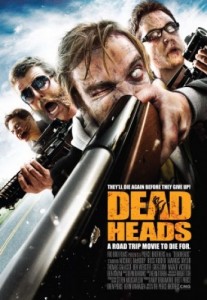 Awhile back, this movie came across the front desk of the ZSC—okay, their Twitter account. But with the insanity that’s happened since, it got shuffled under a pile of reports on zombie bunny behavior and lost. Well, they found it and passed it off to me to review. So how does Deadheads measure up? More importantly, what is the movie about?

A guy wakes up inside a lab and frees himself. He stumbles outside and discovers, not only is he undead, a lot of other people are too! However, Mike has been revived with his intellect intact, he’s not one of the mindless undead he encounters. Somehow he happens to stumble across the only other fully functional zombie wandering the woods, Brent. Together they decide to drive across the country and visit Mike’s girlfriend—almost fiancée—in Michigan, who is completely unaware he’s spent the last three years taking a dirt nap. But the trip won’t be easy. The corporation who owns the lab want Mike and Brent back, no matter what.

Deadheads is a love story, a buddy comedy, and a splatstick film…with zombies at the helm. They’re intelligent zombies who do far more than drool on themselves and fight over scraps of flesh like starving dogs. Actually, they’re pretty funny, too. Not as funny as I am. It takes a few years of being dead for the self-censoring mechanism to rot away. The dialogue alone is worth giving the film a chance. Make a game out of catching the massive amount of pop culture references.

The film raises a good question: If you were to come back to life as a zombie with all of your self—personality, memories, etc—intact, would you see it as an opportunity to make something of the life you were ripped out of? Would you reconnect with your family and loved ones? Here’s the thing, Mike’s girl never knew he was dead. She thought he’d left town. Anyone else attempting his mad scheme would cause undue trauma to the people they care about. Of course, with the limited exposure of the zombie outbreak—Mike and Brent are some of the first to escape and wander far from the lab—no one knows they’re undead or considers the possibility of them being more than sick guys on a road trip. Though, let’s be honest, they are covered in blood and Mike is sporting a pair of bullet holes in his skull. Middle America is seriously unobservant.

I have to give it to the filmmakers, Deadheads was shot really well. Despite being a “Zombedy”, it is almost too pretty—even when there are close-ups of severed body parts and intestines. Speaking of the FX makeup, it holds up to scrutiny. The main pair of zombies are “different”, not nearly as rotten as their mindless counterparts. Even then, the level of rot is believable and consistent throughout the adventure. There are som instances of computer-generated gore that fail to impress and could have been left out altogether. Zombies don’t bleed. Why they felt the need to add bad CG blood in one particular scene baffles the mind.

For the most part, the characters were written and acted convincingly. There is a zombie slayer who would fit in perfectly with Jinxie’s Yellow Brigade—she’d appreciate his ruthless tactics. However, two of the characters seemed to be created to annoy the ever-loving hell out of viewers, McDinkle and Emily. McDinkle is written to be obnoxious, that much is true. The overacting drove it over a cliff into a fiery crash of “holy hell, get this guy off the screen”. Needless to say, there was cheering any time someone hit him. Emily is supposed to be a frazzled, slightly ditzy and girly personal assistant to the main corporate bad guy. Done correctly, she would have balanced the malice of that character. Instead she is visibly acting, being a caricature instead of the character. After her first scene, I renamed her Food.

Overall, I’m giving Deadheads three and three-quarter decapitated heads out of five. This is a feel-good zombie movie you can sit down and enjoy with friends without worrying too much about grossing anyone out. I wouldn’t suggest children watch it, though. They curse more than sailors on shore leave.