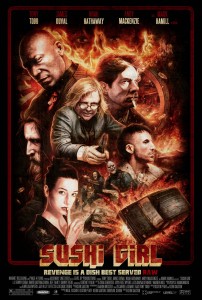 My guardian angel came in the middle of the night and dropped off a stack of films to review. Sitting on top was Sushi Girl, starring Zombie Survival Crew First Lieutenant Tony Todd. While it isn’t one of the usual zombie flicks the ZSC asks me to review, I gladly took the opportunity to support one of our own.

Fish has spent six years in jail. Six years alone. Six years keeping his mouth shut about the robbery, about the other men involved. The night he is released, the four men he protected with silence celebrate his freedom with a congratulatory dinner. The meal is a lavish array of sushi, served off the naked body of a beautiful young woman. The sushi girl seems catatonic, trained to ignore everything in the room, even if things become dangerous. Sure enough, the four unwieldy thieves can’t help but open old wounds in an attempt to find their missing loot.

Sushi Girl kicks off slowly, easing into a noir vibe — complete with flashbacks, intrigue, and mood-building soundtrack. In typical noir fashion, the film takes a few twists and turns, at one point hitting levels of gore on par with Japanese horror movies. The detail in the FX makeup is unsettling at times, giving viewers an eyeball-full of blood that’s sure to linger for a while. But the gore isn’t gratuitous. It is there to make the viewers uncomfortable, to drive home the idea that these characters will do anything to discover the truth about their missing loot.

The true beauty of the film comes from the cast, including a couple great cameos during one of the flashbacks. Tony Todd reigns as head badass in the motley crew of thieves. It’s a role we’re used to seeing Todd portray, but he does it so well, it is difficult to consider anyone else filling the slimy shoes of his character, Duke. Mark Hamill is completely unrecognizable in the role of the sociopath, Fish—with a few hat tips here and there to his great voice acting work as The Joker. His performance is the hardest to stomach, witnessing how far he delves into the joys of torturing a man.

The sushi laid out on the living platter didn’t seem quite as appetizing after watching the guys play their torture games. I felt like Rudolph, left to sit and watch the fun.

I’m going to give Sushi Girl 3 ¾ severed fingers out of 5. The story is well-written, with plenty of twists in what appears to be a straight-forward plot. Watch this one through to the end. You do not want to miss the final ten minutes and Cortney Palm’s moment to shine.