Talk about trying to give ZSC Command a collective heart-attack. This week’s episode of “The Walking Dead” was tense. It’s been no secret since season one of the show that every single character could possibly drop dead without warning. Fans are accustomed to fighting the urge to cling to a specific character, outside of Rick and Daryl, for fear their hearts will be ripped out whenever the writers decide it’s time for that character to go.

You know the drill. There’s spoilers down there, and they bite.

We went through this emotional torment with Amy, Sophia, Shane, T-Dog, Lori, Oscar, Axel, Merle, and Andrea. Despite that, some of us still pick favorite characters. And by golly, the writers keep trying to kill off a much loved survivor here in the Command Center—Glenn. We respect Glenn’s commitment to not only his fiancé, Maggie, but her family and all of the other survivors in the prison. He knew the instant Maggie saw how sick he really was, she’d risk herself and everyone else to breach quarantine and take care of him. They need her in good physical and mental shape. The council is shrinking rapidly, not that any of the others knew until Rick returned without Carol. Nevertheless, with Glenn and Hershel in quarantine, Daryl taking himself and two others, and Rick looking for supplies with Carol, that left Maggie the only council member to organize the healthy prison population. While we have no clue the actual survivor count at this moment, it has to be enough people that they need someone to wrangle them, keep them from accidentally setting off events that’d completely compromise the prison. Getting Maggie to understand that is another struggle. Luckily, she’s had her father’s example to learn from. Hershel is an excellent caretaker—putting others before himself, being patient, kind, willing to look a fool in order to calm someone down. But on the flip side, he won’t coddle someone. He tells them the truth about what’s going on. If he can spare them the heart-breaking details, he will. Only if they do not directly impact someone’s health or safety. With such a good example in their lives, it is no wonder Maggie and Beth are two of the saner, calmer people in the prison. 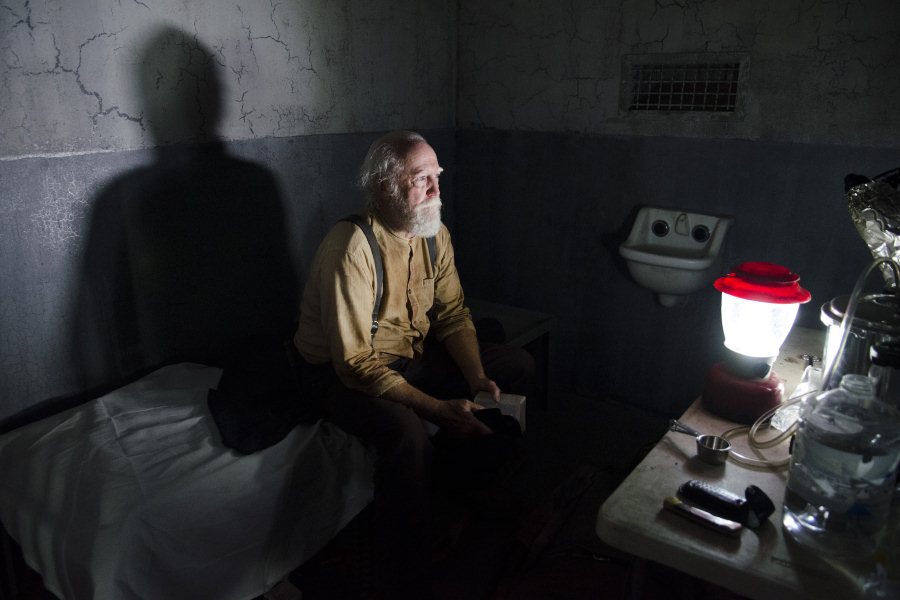 “A sad soul can kill quicker than a germ.”
– Steinbeck

We’ve seen this theme run through “The Walking Dead” since season one, episode one. Very early on in the series there were a few types of people in Rick’s path on the way to reconnect with his family. The survivors who scraped their lives into a bag and ran to safety. The unlucky who weren’t quick enough to escape and became walkers. And, lastly, the people who gave up. Moments before Rick found the horse he rides into Atlanta, GA, he came across an entire family who’d committed suicide in order to escape what they must have considered the end of days. “God Forgive Us” was scrawled on the living room wall where two of the bodies were found. Suicide became the easy answer for those whose hearts could not accept their surroundings. Jacqui and Jenner chose a quick death in the CDC explosion. Andrea tried to do the same, mourning her sister’s death so much she couldn’t function, until Dale smacked some sense into her. In season two, Beth cut her wrists after Hershel’s walker catch-and-release program resulted in the poor girl witnessing her mother die for the second and final time. The suicides didn’t stop this season. In episode 401, crazy as heck Clara killed herself with Rick as a witness in order to be with her decapitated walker-husband.

But suicide isn’t the only way people have been escaping the trying task of simply living day to day. The premiere for season two took the survivors on the road after the CDC explosion. When they hit traffic, they discovered numerous people still in their cars, desiccated and looking like they’d just given up on getting away once the cars stopped moving on the freeway. Caleb, Dr. S., took a similar route—for vastly different reasons—in the newest episode when he refused medical attention from Hershel. Instead, he insisted Hershel treat the others. Caleb gave up on himself, but not on hope. It was his hope that the extra time could save at least one other person suffering from the flu. Would things have ended differently if Hershel treated the doctor? Probably not. The flu is too strong to be denied its victims. Some of the people who died, were going to die anyway. They were too far gone.  But the time was what may have saved Sasha and Glenn, not to mention the IVs Caleb put together moments before he succumbed to the final stage of the flu.

In sticking with tradition, the writers snuck in a little tidbit at the end of this episode. Did you blink and miss you-know-who lurking outside the prison fence? The fires of hell are about to open up and swallow our favorite survivors.  All bets are off for the next few episodes.

As they stand now, do you think the prison population can survive another attack from humans? Let us know what you think in the comments below.