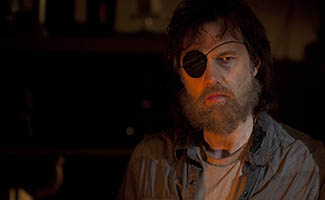 In a jarring turn of direction, the writer’s for “The Walking Dead” took viewers completely out of the prison and the lives of the people inhabiting the safe haven within the failing fences. We spent an hour catching up with the Governor, Phillip, Brian—whatever name he’s going by this week. The man changes his name as often as a woman changes her clothes an hour before a hot date. His identity changes with each new name, as well. We met a new version of the Governor in this week’s episode. But how much of that was for show?

Don’t look now, but there’s spoilers sneaking up behind you. Dangit! I told you not to look.

We picked up with Phillip right were we’d left him at the end of season three—standing over the corpses of the men and women from his personal army he’d slain after the failed attack on the prison. From there, it jumps to the next night, or possibly a week later, or a month. Hard to tell with the way the time line jumped back and forth at the beginning. Anyway, it becomes obvious something in Phillip is broken after the mass slaughter of his people. Disgusted, the two living members of his army pack up and leave him on his own. Over time, Phillip stopped taking care of himself. He grew The Beard. You know, the mangy, dead beast looking thing that seems to signify on the show when a male character has given up. Rick grew an impressive one before Michonne brought him a beard trimmer and not-so-subtly hinted that he looked like hell. What are friends for if not to tell you there’s a problem with the way you’re not taking care of yourself? Only, Phillip has no friends. He’s completely alone. The man doesn’t even have a home in Woodbury to return to. He burned it to the ground.

Miserable to his marrow, Phillip wandered on foot through walker-infested roads and towns. Honestly, that he survived at all with his obvious lack of will to live is amazing. He became a ghost, passing through, but never really affecting anything. Until he finds a family of survivors—Tara, Lilly, David, and Megan Chalmers—who are far, far too kind to him.

He tried to cover up his tracks when he burned Woodbury, like the fire would cleanse his foul deeds from his soul. When it didn’t work, Phillip tried for another method—being a decent human being. Something tells us this version of the man, the one known to this new family as Brian, is as close as we’ll ever get to seeing Phillip before the walkers took over the world. He’s soft-spoken, thankful, respectful, and helps when he can. However, the man still punishes himself for quite some time after being taken in, as though he doesn’t feel he deserves something as simple as a meal cooked by someone who genuinely cares about his health and safety. Kindness is not something he has experienced for a good long time. Even when he ran Woodbury, the nice things done for him always had a dark tinge. A taint stemming from the heavy-handed way he ran the town. It wasn’t a safe haven in Woodbury. Phillip turned into a small army base, with himself as the general.

There’s a moment where “Brian” is playing chess with the youngest member of the family, Megan. Suddenly everything about the previous season makes sense. He saw himself as the king, with Rick as the opposing king on the board. Phillip had his knights, rooks, and bishops as his personal circle of enforcers. The others were all pawns. Megan asked when he taught her how to play chess if you lost the game if a pawn died.

“You can lose a lot of soldiers, but still win the game.”

But he didn’t win. Not by a longshot. In war, there are no real winners. Everyone loses men. Life isn’t a game and it took a little girl and her family for that to start to sink into Phillip’s thick skull.

Time will tell if he’s truly learned how to change from the sociopath we saw at the end of season three. From the looks of the preview for next week, he hasn’t. It’s always hard to tell given the way the teasers are edited, though.

Phillip couldn’t look Megan in the eye when he first met the Chalmers. Why do you think he couldn’t? Let us know in the comments below.