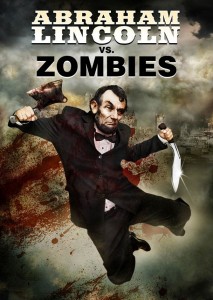 No, the title isn’t a typo. The Asylum pros at the horror mockbuster tackled the chance to pit Abe Lincoln against another form of undead after his stint on the big screen going stovepipe-to-fang with a bunch of vampires.

Synopsis:
Honest Abe tangoed with the undead as a child. Believing his nightmares were long behind him, he moved on to politics and became the 16th president of the United States of America. Now in the midst of the Civil War, the undead are back. They’ve taken over a fort the Union needs in order to gain an upper hand against the Confederates. Abraham Lincoln leads a small company of loyal men into zombie and Confederate territory on a mission to defeat evil once and for all.

The premise held so much promise, along with leading man Bill Oberst Jr. Unfortunately things didn’t mesh up well to make everything work. The script tried too hard to sound like a period piece, leaving some of the actors stumbling over their clunky lines. Some of the notable historical figures, like Abe’s wife, were a mess. I didn’t realize he was married to this woman until an hour into the film, long after she’d been left behind in Washington while Lincoln went on to slaughter zombies with his wicked-sharp scythe. A well-written script will give actors a chance to build a relationship in a short scene. What they were given sounded more like a conversation between friends, possibly cousins. It was not a husband/wife moment. A few other historical figures were sprinkled into the movie. Some were like chocolate chips in a warm cookie. Others stones in room temperature oatmeal. So much of the film was hit-or-miss.

A lot of the film’s action was delivered in dialogue. The zombie attacks are forgettable. I can’t remember one good kill, or a zombie’s actions that stood out from the others. The makeup was standard grey face with mottling, veins, and black blood—the same makeup you’d see at a mid-level professional haunted house during October. Some of the zombie costumes were questionably historical. The women’s skirts in general ran too short for the time period. And at one point, a group of soldiers walks into a whore house, sees the women (living women) in their corsets and underskirts, and acts like it is normal. If a film is going historical, everything needs to mesh with the time period to give it depth. And one of the lead actresses needs to not have her modern bra showing.

There were far too many TSTL (Too Stupid To Live) characters in the film. At one point, it became obvious they were only there to bring in a few more historical figures to play with. That’s well and good, have fun with history, but don’t dumb the characters down. The viewers want them to die, and in this film there were that many good deaths to justify idiotic characters.