These Walking Dead mid-season breaks seem to take longer and longer to pass. But here we are, back in the saddle . . . or rather, clinging to the couch cushions alongside 15.8 million viewers and partaking in the intimate, tense mid-season premiere.

Spoiler Warning! There, you’ve been warned. Proceed at your own risk.

Like the first half of season four, the second half is taking a step back from the grand full-cast episodes to focus on a handful of characters, delve deeper into what keeps them moving despite the fact that they’re at rock bottom. Starting from scratch after the prison battle won’t be easy, especially for those who relied on the council and Rick to keep them safe. This episode focused on Rick, Carl, and Michonne.

For the first time since her introduction at the end of season two, Michonne gets a little depth of soul. We’ve seen glimpses, primarily with Andrea and again after her friend’s death when Michonne reluctantly held baby Judith. Her dream/nightmare said more in three minutes about the south’s deadliest woman with a sword than a season and a half, filled primarily with her seemingly mindless zombie slaughter. It wasn’t until now that we know for sure she had a child, a lover, a friend she felt comfortable and joked around with. Most importantly, Michonne knew how to smile. How to love. A facet of the woman we’ve yet to see clearly. Even when she came around with gifts for Carl, they were found on hunts for the Governor. When she stayed with Andrea to keep the seriously ill woman safe before they went to Woodbury the first time, it was part kindness, part selfishness—she didn’t want to be alone any more. 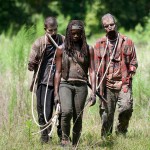 Michonne came close to losing herself. And why not? She’d watched the people she came to trust and care for under attack from artillery and walkers. Some of those people died. Some survived. But she has no way to know who walked away from the mass grave that was once their home. Andrea left her. Michonne put a sword through Hershel’s decapitated head. Every single person she opened up to deserted her. Even though they didn’t do it by choice, after so much loss a person begins to wonder if there is something inherently wrong with them, they’re the catalyst to their own pain. Somehow pushing their loved ones away to deaden themselves to the horrors around them. Michonne is a pro at this. Until now. She fell into her old routine. Made a new pair of walker friends to lead her safely through a herd of undead. All it took was a glimmer of hope, a muddy boot print, to shake her mind loose of the numb blanket she’d wrapped it in after saying her final goodbye to Hershel. Her moment of clarity didn’t come with a light bulb. It came in a blood bath where she slaughtered twenty-three walkers to keep herself from physically joining them. She’d already joined them mentally. 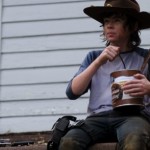 On the flip side, Carl left the prison slaughter ready to live, to kill anything and everyone posing a threat to him. And his father. Not that he’d admit it. Carl’s sullen teenager act hit a high during the episode. He had good reason—his father’s near-death at the hands of the Governor, friends scattered to the winds, Judith most likely a walker hors d’œuvre, and the loss of the only home he’d known since the day Shane and Lori dragged him out of his childhood home in King County, Georgia. Necessity put Carl in the role of protector, provider. Using the skills he gleaned from Shane and Daryl, he embraced the sociopathy his idols exhibited to secure not only a house, but an entire neighborhood. Throwing it in his father’s face, using Shane to yet again grind in the salt Rick’s deceased best friend poured in his emotional wounds, wasn’t exactly Carl’s shining moment. Everyone has a breaking point. Michonne’s came when she saw herself as a walker. Carl’s came when he thought he’d be forced to live alone. Watching Chandler grow into the large shoes Carl will wear on the show often leaves fans stunned. He digs into a pit of emotion most kids his age can’t access and leaves it all there for us on the screen. Major kudos to Chandler on his work in this episode. It is above and beyond his best, with better things to come, for sure.

We didn’t see much from Rick in the episode. His injuries were too bad. He needed time to recover and fell into something mirroring the coma he’d been in when the series began. Which is fine. Rick has been the show’s punching bag from the get-go. He physically could not be the top dog this time around. Couldn’t even bring down a walker when armed with an ax. Falling short in sight of his impressionable and rebellious son ate at Rick. What could he do? Nothing. For once, the right thing for Rick involved a couch and an extremely long nap. Arguing with Carl would’ve been a waste of words. The kid was in his own zone—a stubborn refusal to listen he ironically inherited from his father.

Next week, it looks like we’ll catch up with Beth, Daryl, Glenn, and Maggie. Get used to the small cast episodes. Robert Kirkman has said they’re playing with the show’s format, keeping the focus on a few characters at a time so fans aren’t cheated out of what makes them tick.

Who else do you think survived the prison attack that we haven’t seen yet? Let us know in the comments below.