The second half of Walking Dead’s forth season should, by all rights, be slow-paced. Right? There’s no way with the huge cast cut down to manageable chunks to manage huge, tension-filled scenes chalk full of blood, guts, and grief.

So far the second half of the season moves smoothly, with a few hiccups mostly to cut out unneeded moments best covered in dialog later. This episode focused on the new folks—Sgt. Abraham Ford, Rosita Espinosa, and Eugene Porter—along with Tara and Glenn, and Rick, Carl, and Michonne’s plan to get their bearings before moving on from their little slice of normality. 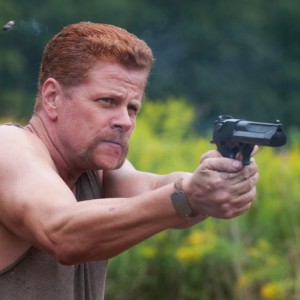 Last week, we were introduced to Sgt. Abraham Ford and his companions, but didn’t get much further than, “Hey, who the heck are these people?” In episode 411, there’s a lot more time spent with Ford, in particular. Right out of the gate, it’s disturbing how much he enjoys a fight. Tara called him on it when she noticed his smile during a walker (biter) attack.  Ford is a formidable fighter—mean and silent until he’s sure he’s got the upper hand. He wastes little energy on showmanship. And boy does he enjoy T.C.o.B. – Taking Care of Business when it comes to the walkers. What drives him? A personal vendetta against the undead? Or is he more like Lizzie, someone who kills because they enjoy it? Unlike the show’s pint-sized sociopath, Ford at least appears to care what happens to the people he’s taken under his wing. Not to mention, being totally gung-ho to deliver Eugene to whatever semblance of government survived this far past the original walker swarm. Yet Ford somehow fails to acknowledge Rosita’s emotional attachment. He’s isolated himself, drew everything in until he’s a laser, focused on the mission at hand. 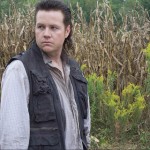 For his part, Eugene doesn’t seem as concerned with reaching Washington as Ford. He’s smart. Smart enough to know they can’t travel alone and hope to survive. Does he really have the answers Rick and his crew struggled to find back in season one when their last-ditch effort landed them at the doors of the CDC? This far in, there’s no way to know what’s going on in Eugene’s head. Or on his head. What is up with the mullet? It makes me not want to trust this guy at all.

Glenn doesn’t seem to trust them, either. He’s still weak from the flu, liable to pass out again at any moment. But when it comes to finding Maggie, he’ll walk straight into Mordor and knock on Sauron’s front door. Which he very well could be doing. There are no guarantees he’ll find his wife again. The hope instilled in Glenn from his time with Hershel shines through like the sun through storm clouds. How far can he walk fueled by hope alone? Three hours by truck is a far way to backtrack on foot. By then, Maggie could be anywhere. She’s not going to sit idle, hoping he’ll come across the bus. Glenn is ruled by his emotions, blindly walking toward whatever future rises over the horizon. The only way they’re going to have hope of finding each other is if one stops and makes a plan. Obviously, Glenn isn’t the one thinking about tomorrow. Only today. 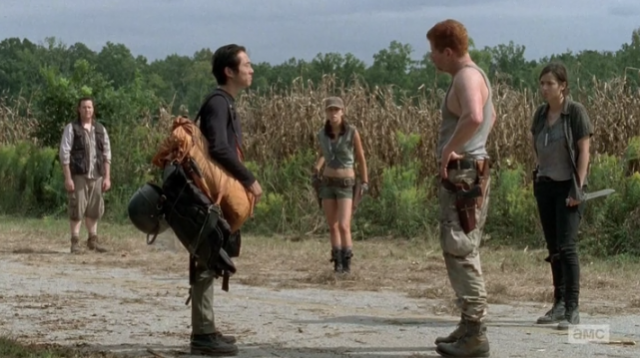 Better to live in the moment instead of haunted by the past. Michonne’s existence since the day she was introduced on the show has been dogged by what happened to her at the onset of the undead outbreak. Never once has she opened up about how she became the hardened fighter she is now. Not even to Andrea, with whom she spent months traveling and killing to survive. “I’m done taking breaks,” she told Rick. Michonne is finally ready to stop running from her past and embrace the future. A future she sees alongside Carl and Rick, apparently. For the first time ever, she reached out to someone else and vocalized her internal pain. Carl, for all his bravado, is actually a good shoulder to lean on. He’s eager to learn anything about his friend, to the point of badgering her. But he also knows she needs to do this. She needs to touch someone on an emotional level in order to ground herself against the tidal waves of pain the past sends her way. While in the process of bleeding the rot from her soul, Michonne doesn’t forget who she’s dealing with. She turns her soul cleansing into a game for Carl. In return for her mental growth, he learned how to better forage for essential supplies. Seems like a fair deal. 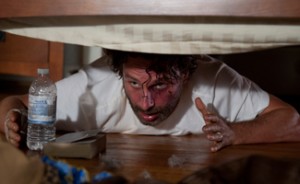 Unfortunately Rick doesn’t get a chance to witness the bonding between Michonne and Carl. He’s supposed to rest and heal after his beating from the Governor. Instead, he’s forced into flight-or-fight mode by a group of piggish intruders. These guys are bad news and we never really see them. The camera work during the moments when Rick dodges from room to room trying to avoid detection is well done, but slightly disorienting which detracts from the tension. Still, a very well done moment. It proved Rick isn’t ready to be put down like an old dog. He’s still in the fight, limping but committed to making it to tomorrow.

Several of the smaller survivor groups are headed in the same direction now. Dare we hope the crew will be whole once again? True fans of the show know better. Hope was decapitated long ago.

Why do you think Michonne lied to Carl about what she found in the pink room? Let us know in the comments below.