Sunday night posed a viewing quandary for many folks. When time came. Of course the ZSC Command Center TV was turned to AMC for the newest episode of “The Walking Dead.” Unlike any other episode in the series, this week’s featured only two of the main cast for the duration. Kudos to Norman Reedus and Emily Kinney for their performances. It couldn’t have been easy to carry an episode on their own—with a little help from not-so-friendly neighborhood walkers.

Wait a minute . . . . Have you watched the episode? There’s spoilers below.

The overall theme for season four seems to be acceptance. Not necessarily of others, as we saw in this episode, but of the circumstances life’s thrown their way and the deaths they’ve witnessed along the way. Everyone in this world had to step back and look at their lives objectively. What good would it do to be pissed at the world? Would anger put food on the table? Could it bring back their loved ones? Anger certainly can come in handy when it comes to killing walkers, as we saw with Daryl’s hole-in-one tee-off in the locker room during the middle of the episode.

But anger can also make one sloppy, careless. Beth has been working through the stages of grief since her father’s murder and the attack on the prison. The anger stage set her off on a mission—she wanted booze. It wasn’t an end to their problems she desired, just a drink to take the edge off everything she’s avoided confronting emotionally.

“All I wanted to do today was lay down and cry, but we don’t get to do that.” 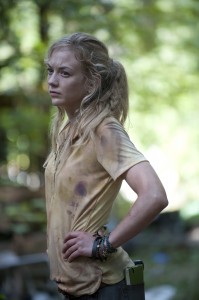 Beth’s ignored her feelings since early on at the prison. After they lost the farm, she switched her focus from what she needed to what others needed. It gave her a somewhat healthy distraction, but also didn’t allow her time to mourn her losses properly. Until now when it’s just her and a growly redneck traipsing through the woods. Now she’s got all the time in the world. There’s no kids to take care of. No food to cook. No home to clean. No one to talk to—let’s face it, Daryl is not Chatty Cathy. She’s stuck mourning all her losses at the same time, most notably losing the home she thought they’d remain in until someone somewhere came up for a solution for the undead problem.

Her mission for a “real” drink took them to a country club. Right off the bat, the place feels hinky. As they clear the building, picking up needed items along the way, it becomes apparent something horrible happened inside the club’s main building. Something not done at the hands of walkers. Even when death knocked at their door, the class structures inherent in a place like a country club—where the wealthy are given free rein to lord over the employees—were still in play. Through the dead Beth and Daryl found, we start to weave together a story told through the ages. The wealthy, when caught unprepared for disaster, were obliterated by those who felt their money made them less than human. How could anyone who never had to beg and scrape to pay the bills have any feelings? The reasoning isn’t sound. Frankly, it’s insane. The stress of survival does bad things to people. We’ve seen it time and time again in four seasons of the show. 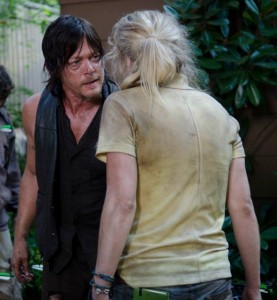 Daryl doesn’t often show typical signs of stress. He’s like a duck in water, letting everything roll off his back. Sadly, it’s always been this way for him. This week we finally learned what exactly Daryl did before the walkers came—not a dang thing, apparently. He tooled around with his brother Merle, causing mischief and doing nothing productive with his life. Daryl didn’t call the shots. He acted as a lackey for his drug-addled, loud-mouthed older brother. Possibly the most shocking part of the episode wasn’t any of the walker kills, or even Daryl’s borderline abusive attempt to teach Beth how to use a cross bow. Daryl talked about Merle and his father. He never talks about his family, and hasn’t mentioned his brother since Merle was turned walker and Daryl killed him. Dwelling on the past is not his favorite pastime.

Escaping the past isn’t so easy, though. The prison attack, all those needless deaths, it’s eating away at Daryl. He finally made something out of his life, finally stepped out free from his brother’s long shadow to fashion himself into an apocalyptic hero of sorts. Only to lose the majority of the people he’d agreed to protect. Beth told him, “I know you look at me and see another dead girl.” Because that’s all they’ve left in their wake from Atlanta to the farm to the prison, dead girls who couldn’t hack it. He saw this and tried like hell to save them. And failed. Listening to Beth’s resigned statements about her final fate, how he’ll be the only one of their group to survive, hurts Daryl on a level he’s not comfortable showing her. He doesn’t want to be alone. He doesn’t want to fail the family he’s chosen and fought for. Failing his blood family was bad enough.

Daryl and Beth vented, fought, drank, and finally came to understand what makes each other tick. This is vital to their continued survival. Beth won’t throw a fit and wander off to nearly be eaten. Daryl won’t try to take on too many walkers and end up at the wrong end of all those rotting teeth. They’ve got each other, now. No one else. They need to make it work or die trying to find a new place to call home. 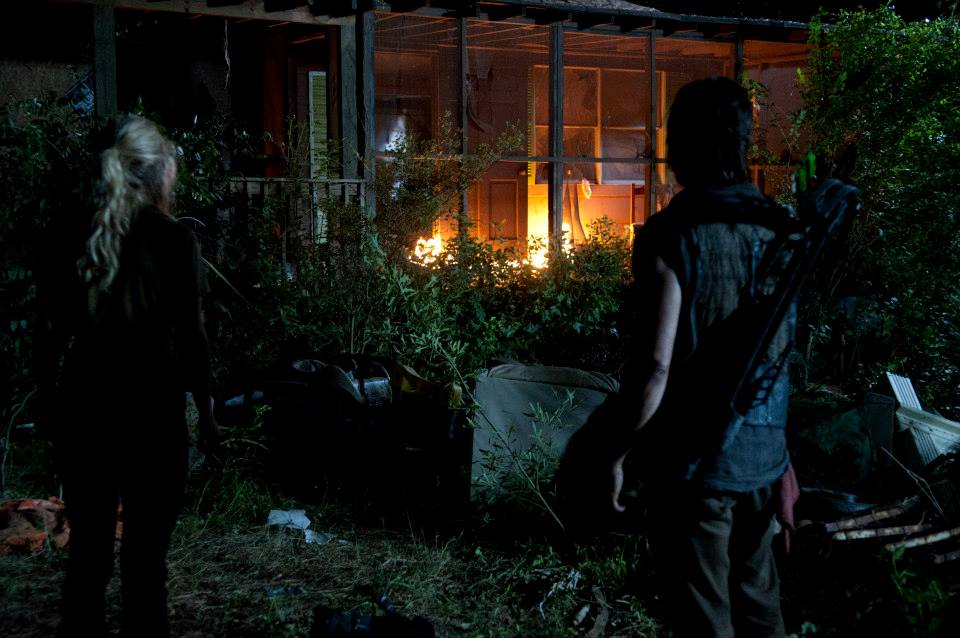 What did you think about having an episode with only two cast members? Let us know in the comments below.