Another season of AMC’s “The Walking Dead” has come and gone, taking bits of our collective sanity with it. For the first half of season four, viewers waited for the inevitable—the Governor’s attack on a now peaceful survivor group making a home in a rundown prison. The second half lulled fans into a false sense of security, slowing the pace to nearly a standstill until the finale. Was it a smart move? Hard to say. While the events in the finale were indeed shocking—ample amounts of yelling echoed through the ZSC Command Center—some fans abandoned ship (and hope) before the episode aired, stating there wasn’t enough action to keep their interest. With a few exceptions (Look at the flowers…) the second half of season four didn’t pack the same punch as previous story arcs. It led up to a heck of a plot twist, though.

You know the drill, there’s spoilers in this review. If you haven’t watched the finale, do so before reading on.

To dig the knife in fan’s hearts a little more, the finale contained numerous flashbacks to life at the prison after the Governor’s first failed attack. Hershel played a key part in Rick’s life during that time, and fans were treated to Scott Wilson’s return to TWD, if only for one last episode. Hershel was the one to turn Avenger Rick into Farmer Rick by pointing out the potential in the land within the prison fences. Seeing Hershel again acted as a reminder that no matter how much one does for others, in the end kindness won’t stop a bullet, or sword, from taking their life. 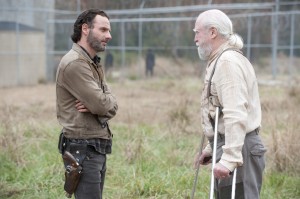 Hershel saved Rick, gave him something other than vengeance and death to motivate him, get him out of bed every day. Rick in turn attempted to save Carl the same way. We saw how well Hershel’s guidance worked. Rick withdrew from the inner-workings of the survivor group, true. But his focus laid on providing the group with something new, something thought impossible after months on the run—sustainable food sources. An idea we’ll touch on again when Rick and company hit Terminus, but for a whole different reason.

A huge part of the weight dragging down Carl and his father is the question, who are they now? Rick long ago abandoned his notion of being a good cop, that part of his personality slaughtered by Shane, Lori, and the Governor. Carl grew up the instant he killed Shane’s reanimated corpse to save his father, and turned even colder after he put a bullet in his mother’s head to keep her from coming back undead. They went from a moderately happy family (the tension between Rick and Lori was established in episode one) to a man and his son, both baptized in blood and gore. How can anyone come back from what they’ve seen, what they’ve done in the name of survival? What would they say to Judith—should they find her again—to justify their actions? At last Rick seems able to cope with the turn in their life. Carl still struggles, wondering what they’ll say to the people at Terminus when they arrive. Rick answers, “We’re going to tell ’em who we are.” Carl isn’t appeased. “How can you say that? Who are we?” 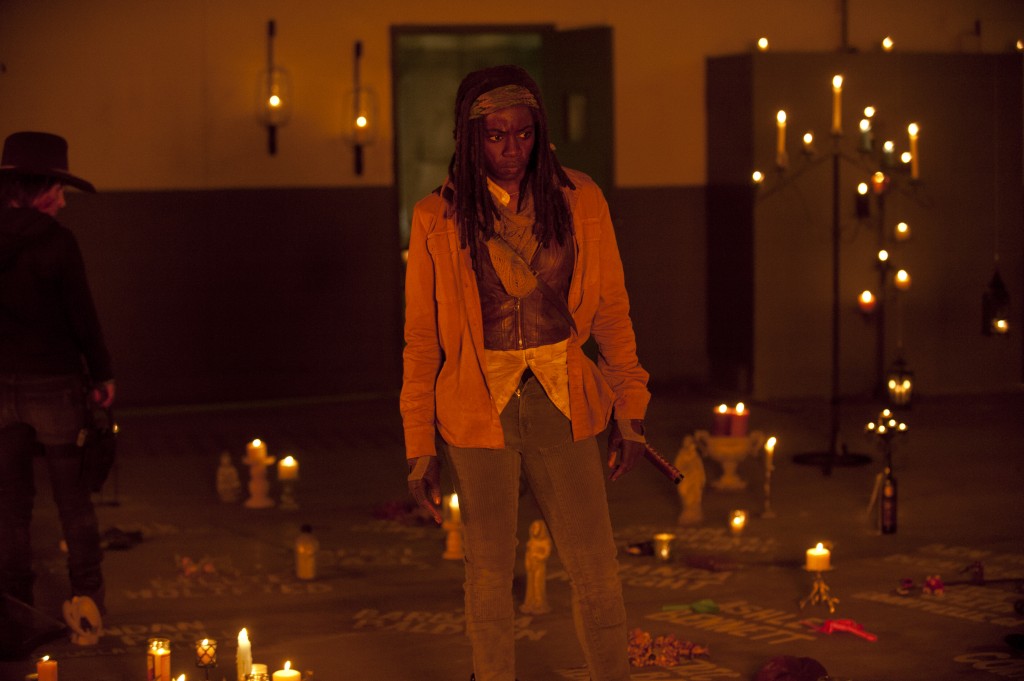 Michonne faced the same struggle after her son’s death. She mutilated her boyfriend and friend after they were turned walker (while stoned, failing to protect young Andre) and lost herself amongst the walker herds until she stumbled across Andrea.

Admitting how far off the reservation she’d gone wasn’t easy, but Michonne wanted to drive home the quality and kind-hearted people Carl had been surrounded by, citing that Andrea, Rick, and the others saved her. They could save Carl as well, even if only through remembering their strength.

Too bad they weren’t there the night Joe and his gang attacked.

To make it short, sweet, and not rehash possible abuse triggers . . . Joe’s group deserved their brutal deaths. They thought they could be a law unto themselves, ignoring the basic morals that’d guided humanity up until the walkers arrived. They were wrong. So, so wrong. There are horrors only moderately acceptable in order to survive. What these guys did went way beyond that. If Daryl hadn’t been moping over Beth’s kidnapping, he would’ve seen it and possibly handled things long before they attacked Rick, Michonne, and Carl. He didn’t. That guilt will sit on his shoulders for a long time. Rick, on the other hand, has no qualms about what they did to Joe’s group. He did what he had to do. Calm, practical Rick has returned at last.

And he’s got a taste for blood. Literally. The guy tore another man’s throat out with his teeth.

At last, the majority of the prison group finds their way to Terminus. The place isn’t half bad—clean, nice gardens, loads of flowers, friendly faces . . . oh and a cage full of butchered human remains. Wait, what? We’re not given the full story about the folks running Terminus, but one can draw their own conclusion—they’ve found the secret to a sustainable food source with little to no effort, or water, needed. They don’t kill Rick and company after the group reacts to finding items they know belong to Maggie and Glenn. Instead Gareth, the man they first encounter at Terminus, and his goons herd the group through the maze of buildings with well-placed gunshots. Wasting ammo much? They must not need to pick off walkers with the way they’ve set up the compound. Or they’ve gotten really good at luring in well-supplied suckers.

So the bad news is, Rick and his crew are held captive in a train car, surrounded by possible cannibals. The upside? They’ve been reunited with Glenn, Maggie, Bob, and Sasha. Sgt. Ford and his group are alive as well. With that many people at his disposal, there’s no doubt Rick will get them out of this mess. You know, once season five airs in the fall.

Tell us your favorite season four moments in the comments below.