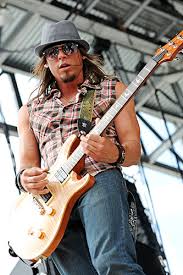 Our previous Commander Monday field reports have centered around actors, directors, producers and others closely involved in the film and television industry.  As we continue to delve deeper into the ZSC Special Forces Unit, we will uncover those with an even wider range of talents and unique abilities. This week the spotlight falls upon a different stage as we take a look at our next Special Forces Brigade member, musician and songwriter Paul Phillips.

While it’s true that Paul’s experience with actual (un)living, (not)breathing zombies may seem somewhat limited,  he has faced a shambling horde of an entirely different sort, made up of adoring fans and admirers from one rock & roll venue to the next. His extensive traveling experiences alone have no doubt taught him that sometimes the best way to survive is to keep moving, with one eye on the horizon up ahead, and the other to the road behind.

Paul Philips hails from Brunswick, Georgia and first began plucking at strings from an early age. He has admitted to taking a few lessons but is primarily self-taught, taking inspiration from his father’s musical background as well as influencing bands such as Guns N’ Roses, Metallica, Pantera, Nirvana, and Alice in Chains.  Paul’s travels took him to Florida and eventually further West.  In 1999 he landed in Los Angeles, California, which eventually led him to join forces with the alternative rock band Puddle of Mudd .  Their first album, Come Clean, was released in 2001 and has gone triple platinum while selling nearly 4 million copies to date.  Paul also toured briefly with the band Operator, releasing one album before returning to Puddle of Mudd.  In 2011, Paul and Puddle of Mudd parted ways once more as he decided a much-needed break from the road was in order.

Paul is currently operating out of Jacksonville, Florida. He recently completed work on the upcoming film Nitro Circus 3D, for which he was offered an opportunity to compose the original music score in collaboration with former Puddle of Mudd bandmate Damien Starkey. he has also been involved in The Fallout Collective and Chiller Channel’s Real Fear.

We look forward to seeing more from our own resident rock star, and have nothing but confidence that he will continue down the road to success wherever it may lead…