We’re still trucking along with BBC’s “In the Flesh” here in the ZSC command center. By “we,” I mean I am still watching. Everyone else is busy cleaning weapons and ignoring my requests for show time snacks. Would it hurt them to take a little time to bring in a leg of someone delicious? Really, sometimes I feel trapped in this gig. What’ve the folks in Roarton been up to during the series break? Nothing good.

Kieren Walker, in the now seemingly PDS-friendly world of Roarton, is keeping his head down, working soul destroying shifts in the Legion pub and squirrelling money into his ‘escape fund’. The only problem is that he can’t escape himself.

In the wider world, tensions are re-igniting. The radical pro-living party, Victus, is whipping up hatred and the Undead Liberation Army is retaliating violently. When Victus MP Maxine Martin enters Roarton, Kieren is dismayed, sensing that danger is encroaching. And when Vicar Oddie violently clashes with her, it seems Kieren’s instincts are right.

Kieren is also overjoyed by the return of his BDFF (best dead friend forever), Amy Dyer, though his delight is cut short by a tense encounter with Amy’s opinionated beau, ULA member Simon. When Amy and Simon reveal the prejudice still bubbling under the surface in Roarton, Kieren knows he needs to leave the village immediately.

The episode opened with a supposed ULA attack on a busload of innocent bystanders—including the man who killed Bill Macy during the first series finale and his young son. This is only the second time they’ve shown the effects of the Blue Oblivion drug, and it doesn’t look like a good time for anyone involved. Blue Oblivion negates the effects of daily government mandated Neurotripteline treatments. PDS sufferers must use the treatments in order to pass from the rehab facilities back into the world. Without, they’re considered rabid and put down or held in rehab and forced to receive treatment. The legalities around PDS abuse isn’t clear. How many rights do they retain after release from rehab? It’s clear they are capable of finding jobs, as Kieren has once the village calmed down and accepted the returned citizens. They even disbanded the HVF and declared the village a weapons-free zone. To protect themselves or their PDS citizens? Who knows? It’s just a good thing the guns are gone, some of the former HVF “heroes” can’t let go of the past and are itching to stir up trouble everywhere they go. Dead guys can land jobs, but these HVF members can’t be bothered to try, blaming Kieren and his kind for their unemployed status. Not their bad attitudes, lack of hygiene, and lack of motivation to get off their backsides. 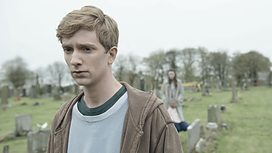 Despite the tension rife within almost every character interaction, the tone for the second series is, so far, much lighter. Even the color pallets are brighter. Except Kieren. He’s still a blob of drab compared to Amy’s vibrancy. Part of it may well be that he wants to blend in as much as possible. Fall into the background, work, earn money, and get gone before people realize he’s still there. Still the loner. And most importantly, still the boy who killed himself and rose from the dead. How often each day does Kieren curse his family for burying him instead of cremating him, as he’d requested? His parents are coping. Slowly. Sue fell back to her role of, “don’t rock the boat,” “everything is normal.” Steve’s adjustment period is taking much longer. He’s at the over-sharing stage of talk therapy. Anything and everything bothering him comes out his mouth. Unfortunately, it’s usually something that pains Kieren or embarrasses him. Jem, unlike the others, is having the hardest time moving on. She’s back in school. A loner now, like her brother. Worse is the PTSD she won’t talk about with anyone, but it’s begun to affect her life day and night.

Maxine Martin is a new/old face in Roarton, with a completely unknown agenda. She’s supposedly there on official business, but there’s glimmers of something under the surface of what she’s saying to the Vicar and others in the village. She’s hunting for something. Or someone. And her fixation on the PDS sufferers in town, especially Kieren, is unsettling. Could she be connected to Lisa, the girl Kieren ate before Jem found him and sent him to the rehab facility? Is she searching for a loved one who was buried in Roarton, hoping they rose and simply weren’t found or reported? We have no clue. It is clear, though, that she’ll do whatever necessary to obtain information and keep her cards close to her chest about her true intentions. Just ask the Vicar. Oh, wait . . . . That ship may have sailed.

So far, this series of “In the Flesh” is much more complex than the last. Can’t wait to see how it unfolds over the next five episodes.