We’re nearly finished with the second series of “In the Flesh.” There’s only one more episode after this and the fate of the show for a third series has yet to be determined. We’re not saying goodbye to the citizens in Roarton just yet, so let’s see what havoc they’ve wreaked this time around.

From BBC:
Kieren finds the strength to shed his contact lenses and cover-up mousse in public for the first time. However, he’s wrongly accused of freeing the rabids at the GP surgery and hauled in front of the increasingly tyrannical parish council. The council place Kieren under house arrest, threatening to send him back to the Norfolk treatment centre if he doesn’t confess. Disappointed by his parents’ reaction, Kieren seeks out Simon and is floored to discover he has disappeared.

Meanwhile, we follow Simon to the city. We flashback to his horrific experiences in and outside the treatment centre, learning how he was radicalized and became the Undead Prophet’s final and most beloved disciple. When the Undead Prophet tells Simon he must sacrifice Kieren to instigate the Second Rising, his faith is rocked for the first time. However, he returns to Roarton grimly resolved to carry out his mission.
At last we’re given a glimpse at what makes Simon tick. The main focus of the episode, aside from what’s going on with Kieren, was the mysterious Simon’s backstory. He’s tucked away in a hotel room—which seems out of place in Roarton, given the scope we’ve seen of the village—to meet with another ULA member. His fellow disciple delivers a DVD and a leather-wrapped package full of crude weapons. The message? Kill the First Risen. The weight of his task triggers a psychotic episode, slamming Simon back to his first memories after the Rising. A cheesy way to get a character’s backstory, true. But it does deliver vital information. For instance, Simon was the first rabid PDS sufferer to have a positive reaction to the experimental drugs that’d eventually turn into Neurotripteline. He volunteered, with some coercion from scientists, to remain a guinea pig for their continued drug testing. 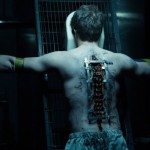 Simon was tortured in the name of science, even after he regained enough of his mental factions to realize he wasn’t happy with what they did to him.

Eventually he convinced them to let him go. But what damage did they do during testing? He seemed to suffer several hallucinations, where the first idea of the Undead Prophet occurred to him. Was it an outside source messing with his already clouded mind or an internal manifestation of Simon’s desire to liberate his kind? Being released from the drug tests and the rehab facility didn’t mean the end of Simon’s mental anguish. We find out, through a tense encounter with his father, that Simon murdered his mother during the Rising. The guilt eats at him, even after his father seemingly forgives him. That lasted for about six hours.

In the middle of the night Simon’s father booted him from their flat with nothing but a bag of clothes and whatever money is in his pockets. Adrift, Simon reached out to the only person who’d tried to help him—the mysterious voice he’d heard during his maybe-hallucinations and snuck a phone number into his belongings before his release. The ULA and their masked Undead Prophet gave Simon a family, a home, and a purpose in life. At last we understand why he’s so committed to them, despite his growing feelings for Kieren. But is his loyalty greater than his love?

While Simon struggles with his past, Kieren is very much involved in the present dangers for PDS sufferers. At home, he finally decides to embrace his true nature and goes without the makeup and contacts he’s hidden behind since returning to Roarton. This does nothing to soothe his parent’s rattled nerves after Kieren confessed that he remembers killing people before his treatment. They can’t bury their heads in the sand anymore, lie to themselves and say their son is different from the Rabids. On the heels of their argument, Kieren is dragged from his house—blamed for the clinic break-in and resulting Rabid attack, despite a complete lack of evidence. Point-blank, the village council tells him to confess to the crime or he’ll be taken back to the rehab facility with no promises he’ll ever see freedom again.

He’s given time to think about it and put on house arrest. The family tells him to sign the confession. What could it hurt? Why buck against the system? Surely the council knows what’s best for Roarton. As this second argument escalates, Steve expresses his annoyance with Kieren. Anytime his son fancies a new boy, the trouble starts. It happened with Rick Macy, and the problems are doubled with Simon’s influence. Maybe sending him back to the rehab facility would “fix” what’s wrong with their son. All Kieren can say is, “This is who I am.” Which applies equally to his sexuality and acceptance of his condition as a PDS sufferer.

Amy’s strange reaction to the Neurotripteline continues to plague her. She’s convinced this is the end and embraces the notion with one last day of fun with Phillip at her side. They take in a game of crazy golf, which is over too soon for her tastes. In a quick run-in with Kieren, Amy tells him she knows about his maybe-relationship with Simon and gives her blessing. She’s washing clean the slate. But why? We find out toward the end of the episode when she invites Phillip to an impromptu camping trip in the rain and asks him to kill her. Despite her bravado about the time before rehab, Amy is terrified to turn rabid again. She’s lived enough in the months since gaining her freedom to know turning rabid would cost everyone she’s grown to love. What if she hurt Phillip or her BDFF, Kieren? Her life has been about finding happiness. But lately, she can’t feel anything. It’s making her miserable. Something happens, though, just as Phillip is about to go through with her wish to end it all. Amy feels the rain on her face. What does this mean? Has she evolved to another level of PDS that doesn’t require drug treatments? Are the tweaked drug doses finally regulating her system? There’s so much yet to learn about their condition.

The next episode will be our last with Kieren and the folks in Roarton—for a while or for good is yet to be seen. I, for one, have thoroughly enjoyed this look at life through the undead’s eyes. It’s about time our kind was fairly represented on television.