It’s been a while since we caught up with the undead trying to make a life in politically backwards Roarton. How successful has the Give Back Scheme been? What did the kiss between Kieren and Simon mean for the future and their mutual friend Amy? Episode four didn’t answer a lot of the questions burning a hole in my slowly rotting brain, but pushed up the stakes leading to the final episodes in series two.

Kieren is conflicted about seeing Simon behind Amy’s back and frustrated by his cult leader persona around the adoring Undead of Roarton. However, Simon proves how much he cares by stepping into Kieren’s world and having Sunday lunch at the Walkers’. Unfortunately, Amy witnesses the loved-up pair en route to Kieren’s house and is crushed by their betrayal. 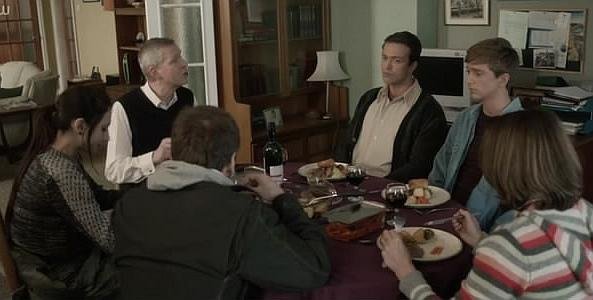 After a positive start, the Sunday lunch descends into chaos. A tipsy and trouble-making Jem and Gary descend on the meal, provoking Kieren into a confession which sends shockwaves around the family – and astounds Simon.

Philip can’t reconcile himself with Maxine’s questionable politics and the two go head to head. Seeing Philip as a thorn in her side, Maxine orchestrates his downfall and is delighted when his Undead perversion is publicly revealed. Philip’s political aspirations come tumbling down around him, but a silver lining is provided by an unexpected romantic encounter.

Maxine, with help from the villagers who feel the need to persecute anyone not sharing their warped morals, go on a seek-and-destroy mission. Any PDS person not complying with the bizarre laws now governing the undead will be brought to justice—or their idea of it. Which ranges from public humiliation to murder. Their mission isn’t limited to PDS persons, either. Maxine uses her office to bully the mother of supposedly missing Henry Lonsdale into silence. She employs similar tactics to blackmail Phillip Wilson—village council member who is hopelessly in love with Amy and has been using PDS prostitutes to live out his girlfriend fantasies about his one-time lover. He had a solid plan, sneak in, get some cuddle time, and sneak back out. Too bad the old lady across the street is tech-savvy and recorded his comings and goings. Maxine gets her paws on the tape. But Phillip’s initial shame of being found out is overcome by his sense of what’s right when he’s ordered to perpetuate the lies Maxine cooked for Mrs. Lonsdale. He outs himself as a PDS-lover and brothel regular during the staged protest to undermine Maxine’s control and delivers a stirring speech outing the villagers’ hypocrisy. None of them are perfect, so who are they to judge how others find employment and comfort. Unfortunately, they’re all so comfortable in their hate, no one listens. Except Amy.

The mysterious side-effects from the Neurotripteline plaguing Amy aren’t getting better. She’s reflexively doing human things like making herself breakfast. Worse, though, is her memory loss and continuing nose bleeds. All of which she hides from Kieren and Simon. With her rekindled friendship with Phillip, can she find someone to confess her problems to? Phillip’s mother knows, but there’s only so much she can do to help. Amy’s reaction to the drug is unique, or simply not advertised by the drug makers to cover their collective backside.

One thing to be said about this show, it likes to push the limits. How many paranormal shows have a non-stereotypical gay main character, let alone a character who doesn’t instantly fall in bed with their main love interest seconds after their first kiss? Kieren, despite being attracted to Simon, is still wary of everything the guy says and does. He doesn’t completely agree with Simon’s politics and calls him out on the cult-like activity he perpetuates on behalf of the ULA. If Kieren were a woman, she’d giggle, flip her hair, and forgive her man his many sins after the kiss they shared at the end of episode three. Instead Simon has to work for Kieren’s trust, going so far as to apply the required makeup and contacts before they go to lunch with the Walkers.

Steve Walker has his head in the sand again. So much for the progress he’d made since the end of series one. He’s convinced the Give Back Scheme will be good for PDS persons. Considers it a work program that’ll give his son skills to use once he’s done his Give Back time to get a real job. Kieren had a job. Steve argues that it’s a good start. Kieren replies with, “. . . it’s not a start if it doesn’t go anywhere. It’s just showing up for that day’s humiliation.” Kieren’s pub job was nothing like what the council force him to do now, which includes ridiculous classes where PDS sufferers are taught to say, “Sorry I caused your anxiety . . .” and various other self-blaming phrases to use with the living. 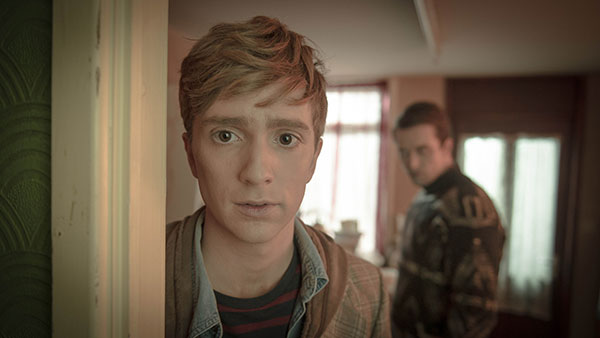 The big revelation of the episode came during the Walker family lunch. Jem drags her patrol mate, and maybe-boyfriend, Gary along, putting two former HVF soldiers and two PDS sufferers at the same dining table. Kieren’s parents are willfully oblivious to the tension. Until Gary decides to share a gruesome and insensitive war story. Kieren retaliates, telling his rising story for the first time. Simon, who’d done his best to sit quietly and suffer through the meal in hopes of getting Brownie points, perks up and grills Kieren about his rising. By the end of the meal, Simon is convinced Kieren is indeed the First Risen.

What does this mean for Kieren? It’s unclear. But with two episodes left in series two, things are about to hit the fan.