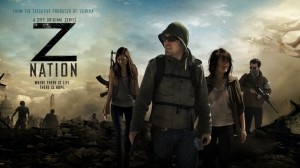 Z Nation starts three years after the zombie virus has gutted the country, a team of everyday heroes must transport the only known survivor of the plague from New York to California, where the last functioning viral lab waits for his blood. Although the antibodies he carries are the world’s last, best hope for a vaccine, he hides a dark secret that threatens them all. With humankind’s survival at stake, the ragtag band embarks on a journey of survival across three thousand miles of rusted-out post-apocalyptic America.

Does that plot sound vaguely familiar? Some guy is tasked with dragging another guy across the country who may just have a cure for the zombie virus and therefore heralds the end of the nightmare these people have lived in for the last three years. The answer is on the tip of my tongue . . . and now my tongue is on the ground. Rotten luck, that. 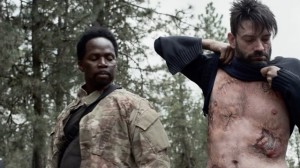 Don’t plan to go into the 13-episode season and expect brilliance. Remember, the people responsible for this show gave us Sharknado and its sequel, on top of many other poorly executed horror movies. Straight off the bat, this show is all cheese. The typical “news clip” introduction laying down the essentials—government is in shambles after three years fighting the zombie infestation and there’s still no cure. Computer-generated wounds on the zombies that look like a kid with Movie Maker painted them in while bingeing on Hot Cheetos. Horrible dialog that’s spelling out everything we’re already seeing on the screen. Beyond basic practical zombie makeup, save for one or two rather neat effects—which were computer graphics.

We jump into the story head-first. No time to know any of the characters. No time to develop a bond with them so the zombie attack in the first five minutes has any impact. It’s an attack just to film an attack and push the very thin plot forward. Once we’re sure Murphy (Keith Allan), the unwilling guinea pig, and Lt. Hammond (Harold Perrineau) are out of the overrun prison, there’s a time jump. Moving forward a year, suddenly we’re at what feels like a funeral. Filled with characters we haven’t met yet. And, oh yeah, the 64 year old woman being mourned isn’t dead yet. Society has established what’s called “the 8th”, an act that boils down to assisted suicide for terminally ill people or the elderly who fear they’ll die soon. It is supposed to prevent the ill from dying and turning zombie inside the ramshackle towns that have popped up. 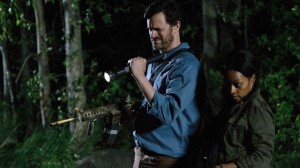 This is how we meet Roberta Warren (Kellita Smith), our lead female character, as she’s shooting a kindly old woman in the head. Shortly after, we meet her partner in leading the people in this town, Charles Garnett (Tom Everett Scott). And with him come the bad pennies, Murphy and Hammond—who’ve somehow stumbled across the town while canoeing down the river on their way to a rendezvous for Operation Bitemark. Yes, that’s right. The most obvious name for the operation is, indeed, what the NSA chose before most of their command structure died in a random plane accident, leaving behind P.F.C. Simon Cruller (DJ Qualls) a.k.a. Citizen Z. It’s like the writer’s didn’t even try to hide how ridiculous this show will be.

Hammond commandeers the town’s truck, along with Warren and Garnett. Before they make it ten minutes out of town, a ton of zombies float down the river and attack the town. There’s no survivors, save a handful of folks—Doc, Mack, and Addy—who weren’t in the town’s walls during the attack. Everyone is now along for the ride, because, why not? Right? Sure. You guys know how this will go . . . they arrive at the designated spot to find it in ruins. The NSA men are dead. Civilian zombies litter the ground.

Then there’s the baby.

A baby which Warren cannot fathom handling. Why? Because she’s written to be the cold, hard-as-nails female zombie slayer. Obviously that means she has not one maternal bone in her body. It’s either guns or diapers—never both. The world would come to an end. Oh, wait. Too late. 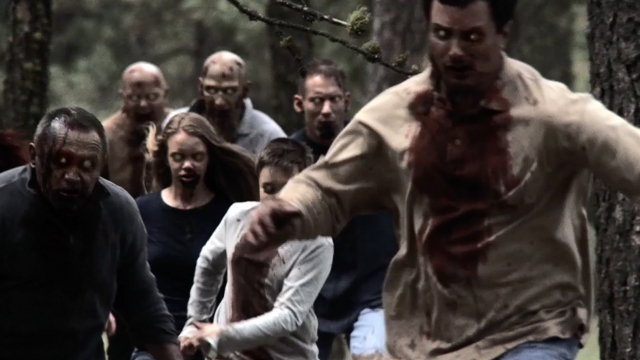 You guys get the gist. Z Nation will end up being a 13 episode series of bad dialog, poor character development, and maybe, just maybe, a couple decent horror moments—similar to the prisoner-turned-zombie during the opening scene. Like The Asylum’s movies, your best bet to survive this show is to grab a couple friends to torture and watch/heckle as a group. Tell them to bring drinks. You will need it.