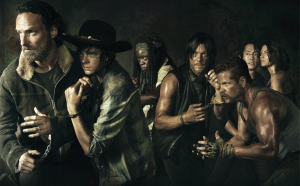 A little forewarning for the second episode of season five—don’t eat anything when you watch. Or rewatch. At no point in your life will it be okay to consume much beyond water while watching . . . and even that’s questionable depending on the strength of your stomach.

For the first time in too long—possibly since before Hershel’s murder—we witness a survivor group who are somewhat happy. It may be mostly relief. Giddiness from finding each other once again and surviving escape from Terminus with no casualties on their part. Rick smiles and takes time with his children, something he hasn’t been able to do since the prison attack. Even then, he was plagued by Lori’s ghost and could not fully bond with Judith. Everyone has banded together to take care of the baby. 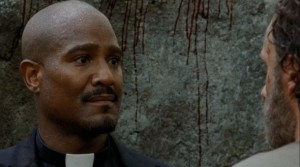 Judith, along with Bob and Glenn, became the heart and soul of the group. Anyone needing a mental time-out takes a turn watching the baby. Tyreese in particular has done a lot of mental healing since his time taking care of Judith. His world simplified to one focus—protect her and provide for her, no matter what dangers lurk around the corner. Because of that focus, he’s ready to forget that Carol killed his girlfriend and move on. He can kill again, without feeling a strangling sense of moral wrongness. Bob and Glenn, in their roles as heart and conscious, focus on Rick and keeping him grounded despite his overwhelming need for revenge. Even though Rick is smiling and reunited with his family, there’s a darkness in his eyes that won’t go away. The pain he’s gone through has forever changed him. Even if Eugene’s scheme to infect the walkers with a super virus that’ll kill them off works, Rick will never be the same. He will need people like Glenn and Bob to thump him over the head and remind him he has two children relying on him to stay grounded and in control of his anger.

Unfortunately, Bob may not stick around long enough to help. We’ll get to that later.

This episode introduced Gabriel Stokes—a priest with a strange sense of humor (and awful comedic timing) and a secret which may or may not come back to bite the entire group in the backside. Gabriel doesn’t kill, not even the walkers who threaten his life. He’s been isolated in his church since the undead outbreak reached his neck of the woods. Luckily for Rick and company, the church is far enough out of the way to have little walker foot traffic. They hole up in Gabriel’s safe haven to take a breather and have a nice wind-down session reminiscent of the party down in the CDC’s basement back in season one. Let’s hope the church isn’t rigged to blow up. 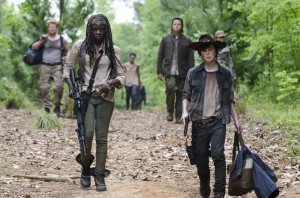 The safety the church offers is an illusion. Rick, Carl, Daryl, and Michonne all sense something isn’t quite right. For days they’ve thought someone may be tracking their movements. Carl found evidence of an attempted break-in at the church, but couldn’t tell if the knife marks on the windows or the threat, You’ll burn for this, were fresh. We know that Morgan isn’t far behind the group, and he was a tad loony-pants the last time Rick saw him, but is he the threat?

Nope. It is far, far worse.

Poor Bob. He’s finally found a groove after the apocalypse—a solid relationship with Sasha, good standing within the survivor group, sobriety, a solid plan to help Abraham and Eugene reach the epidemic center in D.C., and a sense of relief so great he can’t help but weep. The latter proves his undoing. When Bob takes a time-out from the party, someone sneaks up and clubs him over the head. Next thing we know, it’s Bob-aque time. Hold the sauce. He’s still alive, but for how long? Gareth seems like a patient man, despite his disgusting diet choices. The group who survived the Terminus attack is small. How much can they consume before Rick realizes they’re a man down? Do cannibals diet? Guess we’ll find out next week. Cross your fingers and hope Bob makes it out only missing one limb.