No bones about it, this season has been rough to watch. The emotions are raw, unfiltered. Every walker confrontation is filmed up close and personal, drawing viewers in. Tension between Rick’s group and the Terminus survivors is so thick, an elephant could tap dance on it. Three episodes in and we’re already terrified to get too attached to any character. For good reasons, as we’ll see in a little bit.

Spoiler warning! This is not a joke. Below is a whole slew of episode spoilers.

The opening scene with Gareth and Bob is flat-out freaky. Gareth has snapped the last sanity string holding up his humanity. He’s no better and no worse than the undead—eating to survive, no matter the source. There’s no hope of normalcy left for the Terminus group. Gareth understands all too well that they can’t go back to who/what they were before. All they can do is move forward, make allies. Those who join will aid them in their hunting needs. The people who refuse become dinner. For Gareth, life has become all too simple and clean.

Unfortunately his last meal before his talk with Bob wasn’t as clean as he’d hoped.

Now it’s clear why Bob had been outside the church weeping—he was bitten in the food bank’s basement, just when his life was becoming settled again. Unfortunate for him then, but a boon when he realizes he’s been turned into dinner for Gareth and company. Despite being ambushed and injured, unable to defend himself, Bob still fought against the Terminus crew. His fight didn’t end when they dumped him on the church’s front yard. Bob’s physical fight ended when his leg was devoured. His mission from then on out was to keep his friends and loved ones going until his time came to join Hershel, Andrea, Dale, T-Dog, and numerous others who had become part of the steel backbone keeping Rick’s haggard group on their feet. “Nightmares shouldn’t change who you are.” Bob slipped, fell into alcoholism when things got rough, but dug himself out—with a little help. Since then he’d been fully onboard, helping Rick keep everything and everyone together. His centered, playful way of approaching life will be missed. 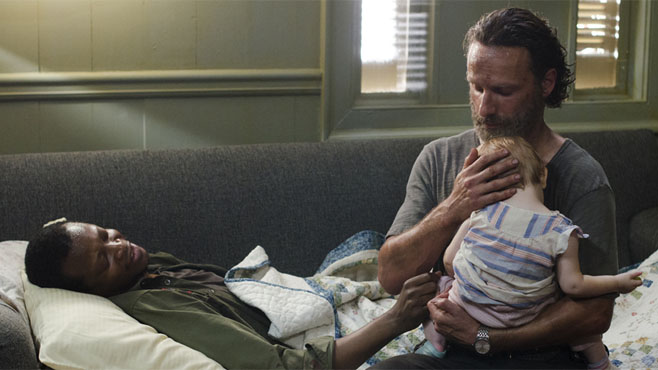 Gabriel takes the brunt of everyone’s anger after they realize, not only has Bob vanished, but so has Carol and Daryl. After all the pressure he’s put under, he snaps and tells his tale. On the night the undead reached the area, he locked the church’s door—same as he did every night. Only, when his congregation came knocking, Gabriel hid and left them to the walkers drawn by their cries for sanctuary and damnation of Gabriel’s soul. He truly feels he’s going to hell for taking care of number one instead of opening the church to dozens of people he couldn’t possibly home and provide food for. After his breakdown in front of Rick, Gabriel falls into himself until the aftermath of a gruesome confrontation. Even then, he’s given up on himself and can’t muster enough to care and argue with Maggie after his decree, “This is the Lord’s house,” and she replies, “No. It’s just four walls and a roof.”

The tension in Rick’s group hits a high note in this episode. Abraham is done waiting and scrounging for supplies. He wants to get on the road to D.C. and finish his mission to deliver Eugene safely to the epidemic center. He sees Bob’s bitten condition as a threat. The second Bob was out of earshot, Abraham orders his people to pack and move out. Rick attempts to talk reason, and fails. Glenn, who spent a good chunk of time fighting alongside Abraham before the main group reunited, finally steps in and trades his and Maggie’s assistance in the mission for twelve hours of Abraham’s time to settle things at the church. What does Eugene think about all this? He wants to stay with Rick. Is it the quality of leadership? Rick’s ruthlessness that’s seen them relatively safe thus far? Or is he hiding a deeper truth than the one he’s sold Abraham on? I’m still inclined to believe Eugene is lying to Abraham for the protection and there’s no miraculous walker-killing virus.

We can’t wrap this up without going over one heck of a showdown between Rick’s group and the Terminus survivors at the church. What looks like an ambush on the weaker members of the group ends up being wholesale slaughter for Gareth and company—like fish in a barrel, and Rick dropped in a stick of dynamite. Gareth doesn’t bother to hide his admiration of the ruthlessness. Rick doesn’t bother to hide it, either, as he hacks Gareth apart with a machete. The rest of the Terminus survivors are dispatched in similarly brutal ways. The silver lining? Michonne has her sword back. The downside? This take-no-prisoners attitude makes some of the group uneasy. If Rick had just shot Gareth and his people, it would have been easier to accept the quick, clean death. Hacking and bludgeoning someone to death takes time. It is a drawn out, painful, and messy demise. Messy not just in the blood and brains spread everywhere, but the emotions such brutality dredges up. 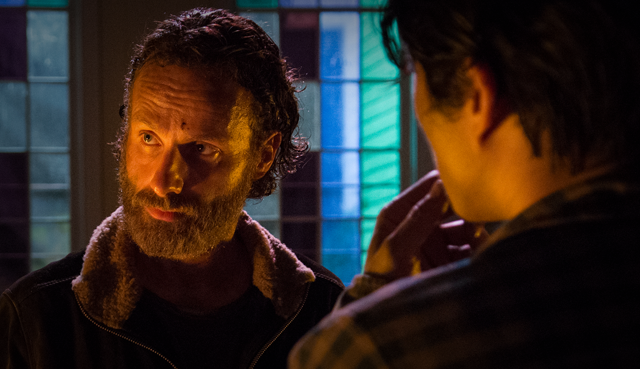 The episode ended on a cliffhanger of sorts. Daryl, who missed out on all the gory fun, creeps out of the woods. Without Carol by his side. And talks to someone who we can’t see with obvious distress on his face. There may have been ample yelling at the screen when we realized that was how they planned to leave things until next week. You can’t do this to us, guys! Where is Carol?