We’re two episodes out from the mid-season finale. Which leaves the show not a lot of time to tighten ranks and leave us with one of their unforgettable mid-season finale episodes. Going off the last three episodes, the energy the show needs to build in order to give fans what they’ve looked forward to is a tall order. Since Beth’s solo episode, the story has been dragging behind like a walker’s partially severed foot.

Whoa! Below are a bunch of episode spoilers. Turn back if you haven’t watched, yet.

The main problem with the show right now is too many characters and the need for intensive character development in order to make potential plot progress happen in a believable manner. What that means for the viewers is smaller cast sizes for each episode to give certain people their time to shine. We’ve done this with Beth, Daryl, and now Carol. 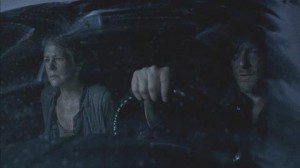 Throughout this episode, we catch snatches of what happened to Carol after Rick asked her to leave the prison, and a couple from before. Do we need more Carol backstory? Not really. She’s grown the most as a character, aside from Carl. Most of what’s changed Carol was right there on the screen. What we didn’t witness first-had still resonates in the way Melissa McBride carries herself in this role. Tossing in two-second flashbacks every time the show comes back from commercial is unnecessary. Did they forget that Carol is one of the main characters? We know her pretty well, even while she was gone. Not one single fan I spoke to during the time Carol wasn’t on screen said she was gone for good. They all knew she’d come back to help Rick and company.

Our only other lead in this episode was Daryl— a character who’s also shown significant emotional growth, especially over the time since his brother’s death. But he’s also someone the fans know well. They understand Daryl on a level bordering on psychic. Norman Reedus paints every emotion on his character’s face. There’s a lot of mystery about Daryl, but not when it comes to where his head is at. Yes, it was nice to have an episode where Carol and Daryl play catch up with each other, but there has to be a plot to go with it.

We’ve been chasing Beth for far too long. The entire episode cannot be a game of hide-and-go-seek. This story line drags the energy for the show down to a level where it’s hard to focus on what’s going on because everything has reached predictable levels. Daryl won’t give up until he finds Beth. Carol won’t let him go off on his own. They’re in a huge city. There’s magically a trail of breadcrumbs for them to find where Beth is hidden. 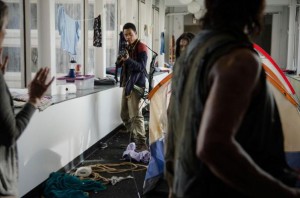 Oh yeah, and Noah. Noah hasn’t made it very far—convenient for our heroes, who haven’t had a very good day. And Noah makes it worse by robbing them. Only he still doesn’t make it far, even after arming himself. Why would anyone who knows the kind of depravity living amongst the hospital populace stay within easy reach? He has most of the means to get away. Find a car and he’d be free to make pit stops to grab food and water. Noah stays out of fear, yes, but he was so gun-ho get away with Beth. Did he stay for her and not want to admit it? For an episode based solely on character development, Noah and his motivations were left at the wayside in favor of information we already knew about two popular characters.

Doesn’t bode well for viewer expectations down the line.