We’re one episode away from the mid-season finale. So far the plot has crept toward an outcome completely hidden to the viewers. There’s no big bad guy for the various factions within the survivor’s group to fight. The one main mission for the season was based on a lie. We’ve now got a new mission: Save Carol and Beth. But can that take us through the next two episodes and give fans what they look forward to every mid-season break?

Watch your step! There’s spoilers creeping around under here. 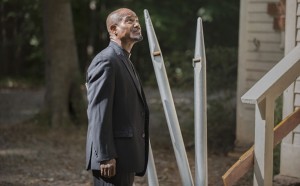 Our intrepid heroes split yet again, leaving Michonne and Carl to look after Judith and Gabriel. The Father is jumpy, touchy about the work being done to fortify the church so it’s a safer place for them to hole up. His regret over the murders done by his fellow survivors eats at him. Michonne and Carl tag team Gabriel. They stress the need to learn how to defend himself. How to move on emotionally after being forced to kill—walker or human. Gabriel saved them by allowing them to camp in his church. This is the only way they know how to repay the kindness, by teaching him how to survive after they leave if he doesn’t travel with them. The pressure from them to grow past his comfort levels forces Gabriel to do something utterly stupid. He escapes through the floor boards and under the church, injuring himself in the process. How far can a limping, pacifistic, guilt-ridden man make it? Is he running from people he sees as cold-blooded killers or from the memories of how he soiled his hands by refusing to aid his parishioners? 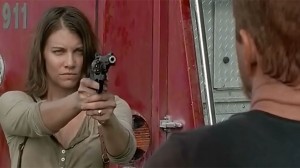 There is a new faction within the survivor crew – G.R.E.A.T.M. is the team name Tara cooked up for the group who had been escorting the liar Eugene to D.C. for his mythical walker cure. They’re not a very well-oiled machine at the moment. Abraham put himself in time-out after decking Eugene, his temper steaming hotter than the Georgia highway he’s kneeling on. Rosita attempts to talk sense into him. Fails. Fails to the point where Maggie draws her gun and forces Abraham to kneel again. Maggie is done with his hissy fits and the hiccups in their plan. She’d agreed to go to help. To give her life some purpose after losing her entire family, except Glenn. Without the mission, the entire group is lost. Tara tries to keep the peace, but can’t do anything in the face of Abraham and Maggie’s anger. Glenn eventually steps up and starts weaving a plan, using his people skills to show everyone that the fighting will get them nowhere and they can’t camp out in the middle of a highway forever. He brings them together. By the time Glenn, Rosita, and Tara make it back from a trip to find water—scoring a couple fish for dinner along the way—Eugene is awake and Abraham’s relief that he didn’t kill yet another living being sloughs the foul mood from his shoulders. They may be able to work as a cohesive unit, but where will they go if D.C. is out of the picture? 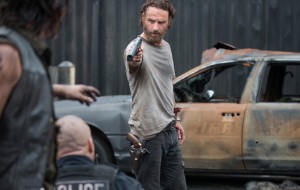 Rick’s group down in Atlanta seem like they may have a solid plan to get Beth and Carol back. Or maybe not. Tyreese has come a long way since the days when he could not and would not even do so much as kill a walker. However, the thought of barging into a secure building crawling with well-armed police makes him think twice. Not only about the casualties from the opposing side, but civilians and their own crew members. He comes up with a better plan—catch two of Dawn’s officers and force a trade, yours for ours. When Rick moves to reject the safer idea, Daryl intervenes. He’s not taking any chances retrieving the two people he’s come to care about the most because of one of Rick’s rash gotta-get-revenge ideas. The plan goes off without a hitch. Or so I’d like to say. Being what it is, things went downhill quickly as soon as backup arrived to aid the cops lured out by Noah. There’s a shoot-out and violent hide-and-go-seek scene. It ends when Daryl rips the head off a walker and bashes a guy’s head with it. There’s a sit down with the officers in custody. One man, Bob Lamson, appears to be the best bet for making the plan work. He gives Rick some solid advice . . . and then uses Sasha’s obvious emotional weakness against her. Lamson lures her off to the other side of the warehouse and rams her into a window so he can escape. So much for having a plan.

The main walkers for this episode were far different than anything we’ve seen from KNB EFX for the show before. Most of Atlanta was hit by napalm during the initial walker invasion. The unlucky folks who’d been outside the hospital for evacuation were hit in the process. After they died, they came back as animated hunks of bubble gum. Or at least that’s what they looked like with their flesh melting over the asphalt. Wouldn’t want to step in that and try to scrape it off my shoe.

Inside the hospital, things are the same as always. Jerk cops ordering their wards around, and turning that onto Dawn when they feel they aren’t getting their way. One officer orders Dawn to take Carol off the machines and stop treatment, stating it’s a waste of resources. Dawn agrees, and then turns around to use Beth to save Carol. Because any sane office of the law will ask a scared, injured girl to pretend she’s a doctor and potentially kill a woman trying to save her without proper medical training. Yup. That’s one-hundred percent believable.

The next episode if the much-awaited mid-season finale. What’s waiting for viewers? Hopefully something to punch up the energy for the remainder of the season.