Okay, so those weren’t zombies we saw him battling alongside friends and influential high school teachers in the instant-classic hit film Starship Troopers. They were bugs. Big bugs. Big fast bugs. Big, fast deadly, angry extraterrestrial badass bugs. They’re hard to kill, but you only have to do it once –  Nobody ever said “the only good zombie is a dead zombie,” not only because it’s a dumb thing to say, but because it just doesn’t have the same ring to it.  Few others understand the importance of perfecting the patented flip six three hole, and even fewer can say they have traveled as far and walked as many roads as this seasoned actor, writer and producer. 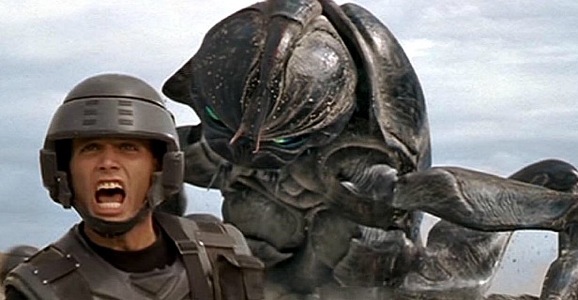 Coming from a strong military background, Casper Van Dien was raised in New Jersey, on a street named after his great-great-grandfather … you guessed it…. Van Dien Avenue.  After moving to Florida, he attended Admiral Farragut Academy where he graduated  as Operations Officer, obviously setting the stage for the future and preparing for what lies ahead. While waiting for the zombie apocalypse to begin, Casper moved to Los Angeles and landed many TV roles, including television commercials and roles in Beverly Hills 90210 and One Life to Live before stepping onto the bigger screen.

Soon afterwards, he landed the lead role in James Dean: Race with Destiny before jumping into the part that even now remains one of the most recognizable to science fiction fandom, Johnny Rico in the ultra-violent action adventure, Starship Troopers. In 2009, the Lt once again donned Johnny Rico’s uniform and jumped to the front lines in the war against child abuse, appearing in several PSAs by ChildHelp.org. Many films and television appearances later, he appeared in Tim Burton’s Sleepy Hollow, earning himself some experience in dealing with the undead. Casper also became the 20th on-screen Lord of the Jungle when he took the starring role in Warner Brothers’ Tarzan and the Lost City.  In 2008 he reprised his role as Johnny Rico in Starship Troopers 3: Marauder, and more recently he brought us Johnny Cage in  Mortal Kombat: Legacy

Coming soon: Watch for for Casper in Sharktopus vs. Mermantula…  yes, you read that correctly. And after watching the trailer below, we simply CANNOT WAIT to see it.

Look for Casper in the upcoming Star Raiders: The Adventures of Saber Raine, ISRA-88, Army Dog and Grit in 2015.