Sebastian rallies, after being buried in a shallow grave, and kills Kimber Cooper—a cheerleader too nice for her own good, killed because she wants to say a few kind words about the mystery dead guy. The others—members of a metal band, The Asshats—bolt. Kimber’s body is discovered by a hiker’s dog. Actually, Fido only brought his owner a foot. Liv panics when Ravi points out that this is likely a zombie killing. With plenty reason, too. The body count raised by her kind is reaching terrifying numbers. Eventually humans will notice.

What can humans go without? Watching Liv make a room-temperature chocolate milkshake from Kimber’s two-week old, liquefied brain. Even I got a little queasy. She should’ve warmed the brain to make hot chocolate. Gives it a buttery aftertaste.

Cheerleader brain makes Liv difficult to tolerate. She uses lazy teen-speak to coerce Kimber’s friend into giving up her location for the night of her disappearance—at rehearsal for The Asshats. Bubbly Liv is annoying. Luckily, she ditches the cheerleader brain at one point. Unfortunately, it’s so she can eat the brain belonging to Nate, one of the guys from the band who Kimber hooked up with. Liv and Clive discover Nate’s body in the band’s rehearsal space when they head over to ask about the stolen car. Before Liv gets a bite of Nate, Clive takes a taste of the pizza she put his brain on. If only Clive knew . . . .

Nate was perpetually high while alive, something Liv contracts from her lunch. She reneges on promises made to Peyton—girl chat and spin class—in favor of smoking and chasing case leads from Nate’s text history. Mostly smoking, though. During the one viable vision from her time with Nate’s brain, Liv discovers he and Cameron, another band member, argued about whether or not they should go to the cops about the hit-and-run. There’s also money involved somewhere, it pops up in this vision and in a text sent from Kimber’s phone a week after her death. Theresa, the band’s drummer, comes forward about hitting Sebastian with the stolen car. After she sits with a sketch artist to recreate Sebastian’s horrifically scarred face, Theresa is texted by Cameron to meet at a hotel and not trust anyone. She’s attacked in the hotel room. The last we see of Theresa, she’s struggling to reach the phone and call for help.

While Liv plays brain ping pong, Major prepares for war. He records a video in case he dies confronting Blain. His grand plan involves casing Meat Cute by posing as a health inspector—putting him face-to-face with Blaine. Of course Blaine smells something fishy. He hasn’t been this successful murdering people without exercising caution. There’s a few more additions to Major’s personal weapons cache, including a grenade. No amount of preparation will change the fact that Major is acting impulsively and fails to cover all his bases. Dupont gets wind of the surprise inspection and puts a name to the face which annoys Blaine. Seizing the opportunity, Dupont abducts Major and presents him to Blaine as, “The guy who knows too much.” 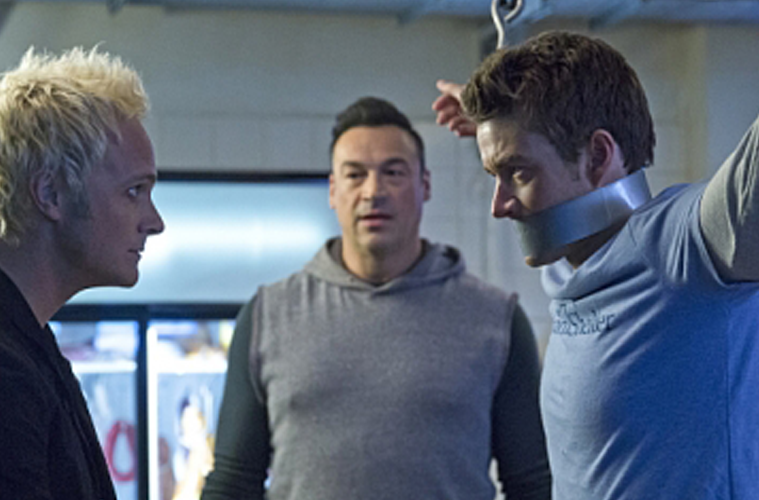 Peyton learns far too much, as well. Sebastian snaps, speeding up the inevitable meeting with Liv, the zombie detective after he’s driven to kill his aunt. He breaks into the apartment, knocking Peyton unconscious. Then decides to make dinner. Sure. Every bad guy stops for a meal when plotting his next murders, right? (Hannibal, you don’t get a say in this.) Liv and Sebastian fight. They both go full-on zombie. Liv is stabbed multiple times before gaining the upperhand and murdering Sebastian. 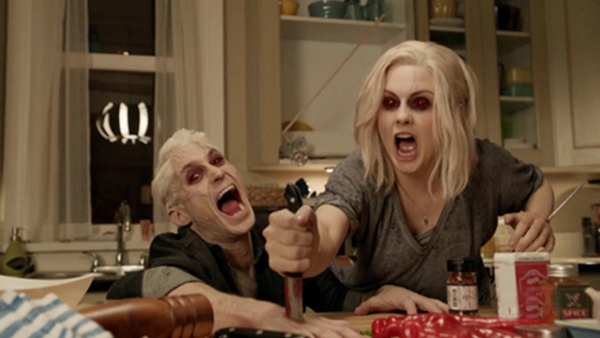 What neither notice is, Peyton regains consciousness seconds before. Liv has no option but to tell the truth—she’s not bleeding and her eyes went freaky-red because she’s a zombie. Peyton takes it about as well as expected. She runs. Doesn’t tell Liv or Ravi where she’s going. Just vanishes with the suitcases she packed for a romantic trip with Ravi. What will Peyton do with what she knows? Is she heading for the police station? How much long will the zombies fly under the radar? I’m going to say, not much longer.