Something about the zombie apocalypse makes the weirdos come out to play. For once, I’m not talking about the crew of oddballs the show follows, but the cult hanging out in Hannibal, Missouri. With a city name like that, of course there’s a group of loonies thinking the undead are actually the first wave of the rapture—the Resurrected, as they call them. Didn’t we do our time with cults, already? Cassandra’s people demonstrated well enough what can happen when a man is capable of duping the weak because he says exactly what they want to hear. While this cult takes it a lot further down the religious grey waters, it’s essentially the same type of characters all over again. Six episodes in and they’re repeating ideas.

“Just because he’s dead, doesn’t make him a hero.” Murphy calls it again. Why are they following the map of a dead man who wasn’t very pleasant to be around? Lt. Hammond made some questionable decisions during the half a blink he was in charge of the mission. Talking sense doesn’t work for Charles and Roberta. They have a starving crew to provide for. 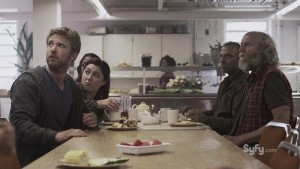 Off to the mythical resupply post named Province Town, run by Charles’ old friend, Major Williams. The place seems legitimate. They have a strict no weapons rule within the town’s fences. There’s regular patrols to keep zombies back from the compound. Everyone barters for supplies—Williams feeds the crew on his dime for their first meal. There’s not a lot of privacy, but there’s beds, electricity for four hours a day, fresh produce, and plenty of zombie-proofing.

Sounds too good to be true? It is. The cult leader, Jacob, sends three former town members back inside the fences. “. . . was just a crazy cult leader,” one tells Williams. Another says the magic words every survivor loves, “We brought food.” Within thirty minutes, they’ve snaked their way into everyone’s trust again. Not much longer after, the fun begins. The trio reveal concealed blades and kill themselves, turning into the Resurrected. How did the security staff missed the giant crosses under their shirts? The sudden Z outbreak in town puts a cramp in Roberta and Charles’ plans for alone time in one of the few private rooms. This is where the no weapon policy bites Williams in the backside. Everyone is vulnerable. Roberta and Charles fight their way to the others with heavy books. 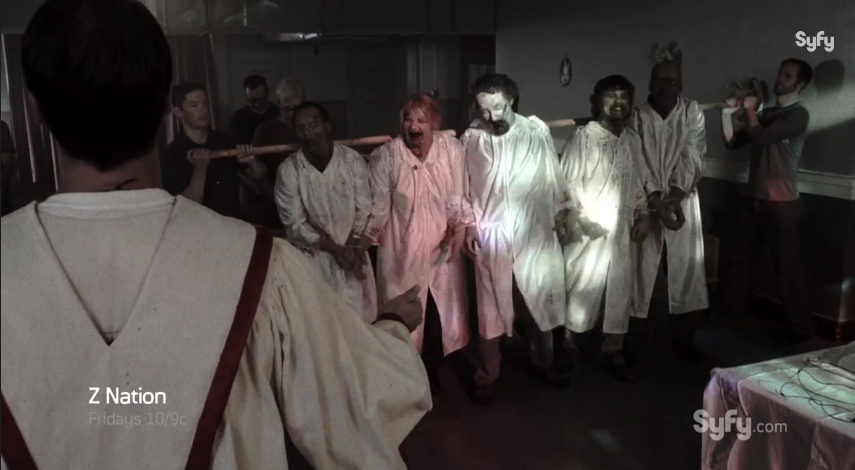 Addy mashes a zombie’s face into his brain with an egg beater. Then she freaks out. Again. For the last few episodes, something’s gnawed at the girl’s brain. First, when she and Mack find themselves alone back in Illinois, again during the tornado, and a few times during this episode. Each incident is different. There’s no set trigger for her trauma. No explanation for what’s going on, either. She’ll be just fine, then BAM, a total wreck immobilized by fear and visions of violence. If they don’t explain what’s going on soon, these random visions are going to get annoying. 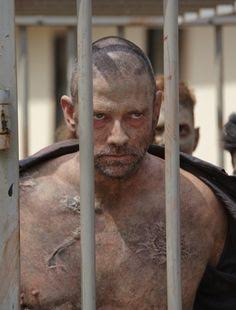 With the town overrun with undead, Jacob and his people let themselves in through the gate. Systematically, they gather the Resurrected and the living. Of the countless people living in the compound, we’re lead to believe only the crew we’re following survive. 10k and Cassandra find a spot to try to take out the cult. Williams is turned. Murphy is missing . . . until he steps forward in the zombie cage to confront Jacob on his lunacy in order to save Charles. He plays on the cult’s beliefs, exposing his bites, using the zombie’s disinterest in him to portray himself as the Resurrected Messiah. While it made a point, I wouldn’t suggest sticking your fingers in a zombie’s mouth. Ever.

Jacob doesn’t like being proven a liar. He suggests one last test for Murphy—a bullet to the heart. Knowing the risk if Murphy dies, Charles throws himself in the bullet’s path. He dies. The others drag Roberta away while Charles turns zombie. When they’re in a safe place, she forces them to stop so she can give Charles mercy. For good measure, she puts a bullet in Jacob’s heart and leaves him for the zombies running loose in the compound.
Can they make it to California without the backbone of the group? Williams warned them, mega-herds of zombies populate the plains and out west. As far as he knew, there is nothing out there for the living. Then why is this crew so determined to make a maybe-rendezvous? Murphy is slowly turning into something. There’s no telling what’ll happen in the time it takes to fight through the hordes ahead.