For the first time in nearly five years, I’m throwing the B.S. flag on TWD. This episode is beyond ridiculous. It jumps from Rick shooting Pete to the Alexandria survivors staring at a walker horde numbering in the thousands. Yeah, that’s cool and all, but what are they doing there? Why are they futzing with this many walkers? Who is this guy arguing with Rick so much about a “dry run?” Dry run of what? Turning Daryl into walker bait, apparently. Just about everything before the opening credits makes little to no sense. It doesn’t get any better.

The episode bounces constantly from the present to the past. It’s confusing. Frustrating. Made me homicidal about twenty minutes into the episode when I finally just wanted to watch the plot in chronological order instead of the convoluted and drawn out method utilized in the episode. There are several moments when it cuts from a flashback—presented in black and white to lessen viewer confusion—to Rick and crew walking through the forest for ten seconds, then back to the Same Exact Scene in the flashback it cut from. Are you confused yet? Just typing it hurts my head. What were the writers, director, and editor smoking when they cobbled this idea together? Did they shoot up Krokodil in order to feel like a walker before locking themselves in the editing room? It’s the only way to make sense from the mess they made of the plot. 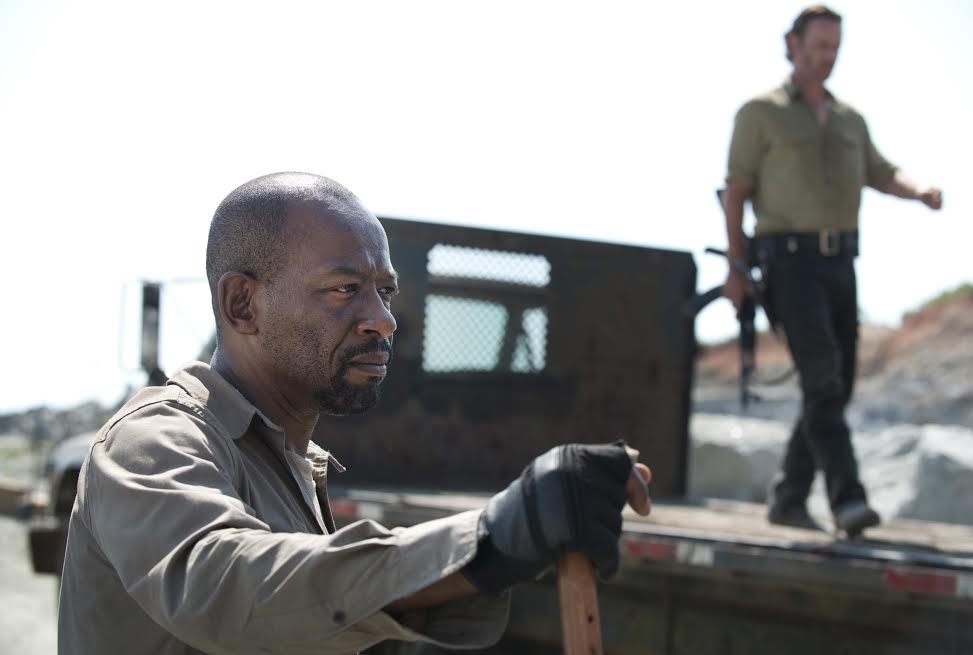 Sad thing is, the plot itself is pretty straight-forward. Let me try to sort it out and spare you the brain cramp I’m dealing with.

Deanna, kneeling in Reg’s blood, bonds with Father Gabriel for a brief moment after she realizes he was right to warn her about Rick. Abe takes Reg’s body to the cemetery to await burial. Pete’s family mourns their loss. Tara is awake and well in the clinic. Glenn and Nick stumble in fresh from their near-fatal fight. Maggie and Eugene fuss over their respective people. Tara is just happy the mullet survived. Carl is seen once in the episode, sitting on a roof with his kinda-girlfriend. Rick tells Morgan that he doesn’t taken chances. Morgan is locked in the prison room until morning after Rick collects his thoughts. They discuss the Wolves and what happened at the trucks. Daryl and Rick don’t see eye-to-eye on Daryl’s recruitment missions. Heath and his supply-fetching crew return to Alexandria. Eugene, in typical Eugene fashion, awkwardly allows them to drive through the gate. Morgan gets the penny tour of Alexandria. Father Gabriel sets to digging graves for Reg and Pete. Rick and Deanna agree—Pete will not be buried in town. Rick and Morgan take the killer’s body away to bury in a location none of the townsfolk will ever see. Ron, Pete’s eldest son, follows the men to the burial site. He ends up drawing a few walkers to their location. Rick saves the boy from falling off a cliff. He gives him a stern talk about how Ron can’t defend himself; Rick will teach him, but not right that second.

All of that was simply lead-up to discovering the thousands of walkers trapped in a quarry not too far from the town. This is how the people survived without learning how to defend themselves; most of the walkers are crammed in the quarry. A few escape, but not enough to pose a real threat. However, the semi-trucks the quarry’s former tenants put in place to defend themselves—that plan obviously didn’t work—aren’t so stable anymore. Rick sees the problem and brings it back to Deanna and the town. Heath fills in the information gaps since he already knew about the horde but didn’t consider it an issue. They must act now before one of the trucks barring the walkers falls. Carter, the new guy seen arguing with Rick in the opening scene, continues to argue with Rick. Big surprise. 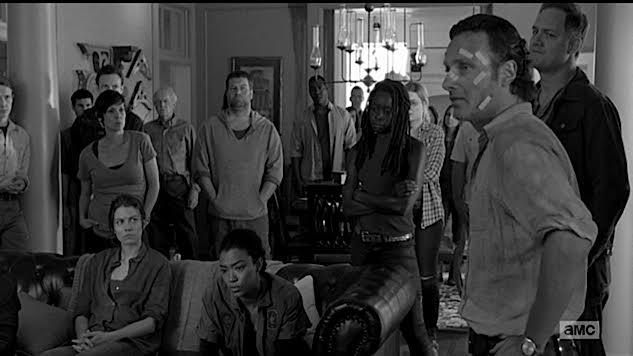 They concoct a plan to move the walkers west, away from Alexandria. More arguing from Carter. Then Deanna and Rick corner him—he’s built a wall once, why can’t he build another barricade to keep the walkers off the road leading to their front gate? Obviously Carter agrees. The nexk set of flashbacks take place as they’re building the barricade. Daryl puts his foot down; he will be going to find new townspeople after they move the walkers. Carol continues to play “scared little lady” to fit in, however Morgan sees through it. He notices the way Carol is always watching, assessing the situation and confuses her with a cop. Maggie tells Tara about Nick’s part in Noah’s death and the murder attempt on Glenn. She gives Tara the power to spread the stories, let the town decide if Nick should be banished. For now Tara will follow Maggie’s lead when it comes to Nick. Rick corners Deanna on the premise of giving condolences about Reg. She sees through it and tells him to speak his mind. He tells her he will be training everyone how to defend themselves and use guns. Right on cue, walkers discover the build site. Rick holds back his crew, telling Carter and his friends to take care of the walkers with their shovels. That lasts about five seconds until they realize there’s too many walkers. The A Team steps in and clears the undead in a blink.

Later that night Eugene overhears Carter telling other Alexandria survivors he will kill Rick and take back the town. Eugene freaks, drops a jam jar, and is nearly shot in the head by Carter. His bacon is saved when Rick walks in and disarms Carter. The man is given another chance to work with Rick and his crew. The act of mercy doesn’t fool Morgan. He saw the real Rick in the armory with a gun pressed against Carter’s head. Grudgingly Rick admits he wanted to kill Carter just so he doesn’t screw up and get anyone killed. But he doesn’t have to pull the trigger himself; he realizes men like Carter will always end up dead. It’s just the way things happen.

In the armory again. Rick finally talks to Jessie, Pete’s widow. She tells him off for the way he man-handled and berated Ron. Understanding the need to learn self-defense, Jessie has been taking shooting lessons from Rosita and will teach her boys herself. Without Rick. Guess there’s no booty calls in his future.

The next day, the day before they play out Rick’s scheme, the townsfolk who volunteered to help with the plan meet to map out the route Daryl, Abe, and Sasha will drive in order to lure the walkers westward. Abe stops Sasha and asks her if she’s on the mission to die. She says, “No.” The crew stop by a tractor supply store with a dozen or so walkers trapped inside banging on the glass. The noise will draw the horde away from the planned route. Rick says they’ll come back before dark to clear the walkers. Glenn stops Nick to tell him he will sit out the following day; Nick isn’t ready to take on walkers again.

They arrive at the quarry. Rick gives a rousing speech about getting the walkers before they attack the town. Then things go wrong. One truck blocking the eastern path falls from the narrow road, giving walkers a direct route to their backyard. Instead of simply planning their attack, they must now act on it. Carter, of course, argues that they aren’t prepared.

This is actually where the episode begins, if you’ve lost track. 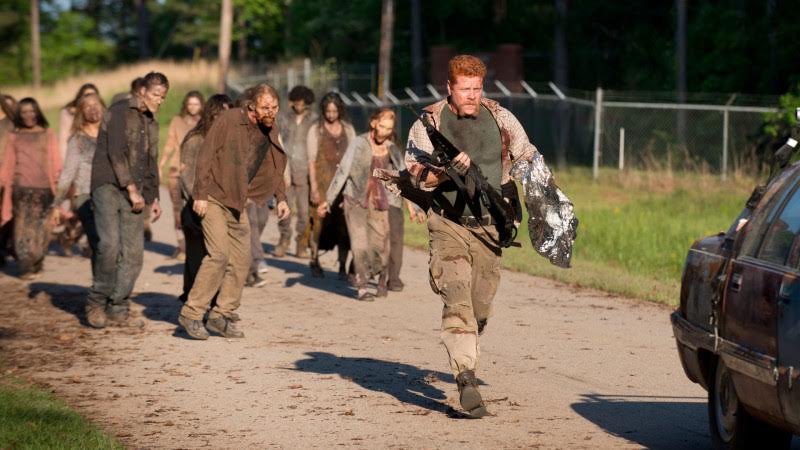 From here on out, it’s all walker action. Daryl plays pied piper, leading the initial rush from the quarry. Abe and Sasha meet him at the hill’s base. Together they lead the horde from the quarry east. While they’re driving, Glenn, Nick, and Heath double back to the tractor store to deal with the noisy walkers. After a false start on the killing, they eventually just blow out a window and open fire. Nick saves Heath’s bacon. It redeems him in Glenn’s eyes a little. Michonne, Rick, and Morgan wait on the far side of the barricade with flare guns. When the horde reaches them, they shoot westward, drawing the walkers’ attention toward where they need to shamble. At one point, a few walkers wander off. Abe jumps from the lead car and lures them back onto the road. When Sasha asks him why he’s acting like a nutjob—talking about pieces of Pete’s brain still in his ear—Abe says he’s just living large, much like Sasha when she snapped and slaughtered numerous walkers for fun.

Everything is going smoothly. Until Carter is grabbed and bitten by a walker. He squeals like a stuck pig, drawing walkers off the road. Luckily, or unluckily, Rick is nearby. He kills Carter. Michonne and Morgan lament the death, but both understand that’s just how it is nowadays. The others alongside the road fire their guns to draw the walkers back. It works. Well, for a moment. Not long after a horn sounds, distracting the walkers again. The horn is coming from Alexandria and now a few thousand walkers are out to find it. 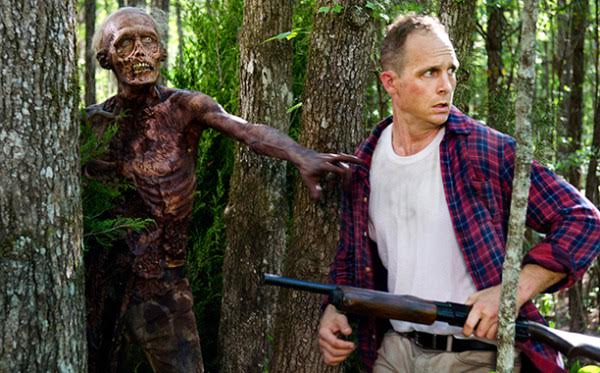 Instead of presenting this version of the story, the showrunners decided to start with the zombie horde and edit the episode to flow inside out, starting in the middle for the present action and the beginning for the flashbacks. If they’d edited it better, I wouldn’t be so livid. Instead of large story chunks to lay groundwork, they cut it into tidbits, dropping ten seconds of storyline here and there amongst personal dramas and too-long clips featuring walkers, well, walking down a road. The undead action stopped being cool the second they hit the road. Then it became a rainy-day parade with no bathroom in sight, but you’ve down an entire pot of coffee just to be awake enough to watch the soggy festivities. It’s not fun. It makes no sense why you would put yourself through such torture for maybe a few enjoyable seconds as your favorite float passes. But it’s not the same. It’s not as entertaining. You begin to wonder if the parade will even be worth attending the following year if there’s a chance of rain.

I’ll tell you right now, if the show pulls this flashback stunt again, I’m not only done with the parade, I’ll forget there’s even a holiday to hold a parade for, rain or not. This episode was a waste of time. Whoever edited it and the people who then looked at this cut and said it was good to go need to relearn a few story-telling basics. The episode is a joke. My ability to take anyone in TWD’s post-production staff seriously is fractured. Just like my sanity after piecing the plot together for you guys. Here’s hoping the next episode makes more sense.