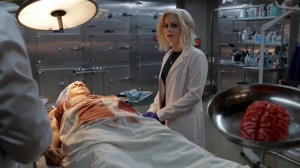 This case ties directly into last week’s basketball-loving fest. Harry Cole, the man who murdered a scary debt collector and witnessed Mike Hayden’s murder, is gunned down on the courthouse steps yards from Clive. The killers get away on a motorcycle. Clive tracks their progress toward the water. Assuming they dumped the bike, he orders a dive team to search for it. While awaiting word from the dive team, Clive and Liv interview Roger Thrunk. He’s the “fixer” for Harry’s law firm and the man accused of killing Mike Hayden. Despite appearances, Thrunk isn’t a practicing lawyer. He hasn’t been in the courtroom in nine years, yet has a rather nice office at the firm. They have no solid evidence on the guy with Harry lounging on Ravi’s examination table and Thrunk knows it. He enjoys taunting them about the vague meaning behind his one phone call since arriving at the police station. Who did he ask his associate to take care of?

It doesn’t take long for Harry’s compulsive gambling to take over Liv’s life. All her small wagers lead to a vision which isn’t completely redundant. Enter The Barber, Harry’s bookie. 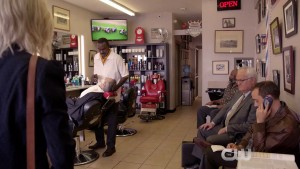 It’s not just a moniker, the guy actually runs a barbershop. He’s also incredibly quick-witted and intelligent, keeping his lawyer perched on the sidelines in the shop more or less constantly. The lawyer is kind of a nitwit, though. They get nothing of note from The Barber. Liv takes advantage of the proximity to Harry’s obsession and places a bet—the first of many in the episode.

Hitting a dead end, Clive makes the unpopular decision to crash Harry’s funeral to talk to his widow. In attendance is Calvin Owens, a big time basketball star who happened to go to college with Harry. Clive’s fanboy shows big time. Good thing, too. All his gushing prompts another vision: Calvin turning his back on Harry and refusing to pay off any more of his debts.

Thanks to a crime scene tech who plays by the rules, Clive and Liv figure out who Thrunk wanted taken care of—his pet turtle. Only, when Thrunk’s associate realizes the tech is calling a detective, he bolts. The turtle is brought into the station. That’s one happy turtle, man. He has enough cocaine stashed in his ceramic house to—well, I’m not sure what a turtle would do with cocaine, but there was a lot of it. They have enough evidence on Thrunk to put him away. Mike Hayden’s case is finally wrapped up.

But who killed Harry? The final puzzle piece clicks in place when Liv heads back to The Barber to place a bet on a basketball game based on Calvin’s recommendation. Every man in the shop pauses for a moment when she says his name. The Barber alludes to Calvin’s involvement in gambling before. But he’s either really good at it, seeing as he’s living in a mansion still, or he was on the other end of the gambling game. After some digging, Liv realized Calvin shaved points off during the final quarter in most of his college games in order to help Harry. About the same time the dive team coughs up information about the motorcycle. Hey, it just so happens to belong to the sons of Calvin’s former teammate. Turns out, Harry threatened to blackmail Calvin if he didn’t pay his current debt. Tired of hemorrhaging money, Calvin hired hitmen. Case closed.

But there’s so, so much more in this episode. 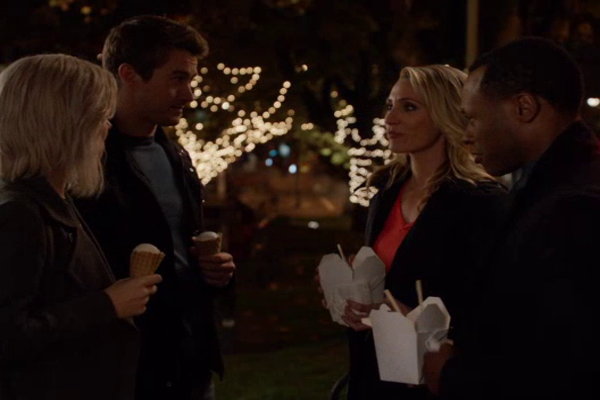 Liv and Major are sickening sweet together. There’s still that one little catch; they don’t know if they can safely consummate the relationship, even with protection. Ravi tests every condom brand known to man—and makes a condom balloon animal, too. Turns out the zombie virus is so small, condoms are completely ineffective in preventing infection. Damn. They can get creative, right? They may not have long to get creative. Clive and Bozzio are inching closer to officially reopening the Meat Cute case. Not only that, Bozzio is now one-hundred percent totally chasing Major as the person abducting these wealthy businessmen. He adds a notable name to his list at the end of the episode. 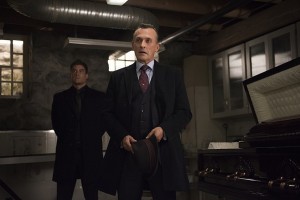 Which is where Blaine comes in. Or rather, his father. Papa DeBeers doesn’t take threats lightly. He’s been digging into Blaine’s life, trying to find a way to destroy his son’s little fiefdom. Luck comes when he discovers Blaine’s makeup artist and tortures her for information, including Blaine’s client list. Little DeBeers is now demoted to a gopher, sent to fetch the brain from one of his father’s rivals. Joke’s on Pops. Blaine doesn’t retrieve the brain he asks for. Instead, he pays a visit to Grandpa DeBeers and takes his. There’s a whole mountain of remorse before, during, and after the act. Which is for naught. Angus DeBeers joins the growing list of missing businessmen. Well, he’s not completely missing. Major knows exactly where he put the guy on ice. Literally. Angus is in a freezer with two other men.

There’s trouble in Peyton’s plan to finally bring Mr. Boss to justice. Boss knows. He’s creepy as hell, to boot. Late one night, Boss pays a visit to Peyton’s office. He’s not very subtle; Peyton has two choices, accept a bribe like three district attorneys before her, or vanish like the one who didn’t. It doesn’t take Boss long to figure out who fed Peyton her information, either. There’s a new list growing, a list of people Boss will take care of in order to keep his place in the drug world’s hierarchy.

I’ve got a feeling someone will not make it through this season alive.