Here’s your spoiler warning. Proceed at your own risk.

…They make a run on the food pantry, ignoring Olivia when she reminds them they have to ration until the walkers clear and they can make a supply run. Spencer, Deanna’s son, steps in to lend a voice of reason. Then he turns around after everyone is gone to pillage what he wants. My opinion of the guy was already pretty low, but after he left the gate open for the Wolves and stole much needed food? I hope his drunk self falls off the wall while he’s on guard duty. Spencer isn’t the worst off emotionally, either. Betsy, wife to David who died in the last episode, and a few others paint the names of the dead lost in the attack and partially failed mission on the wall—including Nicholas and Glenn.

After creating the tribute, Betsy returns home and slashes her wrists. Jessie finds her after, zombified and banging on her front door. This leads to Jessie making one of several drawn out speeches during this episode. Not every speech comes from her, though she has to say something after Betsy dies in order to keep the others from seeing suicide as a viable option. It just feels like anytime there’s a sliver of tension, Rick or someone yanks out the soapbox and lets it rip. For heaven’s sake, Rick makes a loud speech about being quiet to avoid riling the walkers while standing next to the compromised wall section with about a thousand zombies leaning against it trying to get to the booming voice on the other side. There’s a point where the writers need to give up this trope and move on to other ways to motivate a crowd. Start a conga line or something. I don’t care so long as I don’t have to listen to another sermon from the Ricktatorship pulpit. 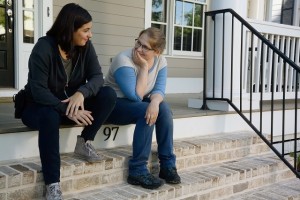 Healthy ways to cope with the stress do not involve attacking each other about a girl. A lesson Carl and Ron desperately need to learn. Enid is still presumably on the outside. Carl asks Ron to help and is rejected, with a threat to tattle to Rick if Carl hops the fence. He ends up going to Rick anyway in order to cash in the rain check on those shooting lessons Rick promised back at the quarry. Another unhealthy coping mechanism is attempting to tenderize a walker with a broken bottle. Deanna, I’m looking at you. Your cool flew out the window the minute the Wolves attacked. Get your act together. Tara seems to be the best adjusted to the stress. She manages successfully to talk Denise off the metaphorical ledge when the new doctor cannot find a way to clear the infection in Scott’s bullet wound. And, hey, she gets kissed for her efforts. It’s a win-win.

Desperate for answers, Maggie prepares to drop over the wall and search for Glenn. Aaron, heavy with guilt because the backpack he lost when the Wolves tricked him and Daryl with the tucks led the attackers to their door, insists she let him help. He even knows a way out which won’t break her leg if she falls wrong. They take to the tunnels running under Alexandria. Down there, they face walkers so soggy and muddy, Maggie’s hand goes right through one’s chest. She’s nearly bitten, yet still tells Aaron to go back and tend to his wounds. Yeah, not happening. Then again, neither is the mission. The tunnel exit is too close to the herd. 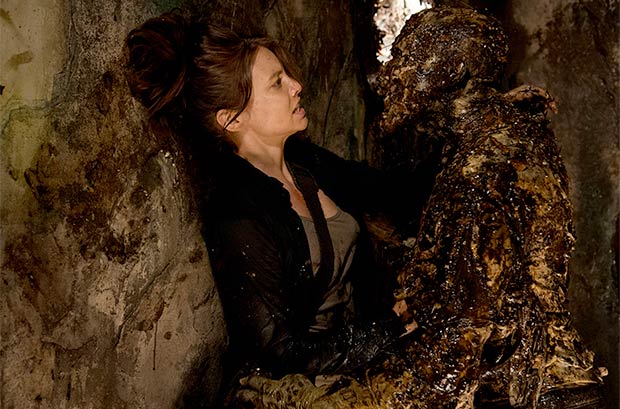 Despite everything in her demanding she find Glenn, Maggie won’t risk losing the baby. It’s the last piece of her husband left; she doesn’t even have a picture. That night when Maggie and Aaron search the area for a signal from Glenn, they take a moment to erase his and Nicholas’ names from the memorial wall.

There’s a change in the guard coming to Alexandria. After Deanna snaps and attacks a stray walker—Carol lost track of only one Wolf she killed and he turned in the walls—Rick swoops in and makes the actual kill. Crouched on the pavement, covered in walker blood, Deanna tells Rick, “I wanna live. I want this place to stay standing.” She realizes her mental capacity cannot handle the stress from all the losses, but Rick seems to be doing just fine. Obviously he’s the better choice for leader, right? NO. WRONG. But the decision is made. Rick celebrates his new position by kissing Jessie. Okay, that wasn’t the real purpose to their conversation, but it might as well have been for all the sense it made. Somewhere along the line, the writers forgot how to have Rick talk in coherent thoughts.

The future is not so bright for Alexandria. The fence, though reinforced, is failing where the truck hit. Four of their best fighters are still in the field. Morale is in the tank. There’s a crazier leader taking the throne. Oh and let’s not forget the crazy guy waiting in a jail cell. Yes, they survived to see another day, but how long will their luck hold out?