The gang somehow finds themselves carless and hopelessly surrounded by zombies at the United States/Mexico border. Murphy’s near-death experience means he’s more a sack for them to heft around than useful for keeping his kind at bay. They’re cornered. No chance to fight their way out with maybe four bullets amongst them. All hope is lost. The mission is over!

Wait, is that Escorpion peeking from a basement door? Follow him, guys.

Down they go into what I can only assume is a power plant of some sort. The Zeroes found a way to make the zombies work for them—without chaining them to a giant wheel like the ill-fated survivors in Burrtown—by cramming them in a tank and letting them decompose. The compost’s heat runs the turbines for the Zeroes’ power plant. It’s ingenious, really. We may have found the one group with high enough IQs to recreate society if the zombie outbreak is ever controlled. 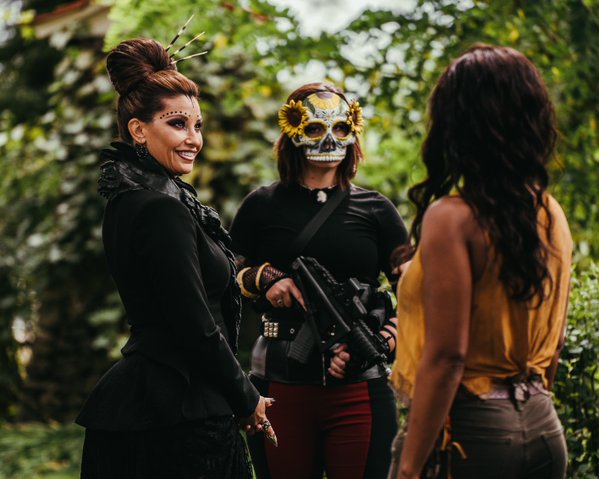 That’s exactly what their leader, La Reina, plans to do. She needs a little help, first. Which is why Escoprion keeps popping up in the crew’s way. The only surefire way to end the outbreak is to make a cure. For that, they need Mr. Murphy. La Reina is freakishly possessive of Murphy. He and Roberta are treated like heroes. But not even heroes get to keep their weapons in the queen’s presence. The gang is disarmed before they’re allowed to venture beyond the lush gardens within the Zeroes secure compound.

Inside, they’re taken to the lab where La Reina has recruited a scientist capable of taking Murphy’s blood and delivering the cure her entire plan for the future hinges upon. One guess who lurks in the tiny, bloody lab . . . . Yup, Dr. Kurian. Roberta nearly kills the guy then and there. She hesitates, a weakness La Reina catches immediately. Why won’t Roberta kill Kurian? He may be the only PHD left on the planet capable of synthesizing a cure. Which he can’t. But she doesn’t know the truth.

Only Murphy understands why they’re all about to be up Feces Creek. Kurian has a plan, though. One which will put Murphy firmly atop the food chain from here on out. While the others are off receiving their reward from La Reina, Murphy hangs back in the lab to snarl at the man who ditched him back with the phytozombies. Kurian talks Murphy down, then wins him over when he produces batch one of the Murphy-zombie serum. It’s not perfect, but effective. Murphy has full control of the unfortunate Zero goon Kurian turns. The scene is thrilling. *wink wink* 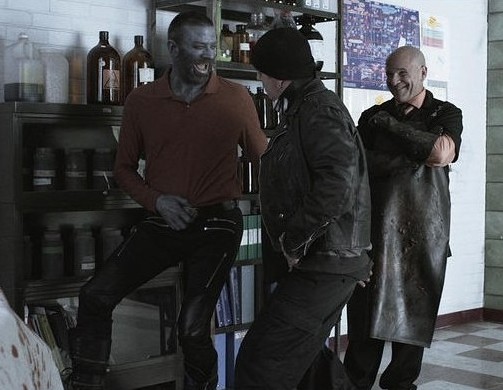 What about this reward La Reina promises the crew? Well, they can either take a lifetime supply of whatever they wish, or become cartel members. Vasquez spots the trap. The Zeroes never give options. Either they join the cartel or die. But there’s a catch—they have to pass the examination. Ambushed, the crew is dropped into an improvised gladiator arena. The examination is simple, whoever survives both rounds in the arena becomes cartel members. Round one is a cakewalk. Addy puts the lone zombie down without blinking. Round two is trickier. In the dark, the gang must dispatch about a dozen zombies. For our crew, it’s no problem. They’ve faced worse since leaving New York.

Now everyone is Team Zeroes. They just need to look the part. Before the gang parties, they take a trip through the Zeroes’ Day Spa for makeovers. 10k doesn’t know how to react to his pedicure and Doc’s beard will never be the same after. Even their weapons get a makeover—cleaned, sharpened, and loaded before Escorpion returns them to the crew as part of their cartel induction.

Vasquez is going to blow it for everyone. He realizes Escoprion was the masked man who killed his wife and child. Despite Roberta imploring him to be patient, wait until they create a plan to escape Mexico, Vasquez still attempts to shoot Escorpion in the middle of the shindig. Desperate to avoid being killed, Roberta thwarts the attempt. Vasquez is taken into custody for questioning because everyone thinks a Reina is his target. But if she’s the target, surely he’s working for someone. Yet again, Zona is brought up, with the addition that it’s populated by “rich bastards.” A trussed-up Vasquez bobs and weaves around Escorpion’s questions like Julio César Chávez in the ring. The interrogation ends when Kurian requests a meeting with La Reina.

The cure is finished! Not really, but the Zeroes don’t know there is no chance of making a cure from Murphy’s blood. Kurian’s verbose bragging does nothing to convince La Reina the cure works. She wants proof. Vasquez becomes the volunteer for the inaugural dosage.

The episode ends with a needle at Vasquez’s throat. Yes, I yelled at the television. No, I have no patience to wait for a week. The show’s producers are evil for okaying the To Be Continued ending.