Yo, where are you going? ID, please. The show we’re discussing uses profanity and contains adult situations.

Kelly still thinks she’s going to bat her eyes and get Ash to help. Man, she’s not paying attention. Ash is out to care for numero uno. In order to save his bacon, and by default everyone else’s, he’s gotta figure out what’s actually written in the Necronomicon. Thirty years schlepping the thing around and he didn’t think to do this before the end of the world is nigh? Man, and I thought I procrastinated hardcore. Kelly gives up simply asking for help and steals Pablo’s motorcycle so she can save her dad.

Oh and Pablo says she took the Necronomicon. 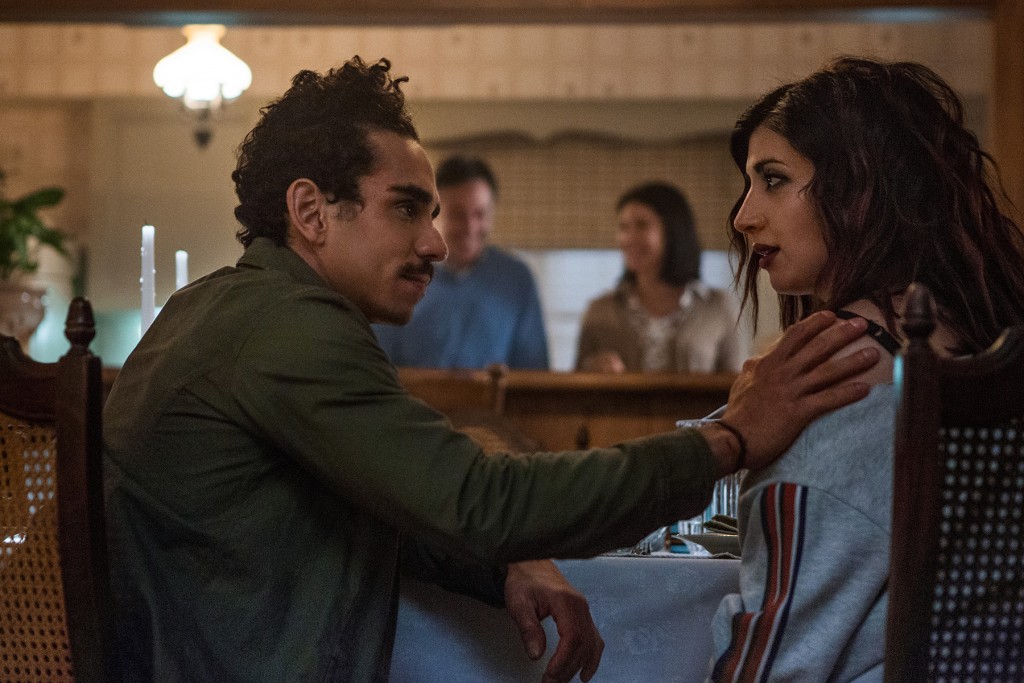 Cue a miraculous cleanup for Ash and Pablo, then we join them on the road. They’ve picked up a hitchhiker—Mr. Roper. Well, he’s DeadRoper now, and he still hates Ash with the fire of no less than ten-thousand suns. Most people do. He’s not unique. What is unique is the in-car fight between DeadRoper, Ash, and hapless Pablo. Pablo thinks he can learn to fight like Ash. He takes one hit, all Ash needs to get into Fight Mode. Pablo, “…but I just got hit; I don’t know what to do!” You’ll learn, Pablo, or you’ll die. He makes a valliant attempt to save Ash, smashing a bottle over DeadRoper’s head. Yeah, that’s not going to work. But it does give Ash something he can partially hack the Deadite’s head off with before pushing it out the window for an oncoming car to behead. Now they have to clean up again. Will someone test to see just how much blood a moist towelette can remove? For science. 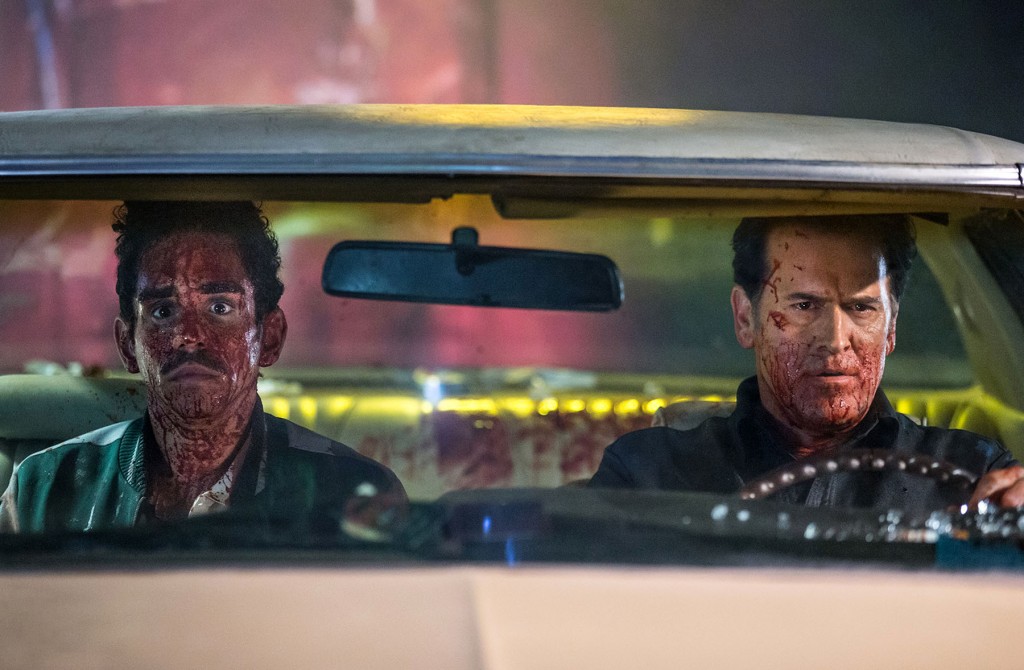 Amanda Fisher is on Ash’s trail, following the weird breadcrumbs to what was once his doorstep. His neighbors have nothing nice to say. Nothing useful, either. Amanda finds the business card for the book store Ash is trying to get to, thanks to the severed arm he left behind. Not his own. Her chase for clues ends abruptly when the state police arrive, shooing her away because she’s still suspended. That’s okay. She’s got the card and saw the police sketch of Ash. It’s a no-brainer from here on out. Just like the Deadites Ash offed.

At Mr. Maxwell’s place all is . . . comfy and cozy? Well, crud. Ash and Pablo look like asylum escapees, covered in DeadRoper’s blood and wielding weapons. Surprise, Mrs. Maxwell wasn’t dead. (Liar) She had amnesia after the car accident. (Pants so on fire) But she’s slowly remembering everything again. Yeah. Right. Ash sees through her game. But is he just paranoid or is Mrs. Maxwell really DeadMom? They should stay for dinner and find out.

Ash oozes charm at dinner. No, wait, that’s the roast beef oozing. Never mind. Just when the schtick has hit the, “Maybe she’s not a Deadite,” point, Ash takes matters into his own fist. One shot to the jaw does the trick, bringing DeadMom to the surface. There’s a couple weird boomstick point-of-view shots, which I actually don’t hate despite the camera jiggling, during the fight. As usual, the physical action is astounding. The gore which comes as a result of the fighting is just as wonderful, done primarily with practical effects with a little digital to augment—which is how you do it, folks. DeadMom kills Mr. Maxwell. Then she and Kelly vanish. 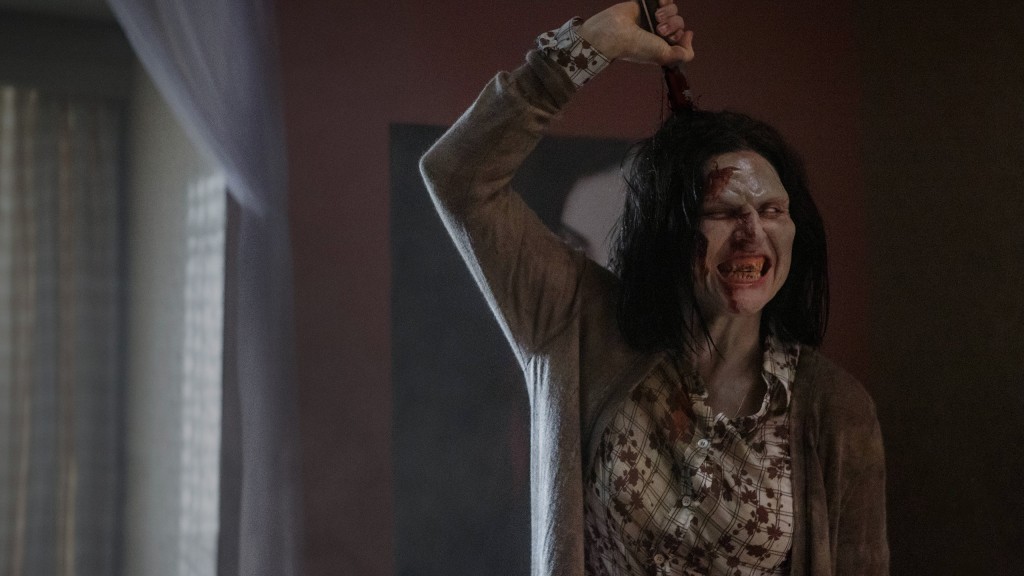 Kelly runs upstairs to hide and figure out what’s going on with her family. DeadMom is there, pretending to be regular ol’ Mrs. Maxwell. Maybe they can find a way to help? Yeah, no. DeadMom attacks when Ash and Pablo join them in Kelly’s childhood room. Poor Pablo tries again to jump into the fray, stabbing DeadMom in the head. No good. It’s gotta be decapitation. And the only thing they have handy capable of severing heads ends up stuck in a wall at one point. Get control of your chainsaw, Ash. Sheesh. He does, of course, unleashing about five gallons of blood on Pablo and Kelly.

They bury Mr. and Mrs. Maxwell in the front yard. Kelly officially joins Team Badass. But, uh, what about the book? Oh yeah, I forgot to mention that Pablo had it the entire time. That’s okay. They’re back on the road again, on the way to the bookstore. They better hurry. Amanda is waiting.