The fun and screams continue as Team Badass ventures to finally translate the Necronomicon—no, Pablo, I won’t call you guys The Ghost Beaters even if you paid me in fresh human flesh. Ash drags his unlikely partners along to Books from Beyond, owned by Lionel Hawkins, a self-made Necronomicon expert. He’s probably the only guy alive today who can read the book. Good thing nothing happens to him, right? 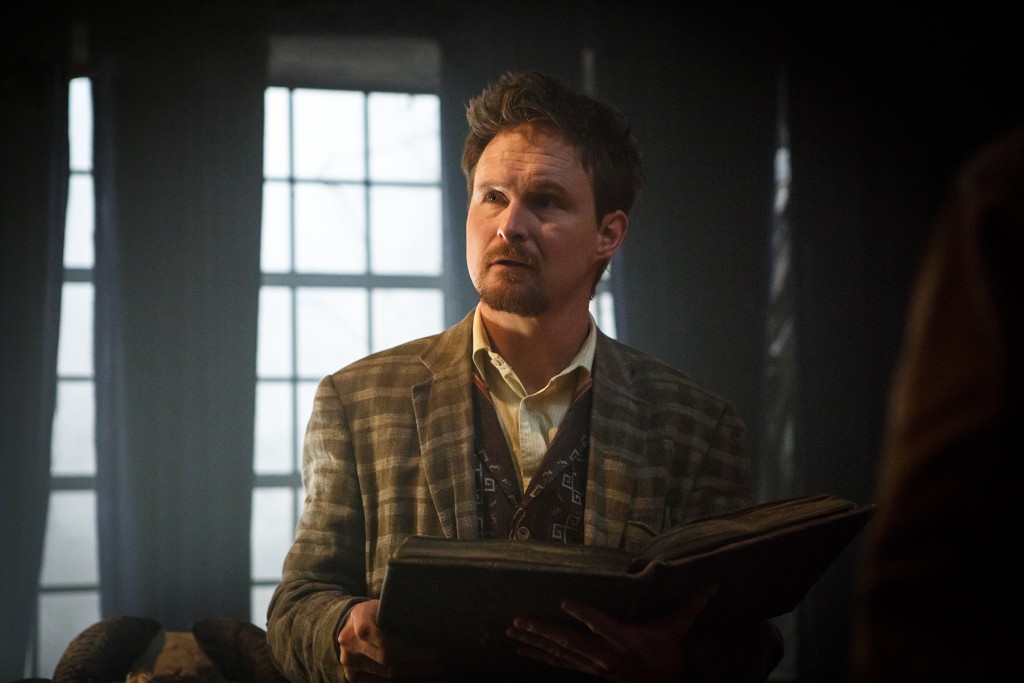 I’m getting ahead of myself.

The mysterious Ruby Knowby is on the team’s trail. She arrives at Kelly’s parent’s house not long after they drove off. Her taste in cars in commendable, by the way, but that’s not why we’re here. Ruby wants Ash and the Necronomicon. To find them, she needs information. That’s where dear old dad comes into play. Kelly’s father wasn’t properly buried for someone attacked by a deadite. They idiots left his head attached. When Ruby shows up looking for Ash’s trail, she’s attacked by DeadDad. The fight lasts a laughable half a second before Ruby impales DeadDad on his wife’s grave marker and begins her interrogation.

DeadDad isn’t a stool pigeon. He’s of no help to Ruby, refusing to cooperate. That is until she pulls out a wicked knife which just so happens to scorch deadite flesh on contact. Groovy. Where can I get one? We have to assume DeadDad talks. I hope he did. It’s about time Lucy Lawless and Bruce Campbell were on screen together. My patience wears thin waiting for this momentous occasion.

Over at the creepy as hell book store, Lionel is one happy puppy when Ash gives him permission to touch and read the Necronomicon. His joy is cut short when Amanda Fisher, still not back on duty but a pain in Ash’s backside nonetheless, bursts in thinking she’ll just snag Ash and end the newfound problems in her life. Think again. Pablo, fresh from his rejection after Kelly calls him “the little brother I never had,” rushes to Ash’s defense, clocking Amanda on the head with a femur. They cuff her to a ladder, leaving Kelly to watch over the officer while the guys go into the back to learn a little Necronomicon history and royally screw everything up some more.

Translating the book is about 25% skill and 75% talking out one’s backside, or so it seems when Lionel cannot find a clear answer to the Big Problem: How do they close the portal Ash opened in order to get laid? There’s some vague thing about the key being in The Man, which Ash assumes is him. Then the braintrust does exactly what they shouldn’t, plan to summon a lesser demon and ask it how to fix Ash’s boneheaded mistake. It’s Pablo’s idea, which he wants nothing to do with once things are in motion. Lionel is beside himself with joy at the prospect. Ash is still stuck figuring out why him. Don’t hurt yourself thinking, dude.

The women aren’t exactly making intelligent decisions, either. Amanda wakes and is understandably livid about being cuffed to the ladder. Kelly’s sympathy button broke when she watched Ash hack her mother’s head off. She’ll watch Amanda and let the guys do their thing. That is until whatever they’re doing in the back room makes weird things happen out front. Suddenly having another ally seems like a good idea. Amanda even agrees with her; if Ash and the others are trying to stop the deadites, then they should all team together.

They’re not cooking with the same kind of logic in Books from Beyond’s back room. Lionel is eagerly setting up the ritual space, creating an altar and a protective circle to trap the demon—safety first, kids. So long as no one breaks the salt circle, they’re good. I mean, it’s only a lesser demon. How bad can it be?

Eligos isn’t some infant-sized demon, as they assumed from the picture in the book. It is downright terrifying, actually. The design for the demon is astounding. Better yet, it’s practical. As in, there was a guy in a rather hideous costume on set for the actors to work with and not a tennis ball on a pole to get the sight lines correct. The only computer effects came in when Eligos had to move and fight. Oh and they blurred his junk for the actor’s modesty. How kind.

Okay, back to what a poorly thought out plan this is.

The demon isn’t particularly helpful. Ash asks how they undo what he’s done. Eligos wants to barter—his freedom for the answer. Yeah, not happening. He asks again, what can they do? “Die quickly; that is my only advice,” Eligos tells the men. He’s so helpful, that Eligos.

Before Ash can make yet another vain attempt to get a straight answer, Amanda bursts into the room. She lied to Kelly. She’s still going to apprehend Ash. When Ash doesn’t comply to Amanda’s order to disarm, she shoots a warning shot beside his chin—it is the biggest target, after all. The show startles Ash. He breaks the protective circle. Eligos got his wish, he’s a free elf . . . I mean, demon.

Eligos attacks. Amanda is knocked out. He digs his powers into Ash’s mind, destroying it from the inside out. The demon is wicked fast, moving in quick jumps around the room, making it impossible to shoot him. Ash shatters a window. It gives Eligos the weapon he needs to prevent Lionel from reading the spell to return him to the other side of the portal. Lionel takes several huge glass shards to the face and dies. Poor Lionel. 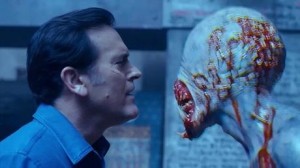 Pablo, who spends a good chunk of the fight hunched behind a table with Kelly, grabs a gun and tries to shoot the demon. It does no good, but breaks it’s hold on Ash . . . just long enough for it to circle around and snag them both. As they only one left to save the day, Kelly grabs the Necronomicon—it started the mess, it should end it, too—and whacks Eligos with the book. The demon vanishes in a puff of black smoke. Nifty thing to remember next time they summon pure evil. That was sarcasm.

Amanda can’t catch a break. After Pablo and Kelly head to Ash’s can, Amanda wakes and still tries to apprehend Ash, cuffing him. He slips his wooden hand off and cuffs her instead. She’s left in the book store alone. Or not. Lionel returns as DeadLionel and he’s got his eyes set on Amanda. She better figure out how to escape.

Left at yet another dead end, the team’s spirits are low. What can they do? The most helpful thing Pablo can suggest is visiting his estranged uncle, the family brujo. Given the lack of anything better, off they go to talk to the uncle Pablo hasn’t seen in quite some time.