We do get to see the crew walking—yes, they killed every last El Camino they stole—through sunny and thoroughly destroyed southern California. Anaheim, more precisely. Yes, they do indeed tromp through Disneyland’s ruins. No, there are no Mickey Mouse zombies. Yes, I’m slightly disappointed. Lest viewers think this episode accomplishes nothing for the plot, the crew does indeed finally arrive at the coordinates Citizen Z gave to them. It’s not quite what they were expecting, though—a ramshackle dive bar with an older tea-slinging woman behind the bar. While the team scout the bar, Citizen Z discovers a hacker’s fingerprints on his system. After some tracking, he discovers whoever broke into his laptop accessed files for Operation Bitemark. Is the op compromised? 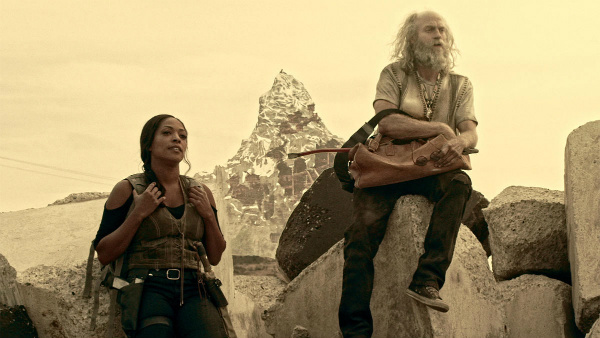 And now, a peek at the crew as they were before the apocalypse changed them for better or worse.

First up, Citizen Z, a.k.a. Simon Cruller. Our favorite computer wizard wasn’t always on the NSA payroll, it seems. Nor does he look good in an orange jumpsuit. Simon’s hacking skills landed him in federal lockup with impending espionage charges. He won’t plead guilty. Which is good because NSA needs him to join them on their next greatest mission, one so secret, Simon can’t even tell his lawyer what it is—zombies. Obviously the intrigue offered by the NSA worked. Simon signed on with them, went to their north-most outpost, and has been a one-man tech team keeping Operation Bitemark alive.

We flashback to Roberta while she’s struggling to keep tabs on deployment orders for her unit and the other units at the same National Guard base. Her stress levels bounce off the ceiling several times, but her compatriots aren’t bothered by any of it as they catch a game on TV before moving out. Everything is pretty SOP, until there’s a crash outside. An ambulance rammed into the building. The driver is MIA. The patient strapped in the back is still very much present, and very much undead. Roberta tries to help the patient, under the impression he’s panicked and injured. Yeah, no. She heads inside to call for another ambulance. The phones are dead. Ditto for her unit, unfortunately. They attack her and she’s forced to put a bullet in their heads. Quick on the uptake, Roberta figures out they’re zombies without anyone spelling it out for her. Her fast-thinking may be why she’s the one leading the team. Or, you know, not being a martyr.

Turns out Doc wasn’t always high as a kite. His five-year sober streak ends with the apocalypse, though. It’s just another day in the office for the kindly therapist. His patient is likewise dealing with addiction and they have a pretty relaxed dialog—anything else in Doc’s presence is unheard of, to be honest. There’s another therapist in the office, who can’t quite handle her manic patient. Doc has to save the day, strong-arming the guy and talking sense to him. While the therapists work, the outside world devolves into chaos. That chaos finds its way indoors. Zombies eat the other therapist, her client, and Doc’s patient. Doc eats an OxyContin tablet to brace himself for what’s outside before escaping into the fray. Right after we came back from his flashback, Doc finds a Z-weed joint and lights up. Not much has changed since Doc saw his first zombie. 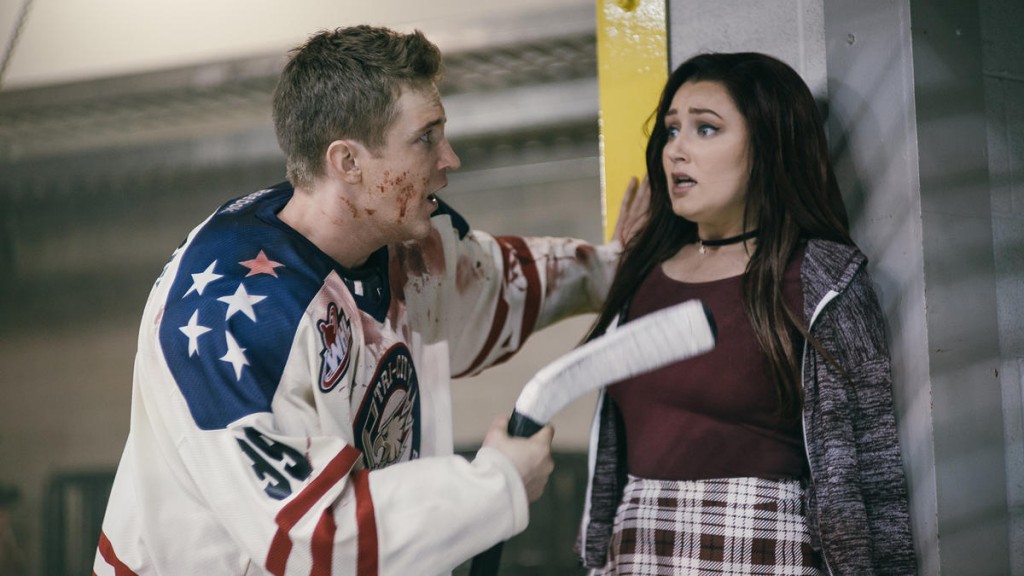 You guys ready for the surprise guest? Mack returns for Addy’s turn in the way-back machine. He’s on the ice, being ferocious during a hockey game. Addy is just as fierce in the stands cheering on Mack’s opponents. Just when the game gets good—Mack and the star player from the other team drop their gloves to duke it out—a zombie runs through the stands and smacks into the Plexiglas. From there it’s pure chaos. Mack and his sparring partner leave the ice together. The other guy doesn’t make it far. Addy manages to dodge the crowds, ducking around the worst of it until she runs into Mack, who can’t quite kill the zombie snapping at his throat. Addy lends a hand and the two team up. Mack has a chance to return the favor, braining a zombie pinning Addy against the wall. They make a pact to stick together. Which means Mack is tagging along when Addy realizes she has to get to her mother and brother at the house. Tagging along, in the end, is what lead to Mack’s demise. Was it Addy’s pretty eyes or an overly large sense of duty to help others? I’d say a dash of both, honestly. He stayed with her in the beginning because they both needed help. They remained together later because he just could not let her go and the mission became much more important after Murphy nuked half the USA.

We saw the most emotional part to 10k’s apocalypse beginning a while back. What we didn’t see was bright-eyed 10k, then simply Tommy, encountering his first zombie. He’s out on a camping trip with his dad, enjoying an afternoon fishing alone. A forest ranger, undead of course, shambles his way with three arrows in her chest. Quickly more zombies join them—hunters and rangers who were likely attempting to kill the zombies in the forest, only to die in the process. Tommy drops his fish and runs. He’s nearly z-lunch when his dad catches up, clearing the zombies with precision shooting. Now we know where 10k learned his skills from. Skills he puts to use daily. His dad must be proud.

Grab your tissues, Vasquez’s flashback hits a few emotional triggers. Guilt-ridden over the deaths of his family because of his job, Vasquez tortures himself mentally. He’s keeping watch over his wife and daughter’s caskets in an unlit funeral home. The funeral director doesn’t even know he’s in there until he accidentally walks in, then gives the mourning man time alone. Vasquez kneels to pray. Scratch, scratch. He calls to the funeral director to ask if they have rodents in the building. No answer. The scratching continues. Finally the director comes back . . . or at least his reanimated body does. There’s a fight. Vasquez empties his gun into the zombie’s chest. No good. He ends up bludgeoning the thing to death. Good timing, too. He’s just in time to watch his undead wife and child crawl from their caskets. His gun is empty. He has no backup. Vasquez realizes he will have to beat his family like the funeral director. We don’t see the kill. We just hear Vasquez’s anguished scream as he realizes what he has to do. Killing his family for the second time hardened the man beyond what was necessary to do his job. Wandering the apocalypse alone turned that into a ruthlessness and stubborn moral code no one can break. Not even Roberta.

Last stop on the flashback train—Murphy. As expected, he’s in jail. 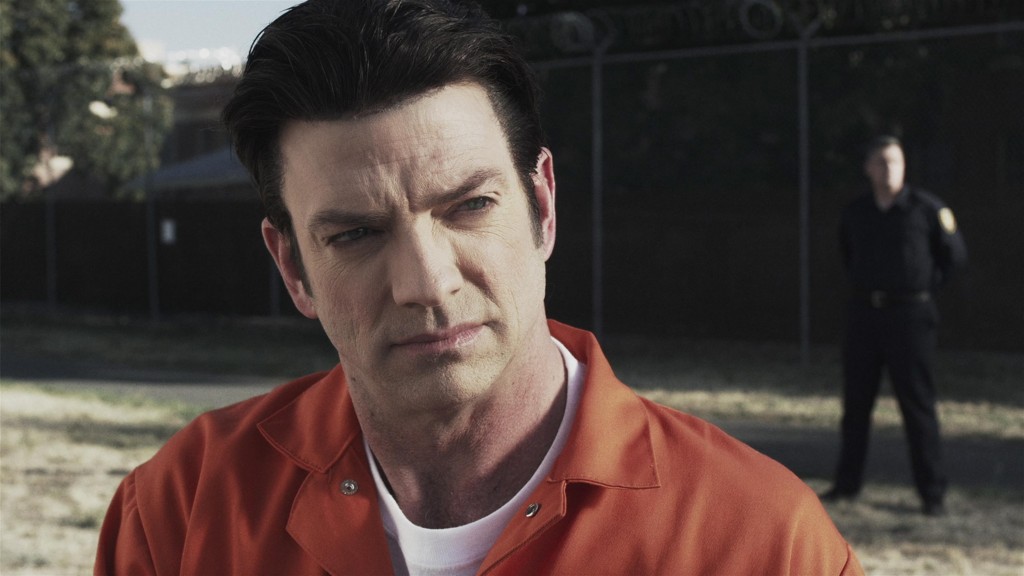 Unexpectedly, Murphy doesn’t look a thing like himself because I am so used to seeing him blue and covered in scars. But when he opens his mouth, it’s pretty much the same smart aleck the crew has dragged from New York to California. He’s hosting a poker game in the prison yard—where he’s doing time for postal fraud. As sometimes happens, a prisoner is stabbed in the yard. Yeah, you guessed it, the guy turns zombie. Everyone panics when the guards start turning as well. Murphy saves his own hide, running through an open gate and closing it before his poker pals can join him. It’s always been Murphy First in his book. Then the vaccine made him actually care about the well-being of the zombies. Feelings are uncomfortable. I get it. Being The Guy to end the apocalypse? It’s too much to bear. Murphy tells himself, “I don’t want to be the savior of the human race. I don’t want to be the zombie messiah.” He doesn’t want to be accountable for his actions anymore. If he screws up, like he did to land in prison, that’s it for humanity. That’s an awful weight on his shoulders. When he breaks down, Roberta gives it to him straight, “There isn’t a happy ending for any of us, but you, you are the one person who can change that.” How long can she keep him together? At this point, it’s like fixing a shatter vase with bubble gum. It’s holding, but ain’t pretty.

There’s one episode left in season two, with a season three already ordered for later this year. How much chaos can they cram into this finale? It’s hard to top nuking the country.