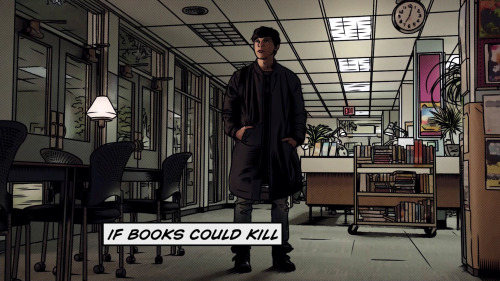 Pumping Liv with “horny librarian brains” gives them a blanket pardon to sell their floundering product with cleavage and numerous make-out sessions. Jumping on the bandwagon with the episode title is like a rocket pack strapped onto the show’s pet shark. If Liv isn’t in bed with someone, they don’t know what to do with her emotionally. She’s either the postal child for bipolar, riding hard on each brain she eats, or she’s sex-obsessed and weeping. There’s few middle-ground moments where she remembers herself. They tried to establish control over the brain in this episode, but given the big picture, it isn’t effective. She still ends up in bed with a hot guy—Drake the newly undead zombie, who also happens to be a double agent for Blaine in Boss’ drug ring. 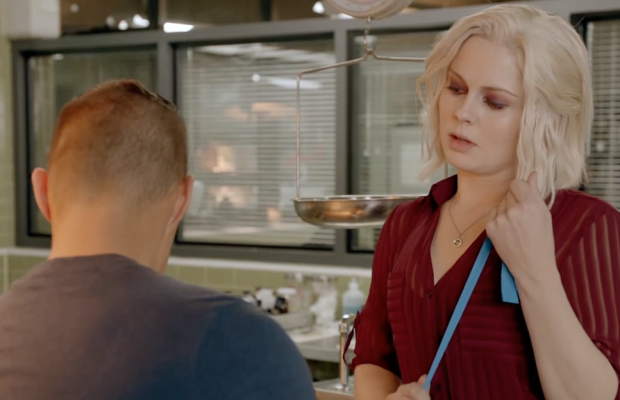 It’s all so predictable. As is the case’s conclusion.

If you follow this show regularly, you’ll notice a startling trend to their crime-solving tactics. Inevitably, the murderer is actually the first solid suspect in the case or the spouse—Often, they’re one in the same. Occasionally they’ll pull a Shyamalan, leaning hard on the plot-twist gimmick and convenient case solutions. Yes, this is a dramedy leaning harder on the comedy side at times, but there still has be natural tension resolution and variety in the cases they cover. Most episodes, we know who did it not long after they find the bodies just by following their simplistic pattern.
Long story short: All writers are petty and jealous, but not petty enough to kill. Meanwhile husbands are equally petty and jealous and they do indeed kill. The only way they managed to stretch Grace LeGare’s case to the episode’s end was to make Grace’s husband, Andy, physically handicapped and therefore not an obvious threat. His original questioning with Clive is glossed over by Liv’s incredibly raunchy day dream featuring Andy’s home care assistant, furthering the vain attempt to obscure the writer’s sole solution to any woman’s murder on the show. In the end, Andy went to a lot of work destroying his wife’s chance at a career writing erotica, then pinned the murder on Grace’s library co-worker, Muriel—who also happens to be a writer, but she pens crime thrillers. Why? So people wouldn’t think he is less of a man.

Blaine goes from having an awesome week to a not-so-awesome week overnight. Bozzio and Clive dig deep and discover his real name. No, not the one we’ve heard all the time, but his really real name. The pieces fall in Clive’s lap at last. They waste no time scooping up Blaine and hauling him to the police station for questioning. For a guy who’s had his junk metaphorically kicked twice in a row, he’s pretty smug. In comes his knight in shining armor—armor he’s seen up close and personal after drinking and sleeping with Peyton in her office the night before. Blaine is a key witness against Boss and therefore has immunity. Clive lays out what kind of guy he thinks Blaine is to Peyton. She still gets Blaine out of the handcuffs, but then turns to Liv for verification about who Blaine, John to her, really is. It breaks Peyton.

A lot of dead-ends for Bozzio and Clive in this episode. They finally get the GPS tracker in the missing guy’s dog turned on. Major overhears this plan and panics, downing a Max Rager and parkouring his way to the groomer where he left the dog. He lies to the groomer, telling her he rescued the dog from an angry cop and if the cop comes around to find him, she has to lie. Major panicked, and stupidly abandoned the dog on a city bus, for no reason. The GPS chip is in the dog’s tags, which Major ditched after he originally kidnapped it. Most heart-breaking, Major lies to Ravi about the dog’s whereabouts, saying he gave it back to the family who lost it.

It feels like they’re trying to tie up loose ends by continuing the age-old tradition of bone-headed moves by the lead characters. They want us to like Major, yet he continuously perpetuates animal neglect. Liv only has personality with a man in her bed. Peyton is set up to die soon given how deep she’s gotten in the Boss case. And Ravi? He’s keeping to himself, searching the field of woes and missing the dog which shouldn’t have been.
Ravi may be the only character fans connect with anymore.