Yup, you guessed it. There’s spoilers in this review. I highly suggest you watch before reading.

Last week I mistakenly labeled episode 214 as the penultimate, when this week’s episode is the one leading into the now-inflated finale. My bad. In my defense, these last few episodes blurred together with nothing truly standing out until the last fifteen seconds in this episode. That gunshot is the only reason fans are hanging in to see the finale. They don’t care about this boogeyman we’re promised. They’ve bitten the Daryl-is-in-danger bait and swallowed the hook. 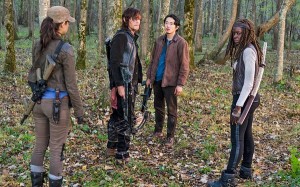 How did we get to a point where the most reliable defender for Alexandria winds up with an enemy bullet in him? I don’t even know. A lot of the logic they have Daryl working on right now doesn’t fit the Daryl we’ve known since he first calmed his roll and became a team player. Yes, people regress when stressed, but for him to completely snap and spiral in this guilt loop is whoa, wait, what? He’s a better man than the one they needed in order to lure so many valued fighters into the middle of nowhere. Yet again, they’re relying on the revenge trope to undermine character growth and create bad situations. Even Rosita gets sucked into Daryl’s mindset. Not that Glenn and Michonne fare much better after leaving the two to hunt Dwight and his gang. They’re surrounded and used as, yup you guessed it, bait. Snap. Reel. Toss the catch into the ice chest. Well, not yet. We know Daryl was shot, but not the severity of the wound. I’m gonna guess it didn’t tickle, though. 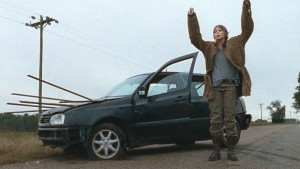 So that’s four fighters out of the way. Five including Carol, who snuck out during shift changes early in the morning with a fully-loaded go bag and a coat with some interesting modifications—which I totally want should the undead hit the fan at some point. They want Carol to seem traumatized, on the brink, but she’s premeditating pretty much everything that’s happened in the hours after burying Denise. An insane person would not take the time to cook herself that much food, let alone pack enough gear for a few weeks and sew a friggen gun into her coat sleeve. It’s like they don’t know who the character is anymore. Oh, wait. I’ve said the same thing since they set her on the Morgan witch hunt. A hunt which is flipped on its ear with Morgan and Rick awkwardly buddy copping it through the countryside looking for Carol. An homage to Rick and Shane’s fight way back in season two? Possibly, but the whole mistrusting Morgan story line is so convoluted, their discussion has no impact other than, “Duh, we know that’s how Rick thinks now.” It’s not a surprise he thinks Carol’s murders at the prison were justified. He just sanctioned widespread murder to wipe out the Saviors. Nor is it a surprise Morgan feels this is a poor plan. Killing leads to killing. Morgan saved a man, who saved a woman, who saved Carl’s life. Which is the preferred outcome? This is something they’ll never agree on. Matter of fact, things between the men are downright tense after they follow the blood trail to a barn and a man just looking for a horse. Rick assumes the armored man is a Savior or fled from Hilltop and wants to shoot him—ignoring the encroaching walkers. Morgan sabotages the shot. There’s some eye daggers before they continue the hunt for Carol, any surviving Saviors, and the Horse Guy—who may or may not be a hint to another comic book tie-in. We never find out what happens after Carol leaves the road where she killed a handful of saviors. 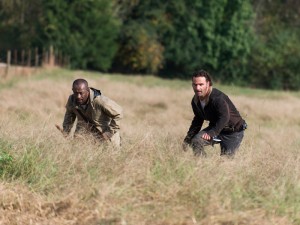 We have seven fighters incapacitated thanks to Daryl’s revenge scheme, Morgan chasing Carol, and Maggie’s sudden complications from the kidnapping. Seven of their best fighters just happen to be out of town the episode before the Big Bad huffs, puffs, and blows their gates in. Why stack the deck against the protagonists this way? Oh, right? They have no tension left for Negan’s arrival. All they can do is make overwhelming odds for the characters and hope it’s enough to make fans ask questions on social media, driving up word of mouth advertisement and allowing them to repost the few good things fans say or ask in order to convince everyone their poor plotting for season six was worth it in the end. Going into next week, I’m convinced they’ve lost the love of story and are simply milking the cash cow until they can switch beasts and attempt to get milk from the shriveled dugs Fear the Walking Dead sported throughout its freshman season. Basically, they have no writing integrity because they got too comfortable being the best in their genre and stopped trying to do new things. Rehashing old ideas and generalized plots is nothing new or surprising. We did most of this before with The Governor. Honestly? I get more enjoyment from just about every other post-apocalyptic show than what the Walking Dead franchise has offered in three years.